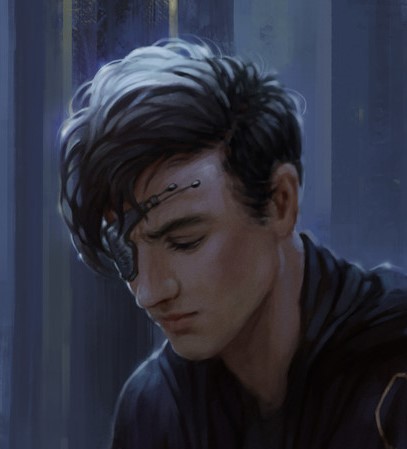 OUT OF CHARACTER INFORMATION
PRODUCTION INFORMATION
TECHNICAL SPECIFICATIONS
SPECIAL FEATURES
STRENGTHS
WEAKNESSES
DESCRIPTION
After losing his right eye to the Amalgam during a duel on Krayiss, Starlin needed a replacement. A cybernetic eye was deemed too expensive for the young Padawan, who didn't like the idea of adding more cybernetics body parts anyway. With the help of Zhaerdra Tremain, a cybernetics enthusiast, an eyepatch was developed as an alternative.

The eyepatch is still a cybernetic and is connected to Starlin's optical nerve via wires (though the outer piece can be disconnected and removed at any time). A small camera is hidden within the device, receiving input and transmitting the data directly to Starlin's brain, where it is received as images would from a normal intact eyeball. As Starlin is wont to point out, the quality of the images isn't the same as in his left eye, and his field of vision is limited - but it makes up for these shortcomings by including extra features, such as the ability to switch between nightvision, ultraviolet, and thermal vision, as well as zoom in like a telescope and even access the Holonet to read news articles, send and receive messages, and look up maps. Nifty.
Last edited: Jun 11, 2021

Very nicely made submission, poor Starlin! I hope his eyepatch will serve him well!