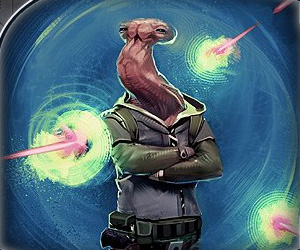 [*]Batteries: The shield is battery run, and while the batteries can replenish themselves, this takes time. Every hit that lands on the shield drains the battery, and if the battery power is entirely expended, the shield falls.
[*]Drain Effect: In order to make the shield more effective, it has been constructed with a drain effect that saps some of the energy from plasma weapons, such as blasters, back into the battery. This gives the shield more longevity or a quicker recharge, however, it cannot sustain itself in perpetuum and will inevitably falter.
[*]Blowback: One of the shield's most ingenious features is the 'blowback' effect. This optional setting prevents gathered plasma energy from returning to the battery (negating the Drain Effect) and instead lets it build up around it. When the shield falls or is deactivated, all the collected energy is dispatched in an outward blast without harming the wearer. This effect of the blast is directly linked to the amount of energy that has been absorbed and can equal a minor explosive device. However, when the blowback effect is in use, the batteries recharge significantly slower than normal.
[*]Compact: A neat and compact design makes the shield generator un-cumbersome and easy to use. It is all about practicality.
Strengths:
Weaknesses:
DESCRIPTION

The Sith Empire is always eager to reward those who spring to its defence.

When rebels struck on Jaminere, in the Tion Cluster, all present branches sprung into action to defend the acquisition of the world and its peaceful inclusion into the Imperial fold. Irrespective of the outcome of said rebellion, these individuals would be rewarded for their heroism and loyalty.

Ideas were tossed back and forth within the Imperial Corps of Engineers until someone made a rather stale pun about shields. While this spot of workplace humour earned little mirth, it did put gears into motion. What started as a joke developed into a serious engineering project, and finally an item worth gifting.

The original idea was only supposed to have the drain effect. The blowback was originally a bit of a mishap which originally occurred when the engineers attempted to make the shield impervious to lightsabers. They did not make it impervious to sabres, not without potentially exploding the batteries or making the whole object too large to be effective on the battlefield. One Dr. Pryys Desonne lost an eye during the first accidental detonation, and she became fascinated with the effect. After much research, she and her assistant were able to replicate a controlled, but slightly weakened effect. Dr. Desonne tested it on herself and found it to be quite effective.

Pleased with the Engineers' project, the items were distributed to persons of note that went to the defence of Jaminere on the Sith-Imperial side.

Stupidly in Star Wars Plasma weapons are actually only a small subset of blasters themselves. You might want to change this to just Blasters.

Also how does this react to EMP's and Straight up Electric attacks(force lightning, etc)?

I would like to say it resists and absorbs electric attacks (such as force lightning), but is shut down by an EMP. I think that would work fine to balance the resistances and not make it overpowered.

Added to the resistances

Updated wording in strengths and weaknesses to reflect it:

Filed in the EMP weakness under the "Finite" weakness:

Alright this seems okay to me.

HA! My gosh, he looks so smug in that picture!