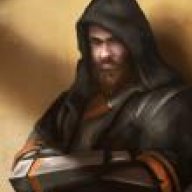 Character Bio
For two years Steven had traveled through the galaxy, taking odd jobs here and there to get by and make do. Once a proud member of the Jedi Order, a Shadow that traveled to fight the Sith and protect the ideals and freedom of the Galactic Alliance, Steven was now a frozen husk of a man. The memories of seeing his padawan hacked into quarters by a laughing sith, while watching helplessly from a distance haunted Steven. The feeling of overwhelming helplessness burdened Steven ever since that day. He could still feel the tension in his muscles and the straining as he sprinted as fast as he could, yet every time he replayed the scene in his head he could only ever get within a few meters before she was butchered.

For the last 6 months Steven had settled on Teth in the jungles. His robes and face showed just how rough he had been living for the last 6 months, his face dark from the dirt and tangled beard, and his robes filthy from the jungle and beginning to fray. The contrast was stark, from clean and noble Jedi Knight to a filthy bedraggled homeless person who people avoided. The only thing kept clean were the two symbols that tied him to the person he was before, his twin lightsabers, their dark blue hue forever standing out from beneath his cloak. Nightly they were cleaned, though from 2 years he had not ignited his saber.

The nearby village provided him sustenance throughout the year, he haggled and did odd jobs for villagers, simple tasks of chopping wood and harvesting fruit from the huge trees throughout the forest, though few trusted him, and most avoided the dark spectre travelling through their village. Rumours swirled around the small village about the spectre, though none of them good. He's an exiled Jedi, a Sith spy, a bounty hunter who killed 2 Jedi.

Through all of this time, Steven slept rough on the ground under a tree, with a small fire to keep him company. 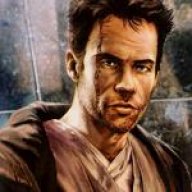 Character Bio
Teth ​
Unknown Village Road​
Avin sank back into his seat as the sputtering police speeder trudged through the rundown village lands. They had been traveling for about 3 hours since Avin had touched down in the nearby town. The local law enforcement agency had come to meet him to brief him about the issue they were facing and why they had called the Republic for specialist intervention. Avin had spent the next couple of hours gathering enough supplies for a prolonged investigation out in the wild lands of jungle and swamp before meeting the two officers that now escorted him down the winding and desolate country roads. They seemed to babble to each other in their own native language that couldn't quite place although picking out a few words of common descent from basic.

The man riding in the passenger seat light another cigar and put his foot up on the dashboard before turning around and glancing at the Jedi Knight sat solemnly in the back.

"Ay, why am I always the one that gets the short end of the stick eh."

The man blew a plume of smoke out of the window of the speeder that had slowed down to deal with uneven terrains in the road. The driver then chimed in on the conversation replying in basic to the man whilst also posing a question to Avin who was now fiddling with the holster on his belt.

"So who are you really? You come down from a big ship and talk straight to our boss, you wear funny clothes and have all sorts of fancy weapons you clearly aren't just another detective they are sending out ey."

Avin listened to the men who had suddenly started speaking to him with intent at the joking hostility that ran through their voices.

"I'll take that as the local way of breaking the ice but you both know why I'm here. My assignment to hunt down a rumored enemy infiltrator that is possibly running operations out of this area. It's my job to find if this tale holds any truth and if it does then to arrest the suspect and bring them in for questioning."

The man chuckled and then the passenger spoke again after blowing another cloud of smoke.

"What you are going to go round up Sith spies all on your own out here! Pfft, good luck with that partner."

Avin's eyes narrowed inquisitive of the man's meaning of alone.

"Well I'm not alone, after all, I doubt your boss sent two of his staff out as glorified taxi drivers."

"Ah whatever you say big timer! We are nearly there now so you can quit your moaning." The man replied before sitting upright and flicking the half-finished cigarra out of his window.

Avin sat back into his seat again and checked his commlink for connection to his command team and then checked his DE-10 was still secure in its holster as the vehicle drew to a stop at the top of a long winding path. The clouded sky gave off a dull and depressing grey look to the trees and worn down stones that separated the pathway from the boggy marshland either side. The man sat in the passenger seat ushered Avin to his door.

"Go on and investigate we will make sure that no one steals the speeder, besides a big-time guy like yourself probably doesn't need us around to slow him down."

Avin clicked the door open and stepped out.

"Yeah, right you just stay here then... Typical." Avin's last comment slipped out under his breath before he set off down the winding jungle path.

Sparks flashed into the sky as Steven threw 2 more thick logs into the fire. The weather was on the turn, and tonight would be the chilliest that it had been in a long time. Summoning 2 huge leaves over, Steven tied them to the 4 already over his head, a slight improvement on his meager dry spot from the rain that would surely come tonight.

Drawing from within his robes, Steven carefully withdrew a pristine lightsaber, the yellow crystal even now shining through the saber. Pulling a bag out of the tree and laying it carefully down, the only item beside the lightsaber he held that looked clean, he extracted a simple leather cloth that he lay flat on the ground, followed by a slightly smaller silk cloth. Delicately, he placed the Saber down, and drew 2 smaller pieces of fabrics, and then 3 tubs of various waxs and balms. Opening the first one and scraping a small slither of oil, Steven begin the delicate evening ritual of cleaning the lightsaber. The contrast between his two blades on his waist was not lost on Steven, he just didn't care about them any more.

Character Bio
The path seemed to continue winding deeper and deeper into the wooded land for what felt like hours although a more likely number would be 20 minutes. The mangled mix of sunken brick and paving had been partially swallowed by the rain-softened terrain of the Teth jungle. Avin found himself constantly watching for any movement in the treeline around him or on the path behind him yet the most excitement that followed was a flock of birds taking off or reptiles scurrying along the ground before disappearing into the thick brush that lined the pathway.

Another five minutes seemed to slip past before Avin came out to the small village. Most of the houses were either made of wood and straw or a messy attempt of cobbled stones held together by reeds and beams as opposed to any cement. The whole place looked like something of a generation-long past and yet still the people here survived with relative comfort. Avin spotted a few pieces of modern technology like a long outdated agri-droid spraying down a local vegetable plot with fertilizer.

The Jedi made his way into the village centre, the people of the settlement seemed to eye the outsider warily yet no one struck up a conversation or even made eye contact whence the black-clad Avin looked their way. He had a feeling that his welcome here was not going to be as warm as he had hoped.

[member="Steven Kavarr"]
You must log in or register to reply here.

Private The Seed of an Idea