Sanctify This Earth With Blood 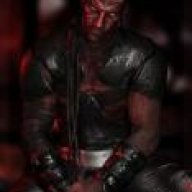 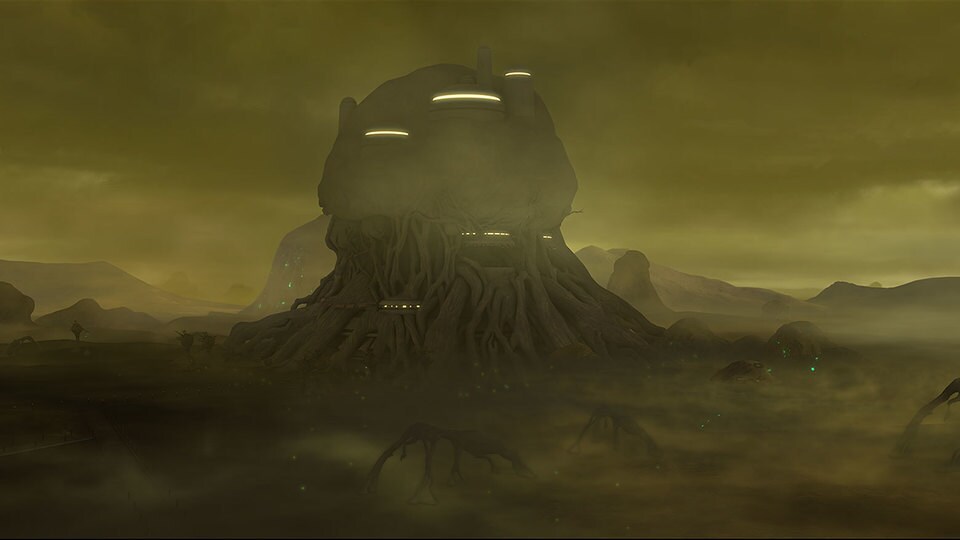 The contender fell back and tripped over his own feet as the bloodied blades attached to Salacious' prosthetic arms cut through the air, and the man's chest armor. Placing a heavy foot on the man's chest, Salacious lent his weight to the man, crushing him underfoot. Groveling, clawing at the man atop him, the Nikto was desperate for breath. For life. He'd fine none as a blade buried itself in the man's throat.

The Sith had lost count of how many he killed. He didn't care though. It was what he was born to do. As he stood, the crowd around him cheered, cried for more. He didn't care for their praise. His joy was the kill, not the glory. As he walked back through the opening to the fighter's pits, the crowd's roaring died out and silence surrounded him once more as the lift slowly lowered him down to the vaults below. Glory couldn't reach him now anyways. He was a caged beast.

The planet was also just a hop, skip, and a jump away from its moon, Nar Shaddaa.

He might go there next, if he could afford the luxury of more “him” time before venturing around once more in search of yet another traitor to the Sith.

He brushed through the crowd that was surging towards a hidden arena. He stood out like a sore hand. Skin and hair of alabaster and an entire outfit of jet black design. But, he did allow part of his aura bleed through his contrasting exterior. It was because of this, that most others allowed him about 3 feet of rom on either side for fear that his anger would snap abruptly and be turned on whichever unfortunate soul was closest to the Epicanthix.

Sheathed on his hip was his vibroswordhttps://pm1.narvii.com/6548/ff6b3b4401c53e039075d6eb659ecac843b1da77_hq.jpg, his first weapon he’d made on his own. He had bought his way into this little spectacle. The Knight also had to kill a few high-ranking lackeys of Hutt crime lords to get a seat in a booth this far above the scrappy masses of this swampy world. But, it was worth it for the amount of gore and blood promised by a desperate Hutt.

It seems that he delivered on his promise. He would keep his slick head head on his shoulders for that. There was indeed enough blood spilled on sand time and time again as crude blades cut through layers of skin and flesh after immense force was applied for such a wound to be inflicted.

In all truth, and by unspoken regulations, these bouts of strength were over as soon as first blood was spilled. But, with the Hutts running things around this place, they never ended there, naturally. They always ended with death. If the victor so decided, serious injury at the least. More often than not, the result was the former.

The red, tattooed Zabrak killed his opponent without hesitation. That was what needed to be done. It wasn’t the normal quick slaughter either. It was a series of injuries inflicted to end the Kajain’sa’Nikto before him. His was a tactic to end all future conflicts, to ensure survival, and promote his own reputation within the underworld which he fought inside of.

Kyrinov smiled once the match ended with the Zabrak’s victory. He motioned to a guard of a Hutt and whispered into the girl’s ear. The Paragon would see this...champion soon.

Character Bio
Salacious stepped off the creaking lift and back into the fighters pits, where many dirty and decrepit fighters sat, sharpening their blades, performing whatever war rituals they had. Salacious had never put much faith in such ephemeral things, whatever Gods they thought might exist to protect them, they'd be sorely disappointed. Eventually they'd all meet their ends to some blade or other weapon. They put their faith in others and not themselves, and that was their downfall.

Those who weren't sitting parted as Salacious passed, his reputation legendary among the fighters. Of course the Zabrak's legend didn't stop people from attempting to challenge him, either in the arena or in the pits. While his last challenger fought in the arena, the next attempted the pits. A Herglic stepped in front of the Salacious as others stepped aside. The whale-like being towered over even Salacious and stared down at him in defiance.

"Out of my way cur." the Zabrak growled. The Herglic spat in Salacious' face instead. The fight broke out light a thunderclap. Suddenly the pit was an explosion of teeth, fists, metal, blood. The Zabrak had tackled the Herglic, knocking it into some of the other fighters who had immediately began to fight after, a chain reaction as tempers went wild. Salacious repeatedly stabbed his bladed arms into the Herglic midsection as blood began to soak into the ground.

The guards began charging in soon after the fight started, stun rounds flying through the air everywhere. The stun rounds weren't used for the sake of the combatants. It was so they didn't lose money on dead subjects of entertainment. The prized champion was struck by one, but instead of subduing the crimson Zabrak it merely enraged him. Turning his bloodlust on the guard who had fired the round, Salacious charged, knocking people away or trampling them undefoot, at the Natuolan who began to frantically fire at the charging hulk of muscle. Most of the rounds missed, but as the Zabrak grew closer more struck their mark, blue sparks flying off the man's skin until finally he'd been stopped. But not before Salacious' blades tasted blood again, the guard's blood. Salacious fell to his knees and slumped over, eyes closed, darkness surrounding him.

The guards managed to subdue the remainder of the fighters and hauled them off to cages and cells, or threw awake them to fight the Rancor as punishment. It took three men to lift the Zabrak off the body of the dead guard, and it was only with the help of a droid that they were able to carry him to a cage and unceremoniously deposit him into it, locking the cage and leaving the man to come to consciousness on his own.

From another level, a balcony looked into the fighters pit. A teal skinned Twi'lek woman watched as the fight broke out and the the woman had to avert her eyes from the carnage. Once it was all over the woman was able to look again, and she watched as the guard's hauled the crimson man away and out of sight.

Character Bio
“The Zabrak got into a fight, M’lord. He’s currently locked away in a cell in the lower levels of what is called the Pit here,” reported the girl whom he’d sent to retrieve the fighter.

He raised a stark white eyebrow and tsked while smirking. Scrappy, it seems. Not the best for a being who had just won a match. He could’ve kept his dignity. But, to each his own, he supposed. So, with those thoughts, Kyrinov stood and excused himself from the Hutt’s presence and followed the girl after asking her to how him to the level where the Zabrak was being held for the time being.

They walked for quite some time, turning corners so many times that he became slightly disoriented. They went down five stairwells. With each level they descended, the smell grew increasingly more foul and the air became far more damp and humid than it had been in the levels that now lay above them. His only indication of any way out was the direction described as up.

Up stairs and through halls. Up stairs and past levels and levels jammed to the brim with guards as security measures.

After about fifteen minutes of walking and passing checkpoints, guards flanked them after the girl explained their reason for being this far down.

It was at this moment that he allowed his presence within the Force to leak and ooze from his pores to reveal what he was. He could feel the quiet alertness, hostility, and fear emanating from the guards who now walked three steps behind instead of two.

He stopped in front of the cell in the very back, looking down on his large body that was now curled into a loose fetal position against the metal bars that made up the floor of the cage as he knelt down on one knee.

He tapped his sheathed vibrosword on the floor as he waited for the man to wake up from his drug induced slumber, dismissing the girl and the guards which flanked him with a backwards glance before his steel grey eyes locked onto the fighter.

The Warrior's lips curled back into a snarl, baring his sharp teeth as a single eye opened to stare at an unfamiliar face like the animal in a cage he'd been reduced to. Salacious could feel the aura of the Dark side that radiated off this pale new-comer. "What is it, Dark-sider?" he asked as the quiet rasp of leathery skin on metal, and the sharper sound of metal of metal, echoed quietly, the man slowly pushing himself off the ground and onto his feet.

The one advantage of having prosthetic limbs, he didn't have to wait for feeling to return to them. The Zabrak towered over the Dark-sider as he stood to his full height, the muscles rippling beneath his scarred skin with every movement. "Come to mock the beast like everyone else? Or is there something else you want?"

Several floors up, the Twi'lek woman drew her cloak closer around her body, as if to ward away any prying eyes. She too made the descent into the sweltering Pit. But for her, it took much longer as she waited for the moment to slip past guards undetected, alternate routes to avoid checkpoints, and most importantly, avoid the fighters themselves.

Character Bio
The Exarch watched as the "champion" stood to his feet. He briefly examined his rather muscular build from top to bottom, the minute of his silver-grey eyes glinting with a small amount of amusement at what his senses managed to pick up and piece together. He noticed the atmosphere, the tension within it, shift slightly as the Zabrak glared down at his kneeling figure.
Kyrinov smirked.

"Mock the beast? That is an interesting way to address yourself. But, if I wished to mock you, I would have you released and have my own fun with you. I see no benefit in that. So, no, my purpose for being here is not to mock you."

The Knight smiled now, as he continued to speak.

"My intent is to get you out of here if you'll let me. Or, that is, if you want to get out of this place. I won't force you out of this little arena if you don't wish to leave it. But, your... talents can be of use elsewhere, in a far more rewarding fight than the bouts you expose yourself to here."

He shifted his weight to his right side now, left hand tightening and rubbing up and down on the leather hilt, wringing his hand against the heated leather.


[SIZE=9pt][member="Salacious Vexx"][/SIZE]​
You must log in or register to reply here.

When Earth Collides With Air

Blood on the Ground