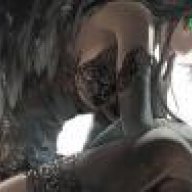 Weaknesses:
Lack of emotion: Saega was bred not to feel, but she still sometimes does.
Curiosity: Saega can often become distracted by something that perplexes her.
Socially Naive: Saega tends to shy away from people, which means she knows little about how to interact with them.

Personality:
Saega almost never speaks. She finds talking strange, and will barely say a word when around others. She is rather shy around people. She spends most of her time in the sky, or in the trees with other birds. She feels a kinship to most birds, and can even communicate with some. When in battle, Saega is ruthless. She will kill without question. She understands the concept of love, but has never experienced it before, and therefore knows nothing of it. She has no friends. The only possibility of love or friendship between her and another is if they are, in a way, like her.

Biography:
Saega spent most of her childhood in a tank. The first words she ever heard were, "She's perfect." The first thing she ever saw were a bunch of people in white clothing, smiling and shaking hands and congratulating each other. This was because Saega 001 was the first successful specimen of Project Alpha. She was a prototype. They had implanted wings and bird-like senses and abilities into her along with a dose of Force sensitivity. She was to be the first of a class of super soldiers called Winged Alphas. They bred her for the sole purpose of combat.

For the next four years, Saega underwent intense physical and psychological testing and training. She spent hours alone on a cold steel table, being poked and prodded and measured and examined. This part of her life scarred her the most. she had no contact with the outside world for weeks at a time. She felt trapped and unappreciated. When Saega thinks of Hell, she thinks of a bright white room with no windows and cold steel table.

Saega was the only specimen of Project Alpha to survive for more than six months outside of the tank. She lost her potential mate, Frenan, three months after she was taken out of the tank. Every member of her "Flock" died soon after they were out. This caused Saega to bar herself from becoming close to another person. Her fear of losing them is far greater than her fear of being alone.

After 5 years of being an experiment for scientists that were considering her execution, Saega could take no more. In one fateful night, she escaped the complex, but not before killing everyone inside it and destroying it completely. She remained in the forest for a time, living by her aerial instincts. Eventually, she found a way off of the planet. She came to Coruscant. This new world, so alive and filled with people, disturbed her greatly. When certain people discovered what she was, they attempted to capture her. She killed them. News of her skill spread like wildfire. She began receiving job offers for bounty hunting. Realizing that credits could be helpful for her survival, Saega began accepting the offers, traveling across the galaxy and killing all of her targets. She is now a secret but feared assassin-for-hire, going wherever the job demands her.

Character Bio
You, my friend, are 80% of a species.

Character Bio
Hey there! This profile would make a lot more sense and would be much more legible if you used the standard profile template. [/staff request]

I'll take that as a compliment. Thank you

Character Bio
There's the whole you're both part something completely illogical.

Character Bio
GET OUT OF HERE CALE!

Character Bio
I do what the fuck I want.

Dont be that person.

It happens often. You will eventually get use to it.

Character Bio
Now I like this idea of a person made with wings.

Damn back when I wast trying to make a person with wings I didnt think of that.

The idea came to me a day ago. It all formed itself from there....

Character Bio
Your setting a fine example… ​But in all seriousness, their is a race with wings, just have that mixed in instead of a bird.

Character Bio
Birds aren't genetically compatible with every other race in her. Their birds. They only 'work' with other birds.

I know now I think that I may make a character like that. However I will try to go away from your idea slightly as I'm going to have a perfectly fine person transformed Via Sith alchemy into a bird like creature. and I think I'll roleplay it out. maybe.

and if I have your permission.

My permission? It's your character, and as long as it's your idea, I don't mind.