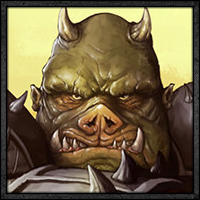 ​
RONUN HUNDREDMAN​
​
What is good in life?​
​
"To crush your enemies, ​
see them driven before you, ​
and to hear the lamentations of their women."​

[*]Personality: Despite his foreboding appearance, Ronun has an amiable personality. He likes to make new friends and has a soft spot for children, since he has several young nieces and nephews back home on Gamorr. He is exceptionally polite, but once roused to wrath he is quick to bring ruin.
COMBAT INFORMATION
HISTORICAL INFORMATION

By the time Ronun Hundredman came into Gorba's service, he was already a legend. On Gamorr, they tell tall tales of his adventures throughout Hutt Space: on Ylesia, Ronun once punched out a charging bull reek with his bare hand; on Tatooine, he buried his vibroaxe so deep in the skull of a Krayt dragon that it took ten men to pull it out; in the desert of Nar Kreeta, a sarlacc swallowed him whole, but Ronun cut his way free. Or so the stories go.

Eventually, Gorba could no longer stand hearing tales of this Gamorrean Giant and sought him out. Strangely enough, Ronun Hundredman seems happy to serve at the Hutt's behest, though Gorba is paranoid that one day the green king will simply decide to kill him. Worst of all, Gorba is not quite sure how he would be able to stop that from happening.