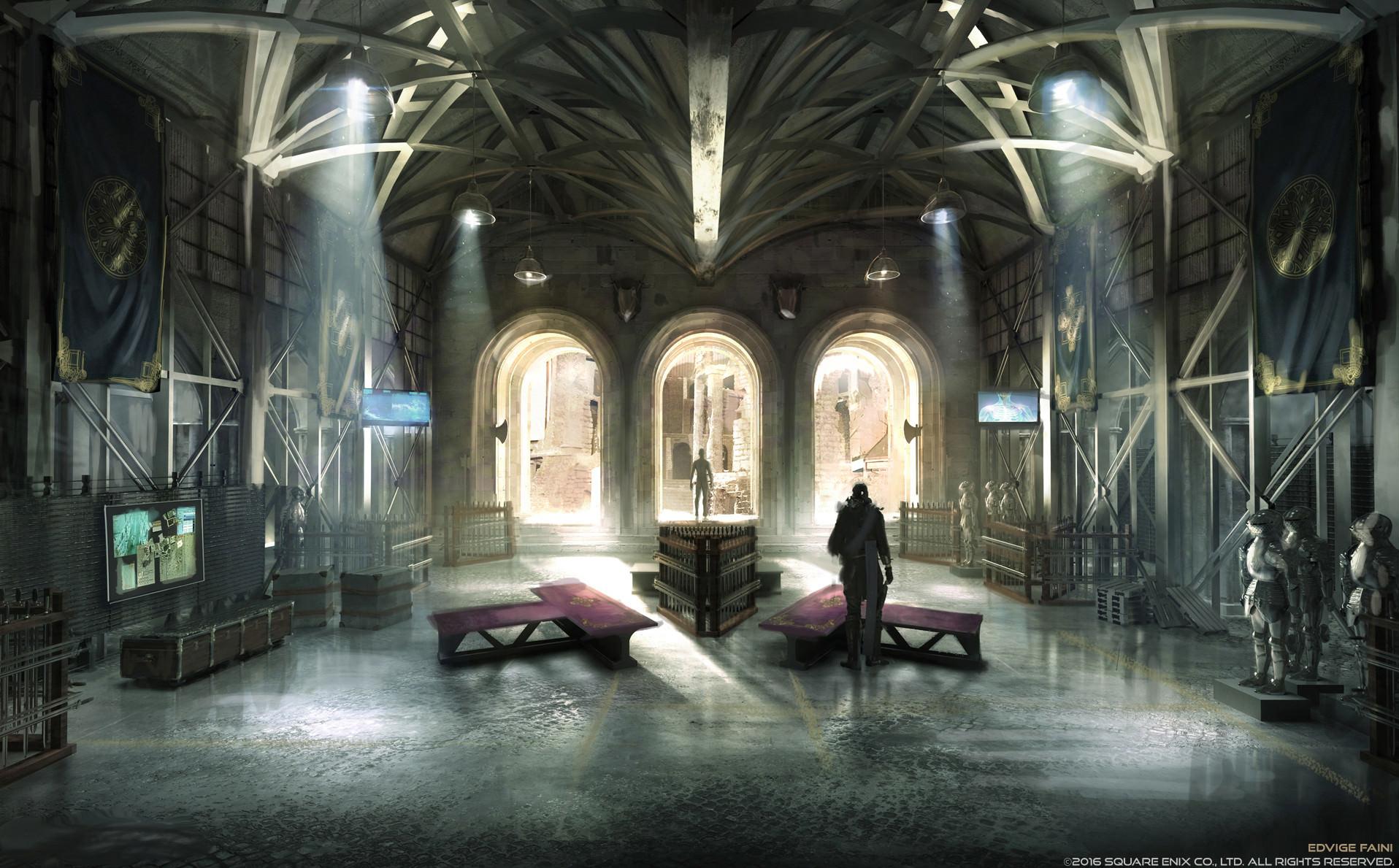 Location: Vametaye, Kuar​
The lad wasn't late, but Ijaat was hardly a student of patience anymore. He sat at the stone arches outside of the fortress. He had given [member="Ember Farseer"] a map. Told the lad to bring some clothes, weaponry, and the holocron. To be technical, he hadn't really warned him about the Gatekeeper, and that was by design. [member="Jyn Lorr"] seemed to have an easy time of it. Suspicion was, given the lofty goals of the would be Jedi, Ember might have a harder time of it.

But if he passed, there was plenty enough training here for the lad, and the man garbed in plains drifter gear would see to that. Until then? He tilted the brim of his hat down, bit and spit the cork out of the bottle of tihaar and tilted it back, taking a long pull and sighing in satisfaction at the burn, before striking a match against the slate rock an lighting his cigarra. A DE-10, his favorite sidearm, was plain on his hip and a sword rested near him, beltings wrapped around the handle.

Whether the boy survived the trials unscathed or not would be known soon. He could feel him on the planet, and close by. Then they would see.

Character Bio
The boat finally hit shore and Ember arose from his state of meditation to see the mist finally drifted away enough for him to make the stone built structure before him. It echoed of eternity and calmness...and balance. The building reminded him of Ijaat and speak of the devil - The relic Ijaat had given him to find him, which was a puzzling map leading him through a great many trials, lifted up from his hand and flew onwards ahead of him till it rested on the palm of the bearded man who sat in front of the structure.

Tired, nearly broken and extremely exhausted, Ember barely called in the Force to hold him together as he made his way towards the warrior. Deep smoke from a cigar rinsed his face as he got closer.

Ember settled the nearly empty backpack on the ground and sat on it. He had brought only his lightsaber, the Varanin Holocron and rations that had been already used during his what seemed to be eternal trials to find the man. An extremely rejuvenating aura resonated through him and energized him. The Force was strong here and in perfect balance and harmony. Fascination would've taken him into an inquisitive trance of wonder had it not been low amount of energy still sustaining him.

"That...was tiring." He said to both himself and to Ijaat before looking at the warrior. "How- no. What is this place?"

The Jedi had never seen anything like it. He would admit the enigma intrigued him.

Character Bio
"Vametaye... It's a left over site from an old Force Order. Looks like a group of Mandalorians, precursors to those that would become True Mandalorians. Some of them used the Force to build this as a stronghold in their day. It was a hub for training and an armory. As well as more, as I'm sure you can feel... Here, take some caff..."

Ijaat handed the weary Jedi a thermos, the lid itself open and having a handle like a cup. Then a packet of beef jerky and flat biscuits. Trail rations, of a sort. But each was loaded with three times the usual needed nutrients. What Ember had gone through was brutal on someone. The loftier they held themselves, the more grueling the Gatekeeper was. Ijaat remembered his own trials with a shudder, and a silent shared look with a nod and a grimace around the cigarra in his mouth showed he knew.

"You'll need the energy. And when you've got that down, i'll take you into the Fortress proper. Find you a room, then go to the Sanctum. For your training with me, we'll be here for most."

Character Bio
Ember gladly accepted the nourishment offer with a thanks and took to eating as politely as famine allowed him to while listening to the warrior before him. The Jedi had crumbled down on the ground, even standing was tiring but whatever the jerky was made of - it felt like fuel in his blood. The effect would take some time but frankly - Ember was surprised at how energizing it was.

He sipped a bit of the hot caff in his mouth feeling the much needed warmth engulf him from inside.

"I never knew Mandalorians had a Force order or at least a collective of Mandalorian Force Users." The Jedi Knight admitted, his history knowledge of prior the Gulag plague was limited mostly to Jedi stuff. "This place, it is quite...balanced." Ember looked around the building. "And it feels like a source? of the Force. The place is strong with it." He noted something Ijaat already knew.

"Thank you for your hospitality, Ijaat." Ember slowly stood up before gesturing to him that he was ready. "I can eat and walk at the same time."

"Please, do tell me more about the Mandalorians and the Force. It never occurred to me that the Force could possibly be revered in some form among the Mandalorians, perhaps because not long ago they were purging those sensitive to the Force." The last sentence came with a sigh of sorrow.

Character Bio
"It hasn't been a spiritual path of devotion that I ever have known of. More of a healthy respect, or ignorant fear, of a powerful weapon and tool. If I were to venture my guess, the ability to wield the Force is so rare, I figure those who cannot in such a martial society as my own, feel threatened by the unknown and the power it represents, and lash out, and then you have periodic purges. But I am a smith and warrior, and make only the most rudimentary of philosophers"

Grinding the cigarra out on the pavement below, he smiled and gestured within, under an arch where new and rough-hewn white wood grew. An ori'rami'kad timbered door, banded in beskar, and etched with the kyr'bes of the Mandalorian people. Even in mediums not typically his own, Ijaat's skill at crafting shone, and there was a light of pride in his eyes looking up at the massive portal, a twinkle that said "Yes, I made this, and it's like may never come again" . Picking up his sword, he cradled it in an arm as he gave a mighty shove to the doors.

A sort of echoing groan rolled out as the alabaster and bronze doors swung inward and open slowly. As Ijaat advanced, stain glass - new by the look of it - glinted from several high windows where scaffolding reached. This place was almost cathedral like, but the murals and glasswork depicted battles, a series on the Six Tenants of Mandalorian life, and more. Less a church, and more a cultural museum. The wall was lined with ancient arms, armor, and more. From mythosaur bone spears and axes to nanotech knuckledusters and a bes'bev made of the legendary metal called bes'manda, glowing softly. There were no pews in this holy place, only a sand floor covered in concentric designs, and racks of practice weapons and wooden and durasteel and padded quintans and pells for training.

To the Mandalorians, war and peace were opposite sides of the same holy, the Manda. And this place would echo that if he was able.

Character Bio
Ember's respect for Ijaat grew higher as he heard the last words of the Mandalorian. He sounded extremely humble and well aware of who he was. The Jedi wondered through what hard path one must go through to become humble when one was born and bred in a society built on pride such as the Mandalorians, or at least his knowledge of the Mandalorians had painted them that way. The Utapau crisis further supported his view.

As they entered, he could not help but notice the intricate and detailed design of the structure. It came to him as another surprise. Ember's limited knowledge and experience with the Mandalorian always regarded the Mandalorians as rather brutish, pragmatic and rough. The clear work on the details was obvious even to an untrained eye such as his.

And then suddenly it came to him -

His gaze went around inspecting the area, it looked like an armory and a place of worship at the same time. Perhaps the armory was the place of worship for the Mandalorians, he slightly chuckled in his mind.

The energy was quickly coming back to him, whatever Ijaat had given him certainly was nothing ordinary.

"How many times have you tried changing your people?" The question came out of nowhere but Ember's directness stemmed from his curiosity of learning more about the Mandalorians and of Ijaat, a man who had become infamous whether by his intention or not did not matter. Sometimes fate put you on the pedestal without your permission. It broke some people, it made others only stronger.

Character Bio
Callused and scarred hands traced over an ancient Crusader era helm, made of some sort of bone and beskar plating together. Eyes for a moment seemed lost in memory again, and indeed in part, the Force bloomed around him as he delved psychometrically into the ancient helm, feeling the spirit and deeds of his ancestors coursing through him. Pulling away, he eyed a sort of raised dais where suits of armor of almost every type and era imaginable were displayed and nodded to them with an almost wistful smile.

"No more often than they changed themselves, really. The problem was I came about it cockeyed and cock-sure, and my attitude defeated me before my words left my mouth. Except to those who already agreed with me. And in the end that doesn't get you much. I had good intentions, but Mandalorians change too fluidly to force a people wide change. In my desperation and fear, I listened to a voice of poisoned honey and let deadly words overturn my sensibilities. Mandalore paid the price for my madness. But to directly answer your question, I led four movements to try and call my people back to my Clans way before I realized that my people were my people because of the multiplicity of their identity. No clan is the same or believes or acts the same, and that is our strength."

He turned to Ember, and nodded as he smiled and walked to a side door of the same white pale wood, pushing it open. This was plain, banded in bronzium, with no device. As he descended narrow stone steps, he spoke.

[member="Ember Farseer"]
You must log in or register to reply here.