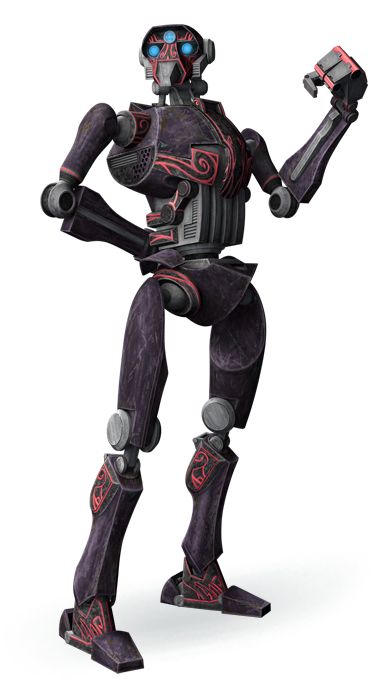 OUT OF CHARACTER INFORMATION
PRODUCTION INFORMATION
TECHNICAL INFORMATION
SPECIAL FEATURES
STRENGTHS
WEAKNESSES
DESCRIPTION
The Prototype Ultra Tactical Droid is Alterra's take at upgrading the centuries old Super Tactical Droid of the old Confederacy of Independent Systems. It took no less than two months of Alterra's best researchers working on the project for no less than 20 hours a day, sometimes even going full days without rest or sleep. These researchers dismantled five Super Tactical Droids in their quest to create, in their eyes, the perfect Droid. They even used schematics of General Grievous. The result after a month and a half of this routine was a prototype, waiting to be activated and tested.

It took researchers the remaining two weeks to completely test the Prototype, and hammer out any glitches and imperfections. However, even their most rigorous testing couldn't make it perfect. The only test to create a true Ultra Tactical Droid was to set it free into the galaxy.

The result of all their testing was a droid with arms that could separate into four, an idea taken from the schematics of General Grievous, aswell as the adaptability of the General, able to analyze an opponents fighting style during combat, and change it's own to match. However, that is pretty much the end of the similarities. The rest of it's features are either completely new, or taken from a Super Tactical Droid, and upgraded to match the times. The only drawback of this was that the researchers themselves have no idea of the complete limits of the Prototype. They cased the endoskeleton in a Faraday mesh. They constructed it's skeleton and exoskeleton out of phrik.

As a final touch, they added the combat programming and abilities of an IG-100 Magna Guard and BX Commando Droid Captain to the Super Tactical Droid, equipping it for any scenario.
Last edited: Jan 17, 2020

"We are nothing more or nothing less than what we choose to reveal." ​

Good looking sub. That said, while the resistance ratings are an optional feature of the template, we do require them to balance when employed under the new rules. Specifically the following section:

Ratings found on templates should balance. For every increase you should either reduce the production value, reduce another rating or provide balance with a genuine, significant weakness.
Click to expand...

At present this submission comes in at 5 over. Please can you adjust accordingly.

Sorry, complete error on my part, completely forgot to add them in. Let me know if anything else need's changing.

"We are nothing more or nothing less than what we choose to reveal." ​

No worries - It's a new feature, so some confusion and error is to be expected. This is a good submission in all other aspects. Easy approval.