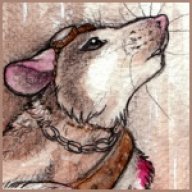 The office of the Lord Inquisitor was obvious as soon as one walked in. Open aired, every item in perfect place and balance. The interior clean without being stark, accented and elegant. There was simplicity in every line, but also quality. There was an energy to the flow around the room- not in the force but as a by product of the way it was laid out. The room felt like drinking tea from an empty cup.

Some of that was perhaps mitigated by the odd details of tiny things. A smaller door, right next to the main door for instance. The little ladder that went up the side of the desk itself. The miniature desk, looking more like a toy than anything else, on the large desk. With respect for Tai Fa and his space, Hirou kept their own desk neat, though it did reflect a little more closely the less ordered mind of its occupant. There were bits and bobs on it, a tiny holo that rotated- if one looked closely they could see that at least two dozen Nezumi had crowded into the picture, but an exact headcount was difficult. There was no console- Hirou used Tai Fa's, because no amount of miniaturization was going to accomplish what was needed, and besides, Hirou was used to it.

[member="Itash Mecetti"] was shown in for his appointment just as Hirou was scampering up the ladder to reach the top of the desk.

Hirou sketched the same bow they had when they had met.

It was certainly odd for one Itash Mecetti to walk into the Great Jedi Temple of Yavin IV... and walk into a cacophony of Saaraishash activity.

It was the office of the Lord Inquisitor, Itash could practically smell that, but here they were. Located behind the table on top of another table, with the smol mouse scampering on top of it through a small ladder that allowed the Nezumi access to the smol desk. Itash settled himself down in the chair (allowing Hirou his own time to settle down and finish whatever a mouse would do against a table like that).

"Knight Hirou of the Saaraishash." His head inclined in respect. Bemused respect, but it was respect nonetheless. "How are you feeling today?" A polite divergence of the task ahead.

He wasn't entirely sure how to conduct business with a... mouse.

But apparently Hirou held the voice of the Lord Inquisitor and the Dark Lord of the Sith. That was enough for him.

In truth, that gravity did not come particularly naturally to the Nezumi. So it dropped a moment later, Hirou's ears flicking forward as they bound on all fours over to their desk. Perfectly sized, clearly custom made with attention to detail, they settled behind it.

"Very well!" Hirou said brightly. "I like Yavin. It's so much nicer than Bastion, so the move here has been a very good one."

Of course, it wasn't just Hirou. The majority of the Tabigarashu clan lived here now as well. Not all of them worked for the Saaraishash, but a good number did, and all appreciated what Tai Fa had done for them. While Hirou was not one of the clan leaders, they held a particular place of respect as the primary conduit between the family and the Sith Lord.

"And you?" They inquired in turn politely. Hirou understood that the climate of Yavin didn't agree with everyone. Some humans in particular found the jungle air oppressive.

The act of breathing air causing water to enter his lungs. This caused Yavin to be an 'issue'... somewhat. In truth it wasn't even nearly enough to be a real problem for someone who was relatively at ease at Coruscant. ...or maybe it just wasn't a problem for Itash Mecetti, Lord of House Mecetti. In truth he had realized long enough that some problems were less problems than they were simply issues.

Issues that could be easily resolved by glancing at them in a particular way.

"Mm, it took me a little, before I got used to Yavin, I will be honest." Itash disclosed a moment later, because there was no point to lying here. Maybe if it was someone like the Emperor of the Sith that Itash would attempt to make himself seem stronger.

But in the moment?

There was no point as far as he was concerned.

"It is my understanding that the Emperor has given you the authority to deal with this question?" He was sure that Kaine would want to be involved anyway, but it did make things easier to not have to worry about having to go through several layers of bureaucracy.

Character Bio
There was a slot in the chair to accommodate Hirou's tail, and they shifted to get comfortable, appreciating it.

Folding their paws on the desk in front of them, they weren't set eye to eye with Itash, but it was perfectly acceptable. Honestly, this was normal and Hirou was accustomed to looking up at everyone anyway.

"I am here with the authority granted by both Lord Carnifex and Lord Saarai," the small creature said. Despite the high pitched tone, there was something very serious in their voice.

Hirou didn't seek out power. Indeed, the Nezumi was mostly concerned with their ability to be useful rather than any intentions to climb ladders within the Empire. And yet, each time they came forward with the best they could offer, that was what they found. Someone nudging them another step up that ladder.

At barely ankle high, Tabigarashu Madara, known to most people as 'Hirou', had been given the authority to treat with him from two of the most powerful beings in the Sith Empire.

Mostly, it was bemusing, but Hirou always did the best job they could.

"I have received the proposal and looked over it." Hirou paused, pulling some Nezumi sized bits of flimsy over from the corner. There was someone now who's job it was to transfer large documents into smaller versions and Hirou found it very helpful.

"There are.... some stipulations."

The proposal was rather simple in its concept, but elaborate in execution.

In essence Didact Defense Solutions and the Sith Empire would seal a deal, where they agreed to tight cooperation that would result in quite the profitable conclusions for both parties. The first example of that at work was an elaborate upgrade deal handed to Didact's construction arm. They had been increasing and enhancing their automation expertise for quite some time now. Didact would be put in charge of upgrading all of the industrial infrastructure of the Sith Empire throughout its territories.

Furthermore the defense contractor would be put in charge of training the auxiliary troops that the Empire recruited from newly-expanded worlds. This had the benefit of freeing up the Legion, so they could focus elsewhere.

"I am listening." Itash nodded after a moment. It wasn't a surprise to him that the Empire had some sort of additional requests here- they were a nation that had rapidly expanded over the years. They were cautious, almost paranoid, being basically put in charge of the modernization of the entire military-industrial complex of the Empire?

That was a tricky thing.

"Didact is prepared to accommodate any reasonable requests."

Character Bio
"Primarily, it has to do with over sight," the Nezumi answered promptly.

This discussion had already been had. Hirou knew exactly what the Empire was willing to risk...

And what it was not.

"The agreement that Imperial Engineers and Officers would not merely be present but directly involved, while having full access to plans for individual locations would be paramount and non-negotiable."

Tai Fa had said that. Hirou would have worded it different but it had been very important so the little creature had committed it to memory instead. They tilted their head, whiskers quivering and watching Itash. Honestly, Hirou was not accustomed to this sort of interaction. But they had watched Tai Fa at it enough times that they thought they were doing okay.

It was strange how Hirou could simultaneously look grave, imperial and..... cute.

But Itash let that fall by the wayside in favor of the conversation at hand, because it was imperative that this was done right. This deal -- if accepted -- would propel Didact Defense Solutions to new heights. Heights that would be very beneficial for him in the long run. The concession was... well, Itash wasn't going to say he was perfectly happy with it.

But it was better than expected.

"I see." Tash thought about that for a moment. "Very well, but I would like to request that Didact Defense Solutions is included in the vetting process. We have expertise in it and that would make this a bit more comfortable on the business side of things."

It was that he didn't trust them.

Character Bio
It was not an unexpected return, considering what they knew of him and his company both. It had already been discussed and Hirou knew what the appropriate response was.

"The Empire will offer the candidates we find best suited for the work," Hirou responded with a nod, "And final say on which will get the assignment from those lot's will fall to Didact. We understand that there are always potential issues of compatibility and comfort. We cannot give you free access to full personnel files, but you will have them for the potential candidates."

Allowing Didact into the Imperial files was simply not going to happen. This way the empire could offer a pool of appropriate candidates and Didact could choose. It would open those individuals to scrutiny yes, but part of it was of course choosing only individuals that could afford that. People that the Empire had nothing about them that required hiding.

Tai Fa, Ophidia, and Kaine were paranoid. But without that trait, the empire would not have made it as far as it had.

In truth there was no consideration after that.

Oh, for propriety sake Itash had a moment of pause as he considered their words, but there wasn't really a point to argue here. Getting access to their official files for every Imperial that was being considered would have been... well, Itash would have loved it, of course. But it wasn't exactly a realistic proposal as far as Tash was concerned. He would have grown concerned if it was.

Because that would have changed the optics of their competence to him.

"That will be sufficient, Knight Hirou." A nod followed soon after that. "I think our administrative departments can sort out the rest, I would hate to deprive my lawyers and clerics from doing their job."

He was paying them for something after all.

"Unless there is more on your mind, I will leave you to your work." And so it would be- unless Hirou had more to say, they'd exchange farewells, bid adieu and Itash would exit the office in kind. It had been a quick meeting, but that was why they had exchanged intentions prior to this meeting. To keep things streamlined. Instead this had simply been a reaffirmation of intent and an opportunity to discuss potential hang-ups.

In this scope that was a success.
You must log in or register to reply here.

Mastiffs on the Prowl [TSE]

The Nightsisters are their Sith
2

Down on the West Coast, They Got Their Ticons
2