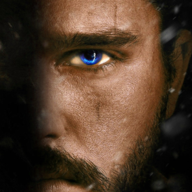 After receiving the title of Norbæn Véurr (Northern Lord) from the High King, his uncle [member="Thyrian Hearthfire"], Théo Heavenshield began his commission immediately. He had spent several months in the Northmark getting to know the people and gain their confidence, also to scout out the best possible location for a new city that would become the capital of the Mark. He called upon the knowledge of the local people, gathered around him the best of craftsmen and women, hunters, traders and labourers and anyone willing to lend a hand in the establishment of the new city.

From the small village of Fafnersvik toward the south, once plans were in place and all the resources they required were found, they all set off for the fens, the journey would take them several weeks.

For the first month, Norvegr-fen was little more than a city of tents and make-shift workshops, the forgers ran hot all day and night and the constant sound of the Smith's song as hammer met anvil, became the beating heart of the people and the city itself. There was much skepticism in his choice of location, many had considered him mad of it, but Norvegr-fen was going to be more than just a new city but become the hub of the Northmark from which the trade of the abundant natural resources would see them prosper and grow.

It would take time for the new city to grow and reach it's full potential but the foundation stones where in place and from them the city in the north would thrive.