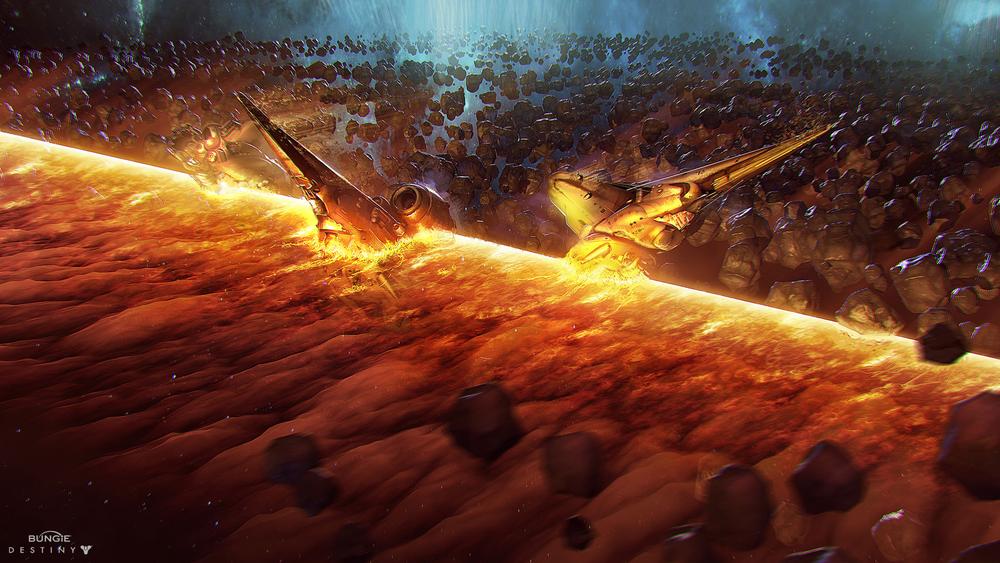 OUT OF CHARACTER INFORMATION
PRODUCTION INFORMATION
TECHNICAL SPECIFICATIONS
SPECIAL FEATURES
Strengths:
Weaknesses:
DESCRIPTION
Whereas the traditional tractor beam merely seeks to trap its target and prevent it from escaping, the Tesseract was built to make your foes shake in their boots.

Or that is, at least, how it’s advertised. And you can never trust a marketer – doubly so if they look suspiciously like the guy that mugged you in an alley last week.

Trust issues aside, the idea behind the Tesseract might be exactly what the tagline says. And, in a controlled environment, it works. Unfortunately, as any seasoned spacer knows, opponents rarely show the courtesy of staying in place while you’re trying to blast them out of your backyard. It’s poor manners, really, but it’s the truth of the matter.

In practical applications, the weapon is best used against slower, larger vessels. Smaller corvettes and below are simply too prone to buzzing to and fro, and missing a shot that needs half a minute to recharge simply isn’t worth it. Thus the Tesseract has evolved into something of a sleeve-ace; brutally effective, but only if used right.

This has been removed from the archive for a second chance. Please give me a day to review the submission and get back to you with suggestions.

I apologize (again!) for the delay.


Nadir said:
Fatal attraction: Relatively speaking, the weapon’s beam serves to effect the gravity of a planet upon a target the size of a credit chit.
Click to expand...

This is essentially the piece of the submission which causes a lot of ambiguous and vague potential issues. Applying the strength of a planet's gravitational force to a singular space in order to physically tear apart entire starships is teetering on the border of superweapon. In the examples shown, what is being done is that droids are magnifying the strength of the gravitational force to anchor themselves to the ground, essentially, artificially increasing their weight. Obviously that wouldn't quite happen the same way in space.

In order for a gravitational force to have enough power (theoretically) to pull apart something like a starship in space you would need to have an immense amount of energy, more so than that of just a planet. For example, what is believed to have caused the Whirlpool Galaxy. At present, all that would seem to happen would be a tractor beam effect.

If we step into the realm of suspension of belief and leave astrophysics behind, I can see what you're getting at in terms of idea, however this leads us back to the superweapon issue. So, in order to avoid stepping on that landmine, what I would suggest is that the range at which this is used becomes drastically weaker the further you are from the object you are targeting, with its strength optimally at rather close range. Additionally, I would state that this is not a weapon whose effect is immediate and worded in such that it reads like:


Nadir said:
the Tesseract was built to rip ships apart like so much wet paper.
Click to expand...

Nadir said:
atomize their vessel and/or crew
Click to expand...

These are both problematic statements, implied or not.


Nadir said:
Its power may be focused on an area as small as a cockpit or as large as a whole squadron of X-wings; but it will be focused.
Click to expand...

This bit here is a tad much. I wouldn't want to see this being used to declare that the bridge of a ship where the captain happens to be standing is being targeted from half a system away with no logical means to actually target something that relatively small at such an immense distance. It's getting into the zone of calling damage without specifically calling damage. Generalize this more to a concentrated field of fire, and allow the defender to decide the exact spot.


Nadir said:
Even a capital ship would find trouble running multiple systems alongside one of these bad boys.
Click to expand...

I don't want to see multiple of these on a ship.


Jamie Pyne said:
I would suggest is that the range at which this is used becomes drastically weaker the further you are from the object you are targeting, with its strength optimally at rather close range. Additionally, I would state that this is not a weapon whose effect is immediate
Click to expand...

Nadir said:
At close ranges, the Tesseract is capable of slowly tearing materials apart through artificial magnification of weight – the increased strain often results in various structures giving out.
Click to expand...

Nadir said:
Reach: The destructive power of the weapon exponentially decreases the further out its target is. At long ranges, the Tesseract simply becomes a tractor beam; an imposing tractor beam to be sure, but still just a tractor beam.
Click to expand...

Rephrased the problematic stuff in the description.

Jamie Pyne said:
Generalize this more to a concentrated field of fire, and allow the defender to decide the exact spot.
Click to expand...

Nadir said:
Pinpoint: As a beam weapon, the Tesseract is a relatively accurate – in terms of space battles, anyway. It can hit the designated target without much issue, but aiming at specific structures is impossible unless a big ship enters close-quarters range.
Click to expand...

Nadir said:
Flexibility: Despite its advantages, beams aren't all sunshine and rainbows. Outside its line of effect, the Tessaract does... exactly nothing. If you miss, even if by an inch, the target will breeze onwards on solar winds, utterly unscathed.
Click to expand...

Jamie Pyne said:
I don't want to see multiple of these on a ship.
Click to expand...

It wasn't meant like that in any way; the opposite, in fact. I've reworded that bit to make the limitations on these clearer:

Nadir said:
Even a capital ship would have trouble running any other special systems alongside this bad boy; and you can just forget about installing more than one.
Click to expand...

Basically anything else that's power hungry (redundant shielding, HIMS, big capital guns, etc.) would need to be turned off or forgone entirely in favor of the Tesseract.

Hopefully that addresses all of your concerns.