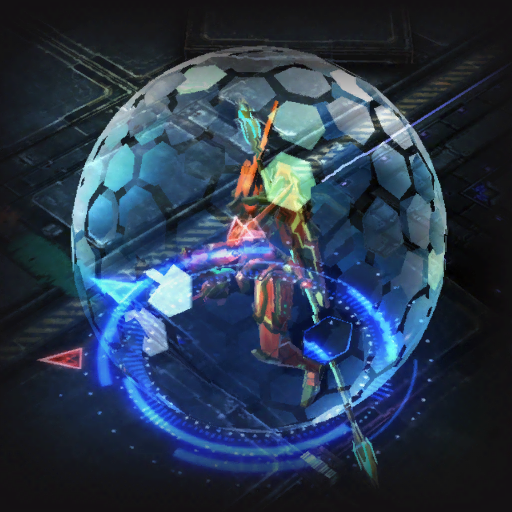 OUT OF CHARACTER INFORMATION
PRODUCTION INFORMATION
SPECIAL FEATURES
Strengths:
Weaknesses:
DESCRIPTION
The Myntor Personal Shield is Lucerne Personal Defense's first foray into the realm of personal shielding. While motivated to be exceptionally competitive in the field by the successes of pioneering industry giants like ArmaTech, LPD actually turned turned to a more obscure and older shielding type for the basis of their system: the Xythan Force Shield. Originally developed for use on droids like the JK-13 security droid, LPD took the technology and modified it for use by organics. Unlike many energy shields, the Myntor's shielding does not present itself as a nearly invisible, continual placid sphere. Instead, it appears like a swiftly rotating sphere of cyan-tinged hexagons. Each hexagon is actually its own distinct energy shield facet, meaning that it operates independently of the rest of the shield hexagons. This means that each facet is relatively weak but easily recharged. However, because these hexagons are constantly rotating, it means that sustained fire or contact usually effects multiple facets that are rotated into place before or as the previous facet fails. This makes the shielding more resilient to rapid fire blasters and contact weapons like lightsabers, though it is conversely weaker against slower-firing weapons that are typically more powerful and penetrating. Realizing that many threats on the battlefield do not come only from energy weapons, Lucerne Personal Defense included a secondary modular slot within the Myntor to allow it to equip other types of more specialized shielding to allow its users to better adapt to different types of enemies and environments. This slot takes up approximately forty to fifty percent of theMyntor unit's power, making it about as formidable as the Xythan Force Shield. While a variety of devices can be easily plugged into the scomp-link and power supply of the shield with some modifications, the following are common aftermarket-options supplied directly by Lucerne Personal Defense:

Xythan Force Shield: This module is actually a duplicate of the main system, however, its shields rotate in the opposite direction of the primary shield, which lessens the ability of more powerful weapons to fully pierce through these energy shields.

Particle Shielding: This module contains a particle shield generator, providing the user from protection from slugs, shrapnel, many melee weapons, and other threats of a physical nature. This is probably the most commonly used auxiliary slot. Those who use it conjunction with a physical weapon, such as a slugthrower, often synchronize it to their helmet's HUD to allow it to briefly flicker off when they fire their own weapon.

Sonic: This shield is actually a sonic dissipator, which rapidly reduces incoming sound waves to a fraction of their volume and power. This not only protects the user's ears from loud noises, but actually breaks down the ultrasonic waves of sonic pistols, blasters, and other like weaponry.

Radiation Dampening: This shield absorbs and protects against radiation from both artificial sources (like reactors or radiation grenades) and natural sources (solar winds, etc). This is most commonly used by spacers onboard starships (especially when engaging in salvaging operations) or scouts on radiologically contaminated worlds.

Thermal: This shield provides an exceptional amount of insulation to the user, protecting them from extreme differences in cold or heat. This is useful to protecting its users from extreme environments and exotic weapons like flamethrowers or cyroban weaponry, but it does not provide protection against blasters, slugthrowers, and most common weapon types.

While the base Xythan shielding unit is commonly run in conjunction with the secondary shield, it is possible to only divert power to one of the devices to boost its effects through the Myntor's capacitor overcharger. Overcharging one of the shields does not double its power, however, as the base shielding components are not able to fully withstand that power surge with remaining small enough to fit in its compact package. Instead, maximum protection in the overcharge mode is around 140-160% of its normal power depending on the shielding unit involved. It is possible to shift energy supplies in different ratios to either of the shields though, such as 75% to the Xythan Force Field and 25% to a particle shield further allowing the user to customize the shield to different situations. The shield can be further customized by altering its radius. By default, the shield only encapsulates the user and the immediate objects that the user is carrying. However, it is possible to expand the shield's radius up to three meters, allowing it to protect others in the immediate vicinity of the user. This setting comes with a number of limitations however, including lower relative shield density and the problems of battlefield coordination. As an example of this, someone could not leave the protection of the shield without the shield itself being deactivated, as the Xythan Force Field would fry them. Because each Myntor is fairly small, the only visible external controls are on and off switches for the main and auxiliary shield unit, and a powerpack release and insertion lever. The other shield settings must be altered through using the scomp-link port, either through a datapad, droid, or personal armor interface.

Myntor is entering a crowded market, and Lucerne Personal Defense is conservatively betting that it will not achieve high market penetration. However, the company's association with the Directorate as ensured a small, steady production which supply certain personnel and units within the group. However, it is expected that numbers of units will find their way into the hands of other groups with similar leanings to Lucerne Labs. LPD has decided to incentivize their sale by including them in packages with its armor suits, notably the Anakkona Heavy Armor.

This is just a personal shield, there are many many many of these in canon.