"Grey" is not a crack about my hair color. 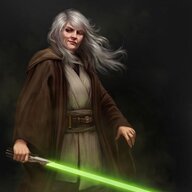 Character Bio
In Margaret's considered opinion, Hutts were among the most repulsive beings in the galaxy. Not because of their eating habits, mind. Or their general lack of hygiene. Or their resemblance to overgrown slugs. No, her distaste was borne from long years of experience. If every Hutt in the galaxy was to suddenly transform into the human ideal of beauty overnight, they'd still be the slimiest creatures around.

She knew that, however well founded her prejudice might be, it still wasn't right. Not in a moral sense. All creatures deserved to be judged on their own merits, not for the collective sins of their species. Unfortunately, every Hutt she'd ever met had been determined to live down to the stereotypes.

This one was no different. Garbola or Granola or some crap like that. Big, nasty bastard a few centuries old. He had a thing for running spice and using teenage slaves as mules. The roving Jedi Master had caught wind of the plan when a 13 year old boy, scared out of his mind and stuffed with so much spice that it was a wonder he could move. Customs picked him out as being nervous, and in a panic, he tried to run. Ruptured one of the containers and died of a massive overdose. What was supposed to be a fun trip back home had turned into a murder mystery. Margaret hated murder mysteries.

She had been around enough that she wasn't much bothered by a bit of spice smuggling. Generally, Margaret found that attempts to control the stuff were pointless. If anything, they just drove the prices up and made the business more lucrative. As far as she was concerned, what people put into their bodies was their own business, and if someone wanted to provide it to them, well, there were worse ways to make a living.

But using slaves, using kids, to run the stuff, now that pissed her off. And so, here she was, in a seedy hotel lobby, waiting for her backup. Some Jedi woman she'd never met was supposed to meet her here. That was all the help she'd been promised when she notified one of the nearby Orders. There was a war on, after all. Killing Sith was apparently more important than saving kids.

She snorted, then lit up a cigarette. Whoever was supposed to show up, hopefully they'd get here soon. They had a long day ahead of them tomorrow, and it was past her bedtime. 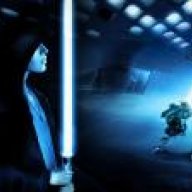 Character Bio
Incompatible work style. That was the phrase the Jedi Master used about her partner for this mission. And that was why, even though she had left the Order, she had been contacted to work for the Jedi. Just this once. Because of a significant difference of philosophies and incompatible work styles.

Adelle thought that was the dumbest thing she'd ever heard.

Na'an hadn't protested—mostly because Adelle told Leigh instead. And here she was, on Nar Shaddaa once again, far closer to the Hutts than she liked. The Jedi contact had directed her to a dingy hotel tucked away in a poorer district as the rendezvous. The doors opened to a dim interior, years of dirt caked on the walls and dust over most of the aging decorations. Beings as grimy as their surroundings milled about in an empty lobby. The weight of her lightsaber sitting at the small of her back felt comforting. A human woman probably fifteen years her elder at least sat at a table, dragging on a cigarette. The only source of Light in this place came from her. Force she actually hated interacting with strangers. Adelle kept the grimace off her face and approached the table.

"Grey" is not a crack about my hair color.

Character Bio
The elder woman couldn't help but breathe a sigh of relief. In her experience, Orders liked to answer calls for help from roving Masters in one of two ways: send another Master, or a newly anointed Knight. The Masters usually came because Margaret's reputation as a bit of a rebel proceeded her, and they wanted to limit the damage she could do in their domain. The Knights usually needed blooding, and were too annoying to accompany a real Master.

This [member="Adelle Bastiel"] woman didn't seem to fit either description. She lacked the wide-eyed awe of a greenhorn, and wasn't nearly sanctimonious enough to be a real Master. Still, there was something off in her aura. Margaret was no one's idea of a therapist, but she'd learned to hum a few bars and dance a few steps when it came to figuring out if something was wrong. Wasn't her problem, not really, not unless it interfered with work. And since she seemed to have her ducks at least in the same pond, the aging Master let it pass without comment.

"That's me," she replied, and gestured to the seat next to her. The hotel's decor was as cheap and tacky as one might expect, but surprisingly comfortable. "Pull up a seat, and we'll have a quick chat before turning in for the night. You have a place to stay yet?"

Character Bio
Adelle hooked a foot around one of the chair's legs, pulling it away from the table. She dropped into the seat, catching a whiff of mold as she did. It was, however, surprisingly plush and she leaned back in it to stretch out. [member="Margaret the Grey"] seemed as Jedi as Jedi could be; Adelle couldn't figure out the "incompatible work style" her contact mentioned.

"Just landed," she said. "Figured this place'd do as well as any."

A drink might be nice but based on the money sunk into the hotel's upkeep, Adelle doubted they'd have anything stronger than watered down homebrews. "A chat'd be nice. Our friend was slim with the details. I prefer to know what I'm facing. Old habits."
You must log in or register to reply here.