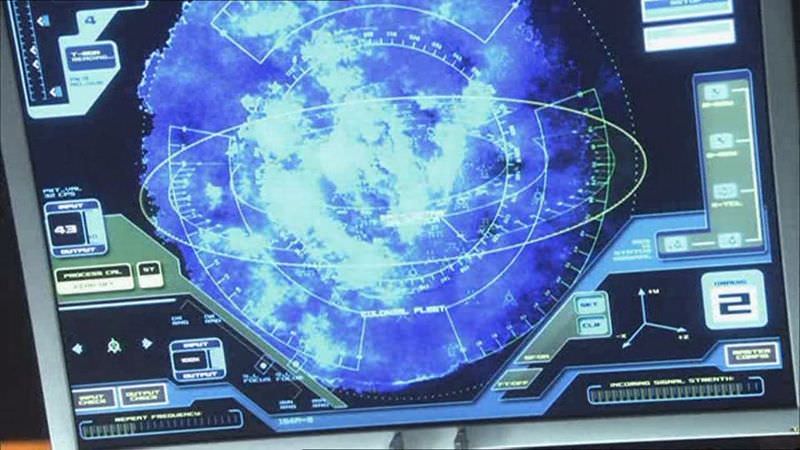 The Metis Sensor Array is fully integrated network of sensors carefully placed across a ship's hull and finely tuned to form a composite picture of the space around the warship. Metis Sensor Arrays are unusual in that they invert the range focus of typical sensor types in order to better harden the vessel against electronic warfare: rather than using full-spectrum transceivers(FSTs) for long-range detection, the Metis uses an older but more rugged variant of electrophotoreceptors: electrotelescopes. Rather than using visual sensors for short-range work, the Metis instead uses dual-band FSTs. This unusual configuration is a product of Admiral Quee's experience of increasingly encountering electronic warfare on the battlefield.

By its very nature, sensor jamming relies on the ability to add to and obscure existing sensor signals. The obvious answer to counter that was to use passive sensors that couldn't be jammed electronically: visual sensors. Because many common electrophotoreceptors lack the range and resolution to act as good targeting sensors for long-range attacks, Lucerne Labs turned to older technology: the electrotelescope. Computers and sensor operators can zoom in and out on areas, enhancing knowledge of target not only by magnification, but by the use of filtering software and other enhancements. The built-in energy sensors of electrotelescopes allow Metis to gather more data about the selected target, though they are more susceptible to jamming than the simple magnification. Relying on visual magnification alone also means the sensors are narrowly focused, producing more blindspots for a ship to slip through unnoticed, especially at longer ranges. But the ability to accurately launch long-range attacks despite heavy traditional sensor jamming was deemed well worth it.

For shorter ranges, the electrotelescopes are ill-suited. Their narrow focus and slow tracking makes poor for fast threats like fighters, small ships, and munitions. To that end, the Metis incorporates dual-band full-spectrum transceivers. These dish-like sensors are always mounted in pairs, with one dish producing sensor pulses with long wave-lengths and another with more frequent but shorter wavelengths. This makes these FSTs much shorter-ranged than sensors typical of their size, but it also means that they are not running on the same frequencies used by more common models of FSTs, and thus less likely to be subjected too the brunt of simple brute force jamming. As the dishes are located together and thus share a similar view of space but working on different frequencies, sensor noise can be more easily filtered out as constant signals found on both sets of sensors are likely to be real objects rather than the noise of simple sensor jamming. This allows the sensors to better cut through sensor jamming and other means of electronic sensor obfuscation to find out what truly exists on the battlefield. This provides Metis-equipped ships with good tracking of objects in close range despite sensor jamming, but the insensitive nature of the FSTs also means that positive identification of what it is tracking is not certain: ships of similar design will appear to be indistinguishable from each other on a FST screen (such as a Tie fighter and Tie Interceptor or a Z-95 or X-wing) which can lead to some priority targeting issues. Using the FST network effectively at close range then is also reliant on IFF transponders and the visual sight of organic sensor and weapon operators.

These two basic sensor networks comprise of the sensor suite's scanning capabilities, but other sensors are integrated to work in concert with these two sensor networks to provide a more comprehensive understanding of the area and to better provide targeting data to the ship's sensors. The common DER found on almost every military starship is present here, and frequently acts as a middleman between the electrotelescope and FST networks, having a wider focus than the electrotelescopes and a longer range than the FSTs. Because the DER is a passive device, an energy scanner supplements this device by its ability to actively scan and seek out objects and phenomena, whether its weapons charging up for battle or the tell-tale radiation of ion drives. Heat Particle Detectors fill a similar role to the DER, providing an method to consistently track objects both far and near. This most often allows the electrotelescope and FST networks to seamlessly pick up tracking where the other lost track as they went out of range, but the heat particle detectors are also important for their ability to track fast-moving fighters and warheads at close range. Lastly, the Metis incorporates macrolaser trackers for use as targeting lasers with the added benefit of being able to estimate possible projectories of its sensor tracks. This is notably serves as the baseline measure for the modified OSS-CI unit's ability to fully integrate the other sensors for a composite reading.

Connected to all of these sensors by Biolux Organoform Circuitry and augmented by Calor-series Biocomputers, the OSS-CI unit works to integrate all of the information gathered by these sensors to make a composite picture of the space surrounding a Metis-equipped ship. By combining this information together, simple statistics becomes information which can be acted upon. As an example of this, an FST signature can be matched with IFF codes and DER reading to fully identify a craft, its abilities, and with the aid of the macrolaser trackers, its probable headings. In other words, his units primarily programming is designed to use all the information collected by the sensors to figure out all the information needed for simple fire control purposes: direction, range, and distance. OSS-CI can also interpret additional data provided by the sensors to understand vulnerable points in an enemy (such as weakened areas of shielding, damaged subsystems, etc) and provide this information along with firing vectors to the ship's weapons. This is not always to perform however, especially with sensojr jamming which could obscure some tracking. To help combat this, Metis not only can form a composite picture of the object being tracked, but can also allocate numbers of electrotelescopes and FSTs to focus on a sensor track, using triangulation to better target an object that may be hidden by sensor noise or an inherently stealth design. This also works for stellar navigation, where movement cannot only be tracked by inertial guidance systems, but by triangulating the light of distant known stars much like an ancient sextant. The OSS-CI unit can also import and export data from its systems, allowing to act on information from other ships if its own sensors are damaged or to gain information from different vantage points.

As sophisticated as Metis is, it's useful is only as good as the sensor operator or the commander behind it. This is largely because while its sensors are designed to better penetrate through the haze of ECM warfare, the technical limitations of sensors mean that a lot of interpreting known data and guesswork of filling in blanks requires organic oversight. A knowledge of the local area and expected opponents is also needed to get the most out of this system, especially because Metis does not provide the situation awareness that most sensor suites automatically provide.

Metis is likely to be found on many upcoming Lucerne Labs warships, but its unusual configuration an its inherent limitations means that it will not likely be on other ships that are looking for more of a general purpose sensor suite. Even then, it seems more likely to be found on firepower heavy warships in order to ensure that their firepower isn't nullified by recent ECM advances. Current Directorate doctrine recommends pairing Metis-equipped warships with sensor scoutships like the classic Agave-class Picket Ship in order to maintain situation awareness before fighting occurs and to provide for more routine scanning purposes in non-combat situations.