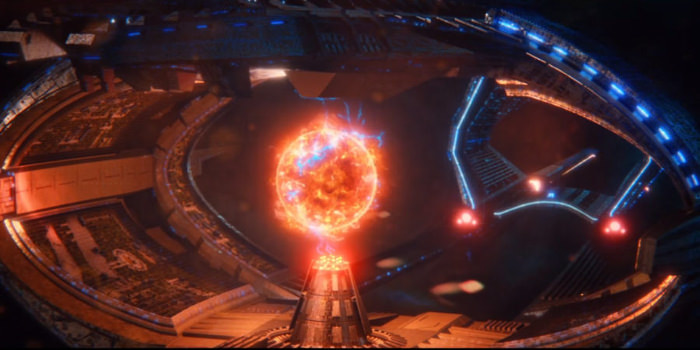 Stellar Core: The Charon-series utilizes a proprietary blend of Mechanicum and SoroSuub technology to simulate the effects of stellar fusion on a miniaturized and thus containable scale. Suspended at the heart of a large reaction chamber, massive amounts of energy are siphoned off from the artificial star's chemical processes for use in powering starships and other technology far more efficiently than standard cold fusion.

Containment Field: A critical component of the Charon-series that makes the entire technology remotely feasible, each star core is surrounded by an electromagnetic containment field whose function is threefold. First to shield nearby crew and passengers from the core's intense levels of solar radiation, second to prevent the Charon from siphoning off excessive amounts of energy that could cause a nova-triggering chain reaction, and third this field is reinforced by powerful antigrav wave technology to compensate for the core's significant density.

Redundant Deflector Grid: Needless to say any damage sustained to the star core or its containment field could be catastrophic, and so even on ships with significant defenses all Charon-series come equipped with a redundant layer of deflector grids. An outer molecular shield, and both ray and particle deflectors underneath. This is to minimize the risk of a breach as a result of either space combat or attempted tampering.

The Charon-series Stellar Fusion Core or Star Core is the culmination of a union between the Mechanicum's starship manufacturing congregation and the energy harvesting division at SoroSuub Corporation. Effectively it is the creation of a miniaturized artificial solar fusion core, which is then suspended in an electromagnetic containment field and surrounded by a protective layering of deflector shield technology.

While the risks associated with such a process on a destructive scale are quite severe, there are also significant benefits. A starship equipped with such a device could maintain all systems at full power simultaneously for brief sustained periods. As with all forms of energy production there are of course drawbacks, placing too much strain on the system by taxing it continuously comes with a serious risk of containment breach which could be just as deadly as an explosion.

Due to the reactor's new, relatively untested nature accompanied with these destructive drawbacks, it is only a successful proof of concept for the scientists at SoroSuub. However their partners in the Mechanicum with a much more artificial perspective on the device's cost benefit analysis are already examining the possibility of putting the Charon-series into practical application.

I am actually okay with how this currently balances out. Presumably from your wording it is not equal to a whole star(since that would basically put this into the range of such devices as a Star Forge), but closer to being just better than standard reactors.

I am going to tentatively approve this. With the understanding that the RPJ or admin may not agree with me on my interpretation.