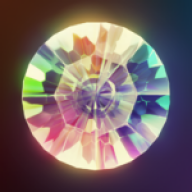 STRENGTHS AND WEAKNESSES (Required: 2 Weaknesses Minimum) :
Strengths
Force Sensitive: Lunar is able to sense and use the Force, in turn she is able to be sensed through the Force.

Telepathy: As in the case of Sense, Lunar was able to use the Force in order to help her telepathy, extending it to members of other species so that she can communicate with others through it.

Energetic: As opposed to other crystalline beings, Lunar is not as patient, she is lively and loves doing all sorts of activities as soon as possible, and to travel.

Valorous: Lunar is not afraid to charge head-first into battle, in fact she prefers it, enjoying chaos of battle as opposed to slowness of her boring homeworld.

Curious: Lunar has never seen much of Galaxy except her homeworld for over 4,000 years, now she is thirsty for adventure and to explore as much of it as possible.

Energy Resistance: As all Rainbow Gems, Lunar possesses the ability to survive large amounts of energy flowing through her, as such, she is able to be used in a lightsaber as the focus crystal without feeling pain or dying.

Bardic: Lunar loves singing and storytelling, both listening to it and performing herself.

Weaknesses
Immobile: As a crystalline being, Lunar needs another vessel in order to interact with a world, as well as a voice box in order to communicate with beings who are not affected by telepathy.

Impatient: As opposed to other members of her species, Lunar is very impatient, preferring to go into combat over talking and having a slight case of ADD.

Bloodthirsty: While Lunar is not evil and will not harm a civilian or innocent, she is not very keen on taking prisoners once she does go into combat.

Annoying During Combat: Lunar has the personality of that young boy you meet online when playing FPS, the one that, even though you're way older than him, you just cannot kill, and he still keeps killing you, not wasting a chance to rub it in your face and remind you just to which degree he "pwned" you.

Inexperienced: Unable to travel, Lunar still has a lot to learn about the Galaxy and her abilities, as a Force-sensitive Rainbow Gem, she is extremely rare, there was not anyone around who would be able to train her in the Force and what she knows, she has learned herself.
SHIP:
None

BIOGRAPHY:
At the age of 4,800 or so, Lunar can be considered a young adult among her people. Growing up in one of the rare hidden clusters of Rainbow Gems, Lunar often grew bored, unable to do much besides staring out into the starry skies, dreaming of how one day she would be there, among the stars, free and shining.
She always knew that she was different than her kin, sometimes she felt ripples, life somewhere out there, but she was never able to reach it. Whenever outlanders visited her planet, she learned how to sense them, and even how to speak into their minds, but yet, they were never unable to find her.
So there she lies, on her home planet of Gallinore, looking outwards into the sky, the window of Galaxy, singing with her kin and weaving tales of adventures, adventures perhaps one day she will be able to experience.

KILLS:
None
BOUNTIES COLLECTED:
None

I look forward to when our characters meet, if they meet...

Sorry, she'll be introduced into galaxy after a story arc as partner to my main character @[member="HK-36"] and train with him

Lol, I could see her just sitting on a table, when somebody sits by it she starts rolling slowly towards them, screaming into their head with telepathy
"Deeeeeeeeeeeeeeeeeeeeeeath!"
And just drop off of the table next to them

Character Bio
Man! I cant have a talking crystal.

Character Bio
That would be FANTASTIC rp, much needed xD

Too bad you're not Diathim.

Diathimi need more infamy or renown or any kind

But I think it would be fun to rp out the relationship between her and HK when they start training together and learn to act and fight as one, with her being the sword, and him guiding her, when the two of them are about the same age but with quite different personalities.

You're starting a relationship with yourself? lol!

Kinda, yeah, I mean I thought about asking somebody else to write for Lunar, but that would mean I would have to keep poking them and nag them to reply whenever we go into a fight and they would have to be roughly in the same timezone as me. 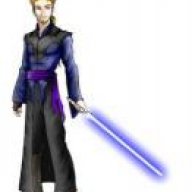 Why not become a iron knight? x) Implant her in HK to give him force sensitivity x) Thats what the force shards did.

Character Bio
I want to put her in a lightsaber. That way, she can levitate and attack people on her own.

Actually, she will be both, she won't be a shard riding around in HK's body because that would either mean that he won't have any control over his own body, or she will be riding around without any control just shooting out force powers for him, and ICly he wouldn't be cool with any of those options since he likes to control his own body and he prefers not to use her like that

So yeah, in the story arc HK will travel to the remnants of the Iron Knights from the New Republic to gather information on the vessels they made, surprisingly, he had little contact with them, he will give Lunar a vessel like that in order to communicate with her at first, with help of a Force sensitive to find her, and she will be using it in her free time to explore the Galaxy and adventure as she wants.

But she will also be a lightsaber crystal and learn how to act with HK as one being, her being the saber, him the body, training as a Bladedancer and Iron Knight with him, etc., as the concept of being the thing that actually cuts through people appeals to her so much

If you've ever seen the wonderful web comedy show Journey Quest, the Sword of Fighting is an inspiration behind her, as well as Enserric The Talking Sword from Neverwinter Nights

Pandeima said:
I want to put her in a lightsaber. That way, she can levitate and attack people on her own.
Click to expand...

I'd imagine such a process would be painful to the rainbow gem, having energy course through your body, though I may be incorrect.

Thus, when Luke levitates an X-Wing on Dagobah(Not moving it up, merely holding it in place) he exerts a force of 334000 Newtons of force. Assuming the rainbow gem is put into a lightsaber and exerts that same force, divided between levitating the lightsaber an pushing the end of it to spin it the lightsaber would spin at a speed of 333990 m/s after being pushed that way for a second, using T = 2piR/V we get it takes 2.45 * 10^-6 seconds to spin once, or better yet it spins 408 thousand times a second.

So yeah, if you don't block spinning lightsaber of doom it chops you into 400K slices. Would be rather effective.