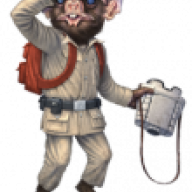 ADVANCED SYSTEMS
NightBlind 472: When it was first created, the worry of piracy groups trying to identify if the ship was armed caused alarm. This required the NightBlind 472 to be installed, allowing it to only be scanned properly when less than half a kilometer away from the target.
Nightshadow: This is required to hide the Photon Bomb launchers that are on the sides, concealed as engine generators.
S-c4.1 multi-range TAG: Required for the turret gunners and main pilot to keep targets on check and separate.

Strengths:
Weaknesses:
Description:
Born from the idea of bombing select piracy targets, the transport was concieved from abandoned designs from old generations past. As one of the first designs from Hot Destruction Company, they made do with what they had. The NightBlind 472 and S-c4.1 multi-range TAG was from requistioned supplies and was installed with good haste with engines being overhauled with Spread Photon Bomb Launchers, hidden in the compartments. However the scanners on each test run revealed their payload before getting to close, requiring a coating of Nightshadow. While it was expensive, it allowed them to pass by regular scanners and stations that were the test targets.

On the eve of the true test, the SLAM was installed as a last notice as the speed was a constant issue after dropping the payload. When the Linked "Shoulder Bash" Bomber was sent out for its maiden voyage, it select a XQ-1 station for its target with the crew count of six people. Getting close for a docking procedure, the engine sides concealing the cluster bombs spinned downward and fired its full payload, destroying a large section of the station and exposing the station, quickly afterwards using the SLAM to get out of the area of combat then hyper out. Considering it a success, it was put into production and has been a slight success in certain regions though rumors of pirates using them has caused concern as of late.

Character Bio
Please note this is with my character. Something goofed on the send function and have no idea how to change it, sorry!