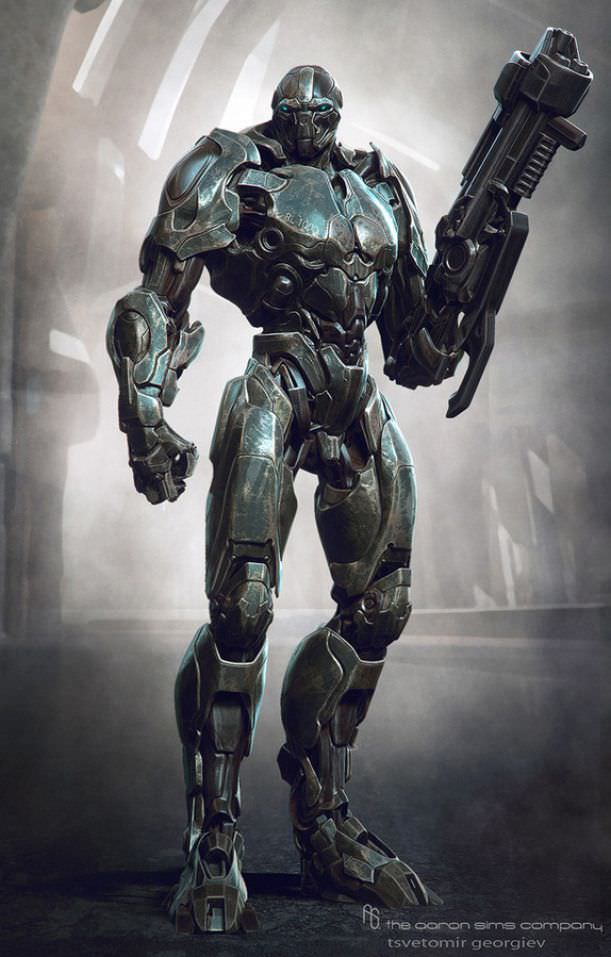 SPECIAL FEATURES
Strengths:
Weaknesses:
DESCRIPTION
The Legionnaire Battle Droid is a hefty and conventional battle droid designed to act as heavy infantry, particularly to supplement smaller battle droids such as Lucerne Labs own IX-6 Combat and Security Droid. Unlike the IX-6, the Legionnaire is a committee design that attempted to carefully pull elements of other successful battle droids into a single, mass-produced package. Most of the droid's heavily armored chassis is influenced by the FLTCH-series battle droid, though there are also clear YVH droid elements visible in the droid's head as well. Like YVHs, the Legionnaire also incorporates a specialized sensor suite optimized for detecting threats for its secondary role. Other elements borrowed include ionization buffers from the SD-9 and the assault cannon from the Phase 2 Darktrooper. Yet despite this proliferate borrowing, the Legionnaire not only manages to seamlessly incorporate these features into a single design, but it also managed to incorporate some innovations of its own.

Perhaps the most unusual feature of the droid is its right arm. While at first it appears to be a simply powerful hydraulic arm, the armored palm actually conceals a magnetic attractor, which allows it a limited ability to manipulate many metals on the battlefield at short distances. It originally was incorporated as a means to quickly snatch or move objects away from a distance, such as unattended weapons or live munitions, but it has also been surprisingly effective in hand to hand combat. In this capacity, the droid can firmly hold onto opponents wearing metal-based armor or pull objects like swords and daggers towards it. This is further heightened by the right hand's other unusual feature, the inclusion of a quartet of vibrocutters on the inside of the palm that are designed to shred whatever is in the droid's grasp. Aside from its use as weapon, these cutters can also be used to carve through obstacles, such as bulkheads or impromptu barriers thrown in the droid's way. Combined with thick armor plating and powerful hydraulic appendages, this can make Legionnaire's terrifying in close-quarters combat.

Aside from their use as basic line battle droids, Legionnaires are also employed as bodyguards. All of the features that make them effective battle droids have direct and obvious parallels to protecting others, but the Legionnaire also features some minor refinements of its own for its secondary role. The most salient of these is the inclusion of a weapon's detector sensor suite, which allows the droid to better detect potential threats before they reveal themselves. It also includes a programming subroutine in which the droids prioritize and attack threats based on the danger to their charge. The droids will also not hesitate to arbitrarily carry or move their charge if needed, or even act its shield. Because of these traits, it's not uncommon to find several in the surrounding of VIPs or areas where they are expected to be encountered, such as command centers or political rallies.