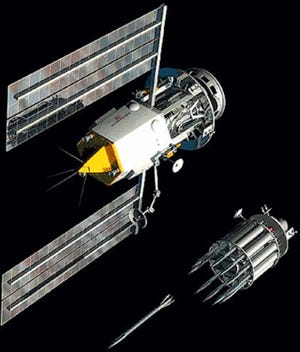 DESCRIPTION
The kiss was designed to be a new type of projectile weapon with the potential to deliver not only physical damage, but ionic as well. The presence of the capacitor allows the rods to be charged prior to launch, or to be charged by electrical anomalies/EMP fields while in flight. Proper targeting can stealthily put down a large vessel, as the rods are never larger than a starfighter, meaning they are likely to be mistaken for space debris at times. The emplacements fire a maximum of twelve rods before needing to be reloaded, and each rod is sized appropriately to the vessel firing it. The smaller the vessel, the smaller the rod. These magnetic weapons can be affected by strong magnetic fields, meaning they much be accounted for when firing, but their range is theoretically infinite thanks to being largely a piece of metal that is sent flying through the vacuum of space. The rods, constructed of a titanium and silver alloy, are both strong and conductive, making for an effective weapons platform, and even if the rod doesn't cause impactful damage, then the electrical burst it unleashes will do work. These weapons are not effective for anti-starfighter engagements, and are meant primarily for capital ship engagements. Firing them on a planet can prove incredibly destructive without the fallout of most warheads. Care must be taken when firing in the vicinity of a planet.
Last edited: Apr 22, 2020

Tylane of Isobe said:
The rods, constructed of a titanium and silver alloy, are both strong and conductive, making for an effective ship killing tool, and even if the rod doesn't kill it, the the electrical burst it unleashes will do work.
Click to expand...

I understand that this is stating its effectiveness against ships, particularly capital ships, but this sort of language is pushing the envelope here. We don't permit things which, in essence, destroy ships/kill PCs/and so on in a designated number, or implied number, of hits. My request is to tone down this specific sentence, quoted above.


Tylane of Isobe said:
Firing them on a planet can prove incredibly destructive without the fallout of most warheads. Care must be taken when firing in the vicinity of a planet.
Click to expand...

I'm going to give the same note I gave to the other submission for rods used for planetary bombardment - using this in an attempt to wipe out an engagement area, or attempt to effectively force damage onto writers on the surface of a planet, or any other significantly large area of destruction will more than likely result in this being reported and removed from the approved section.

If the intent is to use this as a nuclear option in RP where other PCs will be affected, I would only suggest doing so with cooperation with those writers to avoid the above from happening.

As for the second that's duly noted but it's not my intent for these to be used in such a way. I included that language as a warning to others who may use them to be careful where they shoot these.

Moved to pre-factory as per OP request. Please remember to provide a list of changes when you tag a member of factory staff to move the submission back to live judgement.

John Locke
Update to affiliations made. No other changes appear necessary. Ready to move.

Please fix the links and the image before I move this back to live judgement.

Do you have permission to use Lucerne Labs as a manufacturer?

John Locke
I write Lucerne Labs character Killian Holmes, so yes. The whole point of these edits was to give them access to the tech since they worked with the RR back in the day when it was a major faction.

I understand that, however, anyone can claim that they write a character affiliated with the company. Could you please either provide a screenshot of Gir giving you permission to use Lucerne Labs, or link to a page on Chaos that establishes these permissions.

Niamh is me. He also liked my post above.

Thank you for adding that.