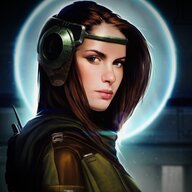 Part I​
​
I consider myself a rather skilled pilot, a good shot, and I can assemble a droid and modify an engine like nobody's business, but I wouldn't go so far as to say I'm the best at what I do. I know there are other technological geniuses like me who've had the benefit of training and education. Me? I'm a hands on, do it yourself kind of guy. I've been in a few scrapes here and there, but hand to hand fighting isn't quite my specialty. I'm much better at getting myself into trouble. Sometime during my adventures I lost my sense of self preservation, and if I don't wizen up, I might just loose my head as well. Or get fed to a sarlacc. My greatest skill? I can swear in a dozen different languages. Hutteese is my specialty.

My sensitivity to the force has been both blessing and curse. I can see things before they happen, though the images are distorted, like a reflection in a broken mirror. I can feel strong emotions, sometimes even hear thoughts... but so too is my mind open to the cries of the dying, the nightmares of the fearful, and the desires of the insane. Sometimes I don't even know if my thoughts are my own. Ale helps. Spice is better, but only in the silence of deep space do I find true peace.

Part II​
​
Synlindwhir helped purge me of my addiction, well most of it, and taught me how to block foreign thoughts from intruding on my own. I'm an even better slicer now -- I was already the best in the known regions -- and I'm planning to build my own battle droid, since I always find myself in heaps of trouble. After joining the Jedi, I found myself swept into 'remedial' training, learning the basics of lightsaber combat and sensing the Force. On the former, I'm passable, but on the latter, I'm a 'genius'. Really, the Force and I are like old friends. Now that my mind is my own, I see and feel and hear the Force everywhere. It's pretty amazing. Of course, this was after I learned just what the Force really was... after a little trouble on Cato Nemoidia.

​
​
Despite its antiquity, the YT-2400 is fast, tough, and endlessly modifiable. Kale's YT-2400, named affectionately as 'Star Spinner II', is 18.65 meters in length, and is armed with two 1D servo turret laser cannons; one mounted dorsally and the other ventrally. The ship has a total of 13 weapon emplacement points. The extra points allow for easy modifications to the stock frame.

With double-armored durasteel hull plating and a bulky engine, the Star Spinner can easily handle the strain of deep-space combat. The vessel has power to spare and an oversized hull good for hot-rodded engines and powerful weapons.

The Star Spinner is configured with a pair of starboard bracing arms that connect to the cockpit compartment, essentially a long tube. The aft section of the cockpit tube contains the primary escape pod, which seats six. The bracing arm's interior space is used for crew quarters and living space.

The rounded hull area is devoted to cargo holds and ship's systems. A second escape pod, as well as the airlock, is located on the far side of the cargo compartment, directly opposite the bracing arms.

Tee Nine is a pain in my ass. I suppose it's my fault; I haven't memory wiped him in almost a decade, and R9 units are notorious for self-updating. Still, he's damn good at what he does, and he knows my ship even better than I do, what, with all his modifications; my own modifications and his own modifications. He's a bleeding heart as well, always beeping about helping the needy. He also downs me for my habits. It's not like it's my fault I need spice. I didn't ask to be able to hear peoples thoughts and feel their emotions. Still, he's a friend, albeit an annoying one.
​
Rex: RX Series Pilot Droid

Rex isn't half as annoying as T9. He keeps to himself mostly, content to pilot the ship. He can be a bit... chipper, and somewhat of a worry wart, but he's learned to turn it down in the mornings. I pieced him together from scraps of disassembled RX droids when I was 12, and developed his protocols myself. Maybe that's why he's such a damn good pilot?

BIOGRAPHY:
​
Sand was the general theme of my early life. Sand, and heat. Life on Tattooine was nice. Simple. Or rather, as simple as could be for a boy who heard and saw too much. I raced speeders through valleys, shot wombats with blaster rifles; the usual childhood activities. I never had many friends - I was the weird boy who finished people's sentences - but I had enough. I had wanted to be like my father - a pilot, with his own ship and crew. I never knew my mother, and my father, silent type that he was, almost never spoke of her. He thought of her though. Constantly. Her dark red hair, her husky voice, her amber eyes. At those times, I was grateful for my ability to see the unseen and hear the unspoken. I never would've known my mother otherwise.

Eventually my father saved up enough credits smuggling for the Hutts to purchase a protocol droid to mind me while he sailed the stars, and I became the fifth member of his crew, the 'Star Spinner'.


I had thought life was nice on Tattooine, but it was nothing compared to the vast quiet of space, the tranquility of that massive nothingness. There were no thoughts to hear in space, no emotions to feel, and my father's men were neither loud thinkers now deep feelers.


Years passed. We smuggled goods and people from one side of the galaxy to the other, and everywhere in between. I worked as a mechanic, as a pilot, and once in a scuffle against a pair of pirates, as a gunner. I learned to navigate the stars. I built droids, and engines, and weapons. I learned to curse in different languages. I had my first sexual encounter with a Twi'lekian dancer. I discovered the mind-numbing pleasures of Correllian Ale, and better even than that, I discovered Spice.


Then "it" happened. I snapped. The Zabrak often tortured the men and women who's cargo he stole. Tortured them, sold them to slavery, and kept some as slaves himself. I lived with their pain and their death until it became too much to bear. One moment, I was refurbishing the repulsor coils, and the next, I was staring down at the lifeless bodies of eight space pirates. A part of me had been afraid. A larger part had simply been indifferent. Those men had deserved death. Or worse.


I rechristened the ship Star Spinner in memory of my father, freed the slaves, and within a few months, had established myself as a reliable smuggler, albeit one lacking a living crew. R9-T9 handled repairs, and 'Rex' served as my co-pilot, both heavily modified by years of tinkering. Life wasn't so bleak on my own, without the tortured minds of slaves to cloud my thoughts. It wasn't so painful.


Years passed. I met a jedi named Iella E'ron by pure luck, and Force have it, we discovered that we were related - brother and sister n fact. She and her master helped me escape the iron grip of the Hutts, and I taught her a thing or two about outer rim scoundrels. But sadly, our paths were to take us to different places; Iella went on to become a master of the order, and I? I went back to what I knew best.

The Force was not to be denied, though. Eventually I found my way to the Jedi.