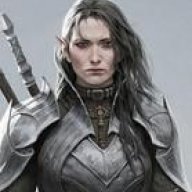 Biography:
Kaida Taldir was born in a family of lower caste Eldorai, though they were not mere commoners. Her family lived in the city of Naldasa, a minor town about 100km from the capital city of Santaissa, the city most open to foreigners. Both her parents worked in the local administration, but while her mother Diya had a good job as chief of accountancy, her father had the less significant position of data entry clerk in the department of master data maintenance.

Kaida was born shortly after her elder sister Lavina started school and the two were quite close during their childhood. This was a period of great changes and upheavals for the people of Kaeshana, who had for millennia lived in splendid isolation, secure in the belief that they were the only intelligent and most developed race in the Galaxy. The Plague and the Four Hundred Year Darkness had been conducive to such notions, but now outsiders were finally finding their way back to Kaeshana. Some came as merchants, eager to trade their goods, with the resultant culture shock that they possessed superior technology, but others came as pirates and raiders, eager to murder, pillage and enslave. However, at this stage the Taldirs saw very little of foreigners. For one the monarchy was eager to keep them at arm’s lengths, though it eager to adapt their tech to its own use to strengthen the kingdom. Moreover, most foreigners congregated in Santaissa and the Taldirs were more focused on their own survival.

Much like Lavina Kaida was in a rather traditional system of education, learning how to read and write from a male servant – having one was a way for the monarchy to make all Eldorai women feel united in their superiority despite the fact that there were strong class barriers – and later beginning junior schooling at the age of ten. As a student Kaida was quite gifted, one could say precocious, though her bossiness and due to her having a bit of a know-it-all attitude did not exactly make her win popularity contests. Her powers first manifested at the age of sixteen when Naldasa was hit by a flood.

Kaida, who could not swim, watched her parents get swept away by the tide and was caught in it. Seemingly helpless and in an act of desperation she unconsciously drew on the power inherent to her and froze the water in front of her to create an ice floe and subsequently managed to crawl onto it, effectively floating on the water for several hours before she was picked up by a rescue team that had been searching for survivors on a ship. Lavina arrived too late, but took Kaida to the Academy as they were two members of the family left.

As the dictates of fate or perhaps changed would have it, this event would lead to a profound change in Kaida's life. Force-users were highly valued in Eldorai society. Indeed, being able to harness these powers was the best way for lower class elves to rise up in rank. However, control and use of the Force was highly regulated by the government, which was mindful of how dangerous uncontrolled force-users could be. In this way Kaida was no different from other Sciians, or force-users, and quickly found herself taken away from her school by official edict and enrolled in a government academy meant to train Sciians and make use of them. She was shaken by this tragedy, feeling isolated and lost in the government school. For a certain period of time she was resentful and not a particularly good student and as such risked disciplinary action because she seemed reluctant to use her power.

However, eventually she drew strength from the tragedy, using it as a spur to become as good as she could be in her studies. Once Kaida was brought to the ‘Academy of Four Powers’, she also got a stronger bond with Lavina, who took a bit of a protective role in regards to her. At age thirty she joined the Angelii Istrai, the young angels, and underwent training in the use of weapons and how to use her powers for combat purposes, specifically a support role, and she displayed great enthusiasm at her training. However, her training in the Young Angels was not without its share of trouble.


Kaida had a habit of frequenting the Foreign Quarter, even though the trainers at the academy tried to keep the sorcerous soldiers in training on the straight and narrow of Eldorai orthodoxy, along with a few friends she had acquired. Alas, tensions between foreigners and natives often tended to boil over. Rather ironically, given her xenophobic views, Kaida ended up in a public brawl with members from the Nebula Front, zealots who believed the Eldorai people were being morally corrupted by contact with ‘foreign devils’, especially ‘human monkeigh’, and the import of foreign holomovies and music. She wounded one of them severely though not fatally with ice shards before the fight was broken up by palace guards. Needless to say this was a bit of an embarrassment, especially since some elven aristos covertly backed the Nebula Front, and as a consequence she was put back a class. Later after becoming a full Angelii she started her tour of duty at a remote garrison in a mountainous region.

Much to her disappointment, she did not get the chance to face actual combat against the ravenous groups of pirates and slavers that dared to attack the chosen people. Over the years she rose to the rank of Wing Leader, the Eldorai equivalent of Corporal. She quickly picked up a knowledge of Basic as more and more outsiders came to Kaeshana, bringing foreign tech and in some cases foreign ideas with them, as dangerous as those could be.

She did some voluntary work in the palace archives in her off-duty hours, taking an interest in the tale of Malya Hendilan, one of very few Eldorai to leave Kaeshana and become Jedi Knights and, as far as the elves knew, the thief who had stolen the Ardithae Codex, perhaps the most sacred of tomes the elves possessed.
Alas, her rather low rank kept her from interacting with foreigners at length, aside from at times performing guard duties when visitors arrived.

Her life underwent a profound change when Jedi Master Phylis Alince and Omega Colonel Siobhan Kerrigan travelled to Kaeshana in search of the Codex and Lavina wound up getting embroiled in what could be called the Codex Conspiracy. When Lavina decided to go with the offworlders and see the stars, after little hesitation Kaida decided to come with her. Time will tell whether this was a decision for good or ill...