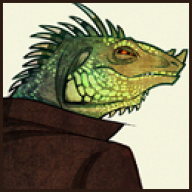 STRENGTHS:
Lemme Just Get Naked Jimmy can change the colour of his skin to match his surroundings. Or just because bright orange is the new 'in' thing. Of course from a camo perspective it's only really effective without his clothes on.

Fly Anything If there is even a moderate chance that it can get off the ground, Jimmy can fly it. Not only that, he can get it to do things it's inventor never even imagined.

WEAKNESSES:
Is It Cold In Here? Jimmy is cold-blooded, he likes to keep his workspace toasty. If it gets to cold he slows down, hibernates and eventually dies. He will not be vacationing on Hoth any time soon.

MSE Droids Hurt My Mouth Jimmy has an uncomfortable tendency to try and eat Mouse droids, or anything else small enough that 'moves like prey'. Intellectually he knows it's metal but..

Oooo, A Shiny! Jimmy really loves ships. A lot. And ship parts. And ship blueprints. Who cares if there's a firefight going on around him, a lizard has to have his priorities, and Jimmys are ships.

SHIP: "I just like flying them. I don't want to have to pay to fuel or fix one."

BIOGRAPHY:
Jimmy was born and raised on the planet Aar. One out of a clutch of fifteen, he did not get very much attention from his mother, but since the Aar'aa are one of the races where not eating your offspring qualifies you for a parent of the year award, this has never particular worried him. At the ripe old age of six, as the Aar'aa mature quickly for all that their lifespans are relatively long, Jimmy got his first job flying a garbage scow. It was dirty, stunk, handled like a bathtub, was about as graceful as a three legged cow and broke down every Tuesday like clockwork. It was love at first flight.

Eventually he got fired when his employers found out he was using the scow to take part in illegal races. They found out because illegal or not it was considered funny enough that his stinking rig won against some of the better off's vehicles actually designed to be flown at any speed that it made the paper. Since someone actually managed to snap a picture of the scow nosing it's way past a custom job it even made front page.

Since then he's taken any flying gig he can get and seen a fair chunk of the universe, and has no intention of stopping anytime soon, though a steady gig wouldn't go amiss!

BOUNTIES COLLECTED: "I'm available for hire! I can turn the clunkiest ship on a dime, you need a get-away pilot, I'm your..er..lizard." 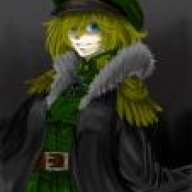 Character Bio
Think with your dipstick Jimmy - Some commercial.

For the love of God no one ever tell Jimmy about that commercial IC. Everyone will get whipped, and then Iggy will likely beat him.

I also wonder if discovery channel will come and video tape him. Just imagine it.

"Oi! look at dem lizard that can fly them space ships! Don't worry though, em's trained to do that sorta thang."

Fifteen minutes could save you fifteen percent or more!

*preens for the cameras* But so help me if anyones thumbs come near any of my orifices that person will have a limb bitten off!