Private It Belongs In My Private Collection 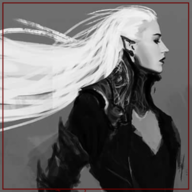 All it takes is a couple rumors of an artifact here or there to find her ears. After the fall of the Sith Empire and the sacking of her families estate on Dromund Kaas, the Library that had held so many artifacts, holocrons, knowledge, had been looted. Ransacked. Vandalized. For a while she hadn't cared. Now? Now she did. Atollon wasn't a world she knew too much about. The Sith Empire used to control it, way back when. Or did it? Perhaps it was the Bryn.

Didn't matter. The world and it's desolate landscape wasn't why she was there. The rumors pointed to an auction for it. Not that she intended to wait for the auction. Her shuttle landed a click away from the warehouse, where she'd go on by foot. Handle this herself. Reclaim what had been lost herself. Dressed in the black plate of her armor, wielding the black blade she'd ended up rather fond of using. A silohette of death, stalking towards the front door.

The guards didn't know what hit them. They raised their blasters, barked out their commands for her to stop. Failing to register that their friend and partner had already been cleaved in two. No mercy. No hesitation. Alina spun to the first, who had only just realized she was standing there beside him, and brought the blade straight down to cleave him in two. Then it was time to continue in. The door wasn't going to be enough to keep her out. 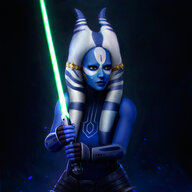 Character Bio
​
Shani finished playing a tune on her Shinobue before returning it to her belt, pulling the cloak tight and its hood over her head, blanketing the top half of her face in shadow. Of course she had to be the one the council sent to this forsaken wasteland. Atollon - the planet had been scarred by years of battle, from the Brynadul purges all the way back to the first "Galactic Civil War," For a mostly-ignored desert planet covered in dry coral, it amazed Shani that the atmosphere always seemed to be tense, and the planet always seemed to be the centerpiece of struggles between dark and light, chaos and balance. Bogan and Ashla.

Using the centeredness her meditation had given her, she began to let Ashla guide her to her target. Apparently some intel officers working support for a delegation on Lothal had picked up whispers that some ominous artifact was being auctioned off. The council figured that it might be some sort of Sith artifact, but with most of the knights tied up shoring up control of Nathema, they were forced into sending Shani. It came as a small consolation to her that, at the very least, she shouldn't face too much resistance from just a bunch of smug-

Pain, Death. Something's wrong. The deaths of a few people sent out a ripple through the force that even most Jedi and Sith would miss, but the dark presence surrounding their deaths amplified them to a shadow trained to feel the smallest of twinges towards the dark side. Drawing the light of Ashla within her, Shani cloaked herself in the force, so that to another force user she would appear just another, regular individual, unremarkable. Nonetheless, she began to dash towards her target - peering to see a shadow far off in the darkness. It seemed her supposed lack of resistance had just became a real fight. Her montrals could pick up the miniscule sounds the assailant made as they continued their assault.

Bearing the sharp canines her race's carnivorism had bestowed her, Shani reached under her cloak, placing a hand on her sword. While she hoped she could go without using it, this unknown dark-sided interloper had just effortlessly dispatched several guards, without so much as giving them a chance to surrender - only a fool would enter such a situation unprepared.

Slaughter. Wholesale slaughter. Alina cared not for who stood in her way, reaping through the halls. It took a moment before the alarms finally went off. Finally alerted the group to what was happening. It didn't matter to her. She cleaved through armor and bone without a moments hesitation, leaving bloody scenes throughout the hallways as she went. Blood that she brought into herself. Streams of red, coursing through the air into the slots of her blackened armor.

Nourishment for her power and strength.

Character Bio
​
The disturbance in the force grew stronger and stronger as the warehouse became a slaughterhouse and the shedding of blood became a total bloodshed. It became enough that the Squire had to stop to center herself in the force, staving off the effects Bogan began to have by pulling on her soul. Opening eyes filled with pure determination burning inside them, Shani tossed her cloak over to the ground, pulling Maksayr from its sheath and breaking into a dead sprint through the door.

Feeling the flow of Ashla's warmth through the life surrounding her and within her, Shani channeled it into her empty left hand and rushed the assailant of these smugglers. Expecting a reflexive attack on her person, the Togruta pre-emptively placed her wakizashi in a block position as she concentrated the force into hardening her left hand, sending a force punch into the opponent's back, hoping to land a stunning blow. As soon as she recovered, she dropped into a defensive stance.

There was an odd sensation in the Force. Someone was here. Someone strong. She raised a brow, but it didn't stop her from getting thrown aside from a push of the Force. She spun, digging her blade into the floor to keep herself from soaring any farther than she did. Golden eyes focused in on the woman as she stood. Wrenched her blade from the ground. ".. No, not a Jedi, are you? Who are you?"

Character Bio
​
Raising her Wakizashi to a defensive position, Shani's Amber eyes narrowed at the woman. Standing face to face, she could now clearly feel the distortions that Bogan wrought on Ashla's life-force as it flowed around her, the eclipsing darkness of the woman's soul. This was thorougly infected by Bogan, given to its evil machinations. She would have to approach this very carefully. Backing up to prepare for either an assault or to launch another one of her own, She began to speak.

"I am Squire Tari, of the Sacred Blades, and I cannot allow you to continue the slaughter. I must ask you to surrender, or else withdraw."

"Squire? Sacred Blades?" She spoke aloud, humming in thought shortly after. Closed her eyes to really think on it. Her bloodied sword rested against the ground as she seemed woefully distracted. A feint for sure.

"You're one of those light cultists, aren't you? The Ashlan creeps. Ha. Alright. Tell me, squire, the hell are you doing here?"