Prisoner/initiate of the Elysium Empire 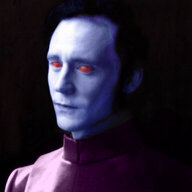 Character Bio
ION canons are typically a very controversial topic amongst us Star Wars fans. Particularly when it comes to how they interact with deflector shields. What is the general consensus here on CHAOS? Do they bypass shields? Does shielding stop them? Do shields amplify their effect by some means of deus exmachina line of thinking?

id like speculation, but a general consensus for how they work on chaos would help myself as a fleeter.
Assigned Ship Command

Character Bio
When I've used them, I've considered them to rapidly drain and disable shields, but not bypass them - and not disable anything else until the shields are down. As far as I can tell, that's in line with what they're supposed to do per Wookieepedia. From the wiki, emphasis mine:

"They were often used on capital ships, such as Star Destroyers, to facilitate the capture of enemy vessels or disable them to allow safe close-range fire. They also helped to drop shields prior to destroying enemy vessels."

"One type of ion cannon was the v-200 ion cannon, used to break through shielding and bring down heavily armored vehicles."

Of course, it's ultimately up to my fleeting opponents to determine the damage their ships are taking, including to shields.

Character Bio
As per above, that's been the norm everywhere I've seen ion cannons used.

Prisoner/initiate of the Elysium Empire

Character Bio
That helps. I just know that in legends and canon even that the rules for ION canons are always changing. A general consensus on how CHAOS views them helps me when making ship subs.
Assigned Ship Command