Character Bio
][ Aboard The Emulous ][

Well, the man was at a slight loss for words. Odd feeling, it was.

It wasn’t often that people came to him to ask questions.

In fact, that had never happened before.

But, he supposed, there is a first for everything. Either way, who was he to deny her knowledge which he ought to know if she felt so inclined to seek out help? Personally, he was all for personal growth in both knowledge and various other skills.

What intrigued him the most was that, in their communication, the topic that was to be discussed had not be elaborated upon. From this point of view, their meeting aboard The Emulous could be about any topic of either his or her choosing.

Kyrinov leaned back on the couch in the main area upstairs, relaxing into the red cushions as he waited on the woman to arrive and enter through the open hatch of the corvette.

It baffled him a bit. No one ever bothered to look for someone to just openly ask question after question to. He wondered briefly if the girl had some form of an alternative motive in seeking him specifically out for such a conversation.

He allowed his guard to drop for a split second, arm resting casually on the back of the sofa while the other rest on the hilt of the vibroswordhttps://pm1.narvii.com/6548/ff6b3b4401c53e039075d6eb659ecac843b1da77_hq.jpg in his lap. He glanced as the cockpit, where a pilot reclined in his seat, looking out among the stars and contemplating something within his own mind.

Yes, he had waited and he would wait as long as it took for her to arrive. He’d given her instructions on how to reach him and on where to find The Emulous. If she somehow could not follow simple directions, he had no purpose in even considering the questions she might pose to him. 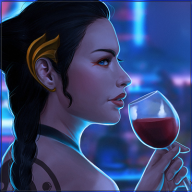 Character Bio
There were many others that qualified more so than the individual Nixia specifically sought out. She had many many chances to ask the core questions that ever seemed to float in her mind. Why now? A fog or mist the answer seemed to be even to Nixia herself. Perhaps the future conversation would reveal more. Slowing the young lady examined the hatch of the ship and began to descend as the instructions said.

The interior of the ship was rather lovely in design, something she took notice of instantly. " Fancy." Nixia commented taking a look around, afterward her gaze shifted to the man sitting on the red cushions upstairs. Not wanting to delay much further the Icarii joined him choosing to sit across from him. Adjusting her hair to the right side of head and breathing in she smiled at @Kyrinov.

" My name is Nixia Amabilia. Such pleasure to have someone as yourself willing to answer the questions I have.." The young lady paused glancing at the Vibrosword. " Are you planning on using that?" She asked softly leaning in couple inches. Her smile faded and orange eyes met his own with a confidence but also a hint curiosity similar to that of a little girls. This man in front of her held her attention.

Character Bio
He gave a small smile once he saw the young woman enter his humble abode that flew among the countless stars, a slight tug at his corner of his pale lips. He watched as she crossed the room and took a seat in a red chair across from him, this chair very similar in design to the sofa he sat in.

He sat up now, crossing his left leg over the over as he briefly examined the girl with a quick glance up and down her figure. All the while, listening to her speak of herself and her gratitude in regards to him allowing her to stop him and ask questions.

Nixia Amabilia. Quite a lovely name. He’d commit it to memory.

He nearly chuckled as her eyes shifted from him to Amnesia and she asked if he would use her in this meeting of theirs.

His grey eyes sparkled as he spoke.

“Hello, Nixia. I’m Kyrinov. The pleasure of this meeting is all mine, darling. And no, dear, I don’t plan on using Amnesia today. Would it make you more comfortable if I took her off of my waist?”

A rhetorical question followed by movement as he stood and placed the vibrosword on a table at the opposite side of the room, away from either of them.

He sat down once more, resuming his former pose and locking eyes with her own orange moonstones. “Would you like anything to drink before we begin our conversation? I’d hate to seem like an ungracious host to you.”

Character Bio
She watched the man move with a smooth sequence of movements. His body language spoke volumes to her. He could of been a Noble of sorts in another life perhaps, this was a man who held himself to an order of sorts or a code. Atleast that was her best assumption. " Hmm. Blue milk if you have any, If not Water will do fine. Thank you." She responded. Blue milk was an odd choice shes had been told in the past, but it was her favorite and there was no way she was not going to ask. It did make her happy to see [member="Kyrinov"] put his weapon away if only to make Nixia feel as if she had some illusion of control.

Kyrinov. His name was interesting and unique like himself. Her thoughts for a moment spun in her head. " An ungracious host?" Was such a thing possible? " I dont think such a things about you, whether you would of asked or not." She added. Growing up with Nobles she knew a good host from a bad one and so far this was most excellent. He was quite charming.

" Though I am curious. Your Vibrosword is named Amnesia?" Her head tilted some. In the past the Icarii had known some items or weapons to have names. Historically they all had a reputation in reguards to their actions. But a sword named Amnesia.

Character Bio
He nodded simply at her choice of beverage, making a simple "Come" gesture with two fingers. This gesture was aimed at the droid that stood next the the entrance to the cockpit. It moved itself over to them and paused next to the sofa Kyrinov perched himself on.

"Bring out a glass of Blue Milk and a Raava, if you will."

The droid beeped a few times in reply and left the room to prepare and bring them the drinks they'd ordered.

His eyes shifted back to her, smiling at her comment. It was nice to see that she believed that he wasn't being ungracious towards her. That was paramount to this little meeting. He needed her to feel welcome, even if it made him feel personally invaded upon and starkly uncomfortable.

Ah, his sword. Her name, at least. That was quite an interesting story. He sat up in his seat and crossed his legs, stomach muscles flexing and clenching to hold his weight straight up.

"Amnesia is named such for the fact that I sometimes use her in some experiments or...questionings that I hold. The trauma brought on by such an experience can loss memory loss, to some partial degree. It seems a fitting name for her after the two years we've been together. I also have a lightsaber named Dirge, but I prefer a sword over a lightsaber in most situations."

The droid came back into the seating area with their drinks on a platter. He grabbed them both and handed her the glass of Blue Milk and took a sip of the Raava before putting it down on the floor next to his foot.

"Now, I believe you have questions to ask me, Nixia," he said, prompting her to begin their discussion.

Gently her hand received the drink but she did not drink yet. The story of how the mans sword got its name fascinated her in more ways than one. Deep inside she didn't know wether to feel excited or replused slightly. She had yet to purposely torture another living being and at the moment could not picture herself doing so. " Ah I see... Very interesting." Briefly pausing she jestered to her left forearm which bore a metal bracer. Its dark metal appearance suggested Durasteel. It was her light-shield. " This is my light-shield. It does not have a name but It has served me well in combat-" She cut herself short and took a nervous sip of her Blue Milk. Why did she feel the need to compete? After blinking several times her visage returned to face the man [member="Kyrinov"].

His body language suggested he was ready to receive her questions. Shortly after he voice uttered the same. Apon hearing her name she began.

" Well... What exactly does it mean to be Sith?" She boldly asked. Both hands resting on the glass of Blue milk holding it steady in her clothed lap. There was more she wanted to say but she held back to first hear the respond that was going to be given. One step and a time.

One step at a time.. At least this is what she told herself.

Interesting choice of defense for an Acolyte. Perhaps he'd probe further into that later on in their conversation.

For now, he waited for her first question and it seems that he did not have to wait for long as she began the question as soon as he himself finished speaking. So, if only out of courtesy, he listened with intent.

"Well... What exactly does it mean to be Sith?"

Her question made it smile a little as he took another small sip of his drink before answering.

"Being Sith is defined by the nature of the first Sith Purebloods that once inhabited and ruled Korriban. Defined by our history and our Code. Today, however, our purpose and nature has not changed. We have... evolved, or rather, learned many things from our past. We have the capacity for constant change because it simply occurs all around us, whether it be by our own design or guided by another hand. If you're looking for my personal opinion, a person who holds the title of Sith should know and apply the wealth of knowledge available to them. They should follow our Code as it is meant to be followed; as a guideline. Like all Sith, there should be anger, hate, and fear present within their being. But, those emotions should never be allowed to take control of a person, rendering them nothing but a mindless savage, a slave. There is a certain balance when it comes to being Sith, one that few can hope to adhere to," he paused and met her eyes.

"But, my dear, I could ask you the same question. In your eyes, what is a Sith?"

He leaned forward and picked up his glass to take another sip before setting it on the table in front of them.


[member="Nixia Amabilia"]​
You must log in or register to reply here.