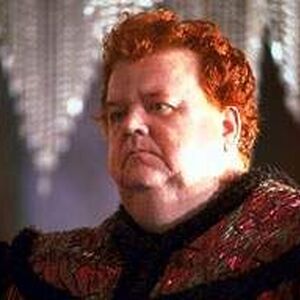 Brilliant Engineer: Able to solve complex mathematics quickly without a computer to aid him, and very good at working with technology.

Aging: Older than he used to be, Illyns is physically slow and often gets around via repulsorchair.

Morbidly Obese: Due to irregularities in his genetic code as well as tragedies during youth that left him physically frail and unable to exercise, Illyns is extremely overweight.

Born on Balmorran, Illyns was groomed nearly from birth to sit the head position at one of the Galaxy's most prestigious Arms Companies. It had changed hands many times over the last millennia, but his family remained heavily ingrained in its operations for generations. While they initially found great disdain for how it was handed off to an offworlder once he assumed the majority shares, Illyns came to embrace Alkor Centaris' hands off manner because it left everyday factory life to the people who knew it best.

They came to work closely together, with Alkor using his proclivity for wandering to close business deals for Phaygus, who was rendered largely immobile during his younger days.

Phaygus spent his best years studying all manner of mechanics, engineering, and honing his skills to be an operator himself; alas, fate dealt him a poor hand, and the man became largely confined to a management role. Having never reproduced, and with no likelihood of ever passing his family name on, Illyns treats Alkor like the son he never had.
Last edited: Feb 15, 2020

Since the company has a Factory sub, please hyperlink Balmorra Arms.

Once that's done you're ready to purge the Atreides and claim the spice.