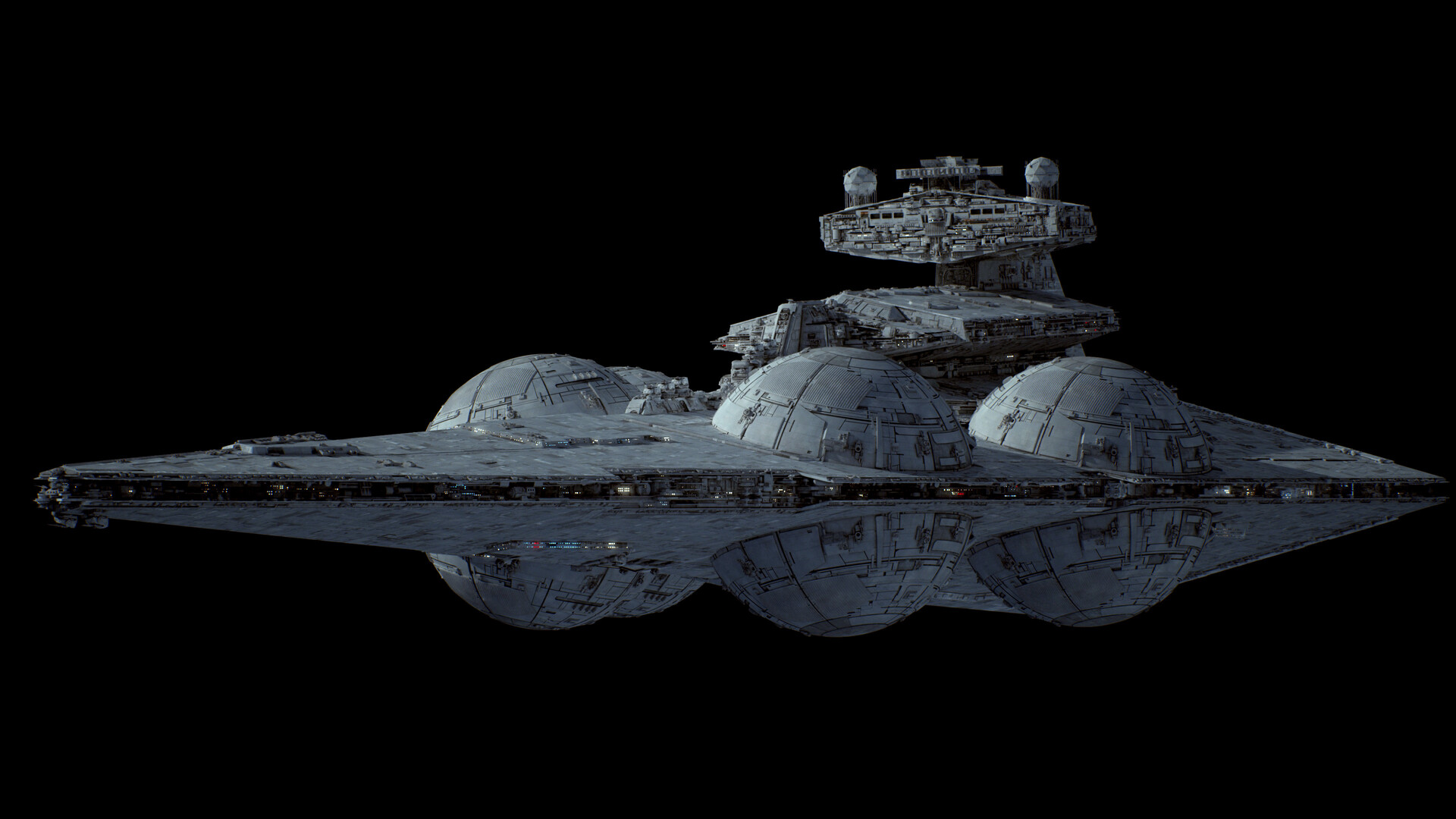 
After multiple rebel fleets were dealt severe blows by advanced Interdiction Drives, Jaeger realized that it wasn't touching on a market that could easily be a gold mine with the up and coming civil war between the Sith and Imperial Order. With this in mind, restricting an opponent to fight did wonders for stopping hit and run tactics; and often would allow the crippling of an entire fleet so long as they couldn't escape - and Jaeger knew that there was a certain market for such a thing.​
​
With the ability to restrict hyperspace, other space, and real space movement in and out of a system - the "Adrestia" is capable of taking any rebellious systems and holding them down until the cancer can be cut from the flesh of Order. In doing this, the Mass Interdiction Drive is the pinnacle of Interdiction technology - and the now most sought after technology for fleets looking for exactly that; a step above and beyond traditional Predator Interdiction. ​
​
All in all, the "Adrestia" is a monster of an Interdiction Drive, and has no equal on current economic markets; allowing Jaeger another chance at cornering the markets with high end, exceptional technology built for the discerning customer - and in this case, the discerning warlord looking to hold their empire together from malcontents, smugglers, and foreign powers. ​
​
Last edited: May 11, 2020

This is ready for judgement.

Darth Maliphant
Hi, I am Vis and I will be reviewing this submission. Wow! This is one very powerful piece of hardware you've managed to build!

We will be taking this section by section, if that's okay with you:

OUT OF CHARACTER INFORMATION
The OOC section looks fine, and I appreciate the hyperlinking. It makes for a much cleaner formatting and presentation.

PRODUCTION INFORMATION
This section is fine, save for the glaring lack of any materials, components, technology whatsoever being listed.

SPECIAL FEATURES
Okay, this is where the quicksand comes in. The item used as the "Primary Source" is a Vagaari Ship Net, which is in essence a ship-mounted retractable gravity well projector, which in and of itself is not at all an unknown quantity in Canon or here on Chaos. However, to begin with this projector being system or sector-wide interdiction capable is highly OP. The Vagaari, by definition in the link you've provided, likens its effects to that of a planetary magnitude.

The interdiction module you are constructing is under 10km (which is the largest ship possible in Chaos per site rules at this time), and the determination for the strength of a planet's gravitational power is a complex set of equations, which I won't go into too deeply here as they are largely irrelevant. What is relevant is that the relative size of the source of gravity and the distance away from that source are the two things which indicate the power of the field which this gravitational field can offer. Taking into account that the Wookieepedia article does claim the generator can produce a field roughly equal to that of a planet, and that the system must be carried of equal to or less than 10km, then we're forced to conclude that this would be approximately equal to a small sized planet. Because of this, as the field extends outward, intensity is greater nearer the source and drops as distance from the source increases, although the field may be pushed to a larger area. Therefore, the area of a sphere is figured as A = 4πr^2, and as the area of effect expands from this the inverse effect is applied to the power of this field, i.e. r^-2 . Thus, the entire option of system and (most certainly) sector-wide interdiction fields being possible from even the largest of these devices is simply not there. This just can't provide enough power to cover such a wide area, no matter how cool that would be.

Now, that said, it can provide mass hyperspace interdiction within a smaller area, let's say roughly this device can create a field equal to that of the planet Earth, this means a realistic reach for its interdiction effects would be <10-12,000km, or just about a little further from the center of the Earth to the moon. This is a much more reasonable reach than the one your submission proposes. I hope all the physics and math stuff didn't distract you, but the short answer here is: System or Sector-Wide Interdiction cannot be possible using an device based on Vagaari Ship Nets, even for those scaled up to be carried aboard an SSD. They CAN however cover a large portion of a system, realistically acting more or less as an additional planet within a particular system, roughly equal to about a radius of 12,000km from the source, on the uppermost side.

Pocket Dimensions are spaces that are too small or too easily accessible to be truly considered a separate dimension and are referred to as a small extra
pocket of space that is attached to our own.

So, while being beyond hyperspace and realspace, they are not truly a separate dimension, but rather a pocket attached to our own, and in the case of Otherspace, it is said to involve a number of black holes populating this pocket. In effect, black holes produce an enormous amount of gravity on their own, something which only the Charon species had been able to deftly navigate. Doing this, theoretically, would mean traversing narrow bands between these black holes' own powerful gravitational fields, something akin to navigating a labyrinth. What you're proposing then is that this device would prevent or slow that navigation by essentially throwing up gravitational field energy into the unaffected corridors of this labyrinth. As we have discussed already why the strength of this device cannot cover a whole system, and certainly not a whole sector, its ability to cause interdiction fields into even a small pocket of space becomes even less likely that it possesses such a reach.

Now, moving on to "Realspace Slowing", you cite this as becoming an effect upon activation. To slow realspace would require an even greater gravitational strength, which in turn would conceivably tear the ship carrying the device apart. Since in your submission you make no mention of how this device either effects the ship carrying it, nor the precautions and measures required safeguard it, we're forced to consider this as the only likely outcome involved. Let's revisit this in your next section.

In this section, you list that the Adrestia can overcome most HIMS and GAMS to enact "No Fly Zones" across entire sectors. For all the reasons stated above this is not possible, making this strength not merely unlikely but impossible. Now, as to slowing realspace ships to a crawl, again there is the matter of the effect on the ship(s) carrying this behemoth of a device. Turning it on would, as we touched on before, likely rip and rend that ship into a terrific mess almost immediately, and in the process destroy the device with it, thereby ending its effects in basically the same amount of time. Thus, this is a very OP'd device, and one which cannot do as you describe anywhere in this section, which entirely negates the whole of the strengths submitted here.

WEAKNESSES
Assuming your device wouldn't destroy the ship carrying and thus also itself, the sheer size and scale of this does indeed limit it to battlecruiser-sized or larger vessels. Again, anything less than SSD would have to be proportionately less in strength, so your viable area of effect would be further reduced as well. Ships carrying this device would have to be entirely dedicated vessels, moving at almost embarassingly low speeds and virtually without any maneuverability, as the effects of the reactors once engaged - if again they would somehow not destroy the ship and themselves - those ships would be the most 'locked down'. What I am saying is that - even if we presume no inherent damage to the ships or systems - the ship carrying this device would effectively become a stationary object (and also everything, person, and droid aboard) just sitting there in space in perpetuity. Unable to ever be shutdown because no one and nothing could affect the controls and you couldn't shoot it down as missiles coming near would simply stop once entering the gravity field. Either you wait for it to lose power (What's the lifespan of a nuclear reactor? 40 years, so assuming everyone on board wasn't dead, you have say, 40+ years before the thing runs out of gas before they could move again) or else you learn to live with the new landmark on the galactic map.

Finally, after an exhaustive read of Wookieepedia's articles on Interdiction Fields, Gravity Well Projectors, and Interdictors, I do not find examples of anything which can operate on the size, scale, or to the degree which you propose in this submission. HIMS and GAMS units cannot be entirely counted out, and certainly nothing which can lockdown an entire sector or even a system is found. The effects of the device - even one scaled down - have not been addressed, and must therefore suggest that none are taken. While ships have carried interdictors before, they have done so at much, much lower power and effect than this submission is based upon.

Do to these reasons, marking this submission as grossly overpowered, unlikely, and lacking any precedent or reasonable explanation of operation or effects, I feel I have no choice but to deny this submission. I regret I was unable to find any way to help you to make this submission viable, and I have much admiration for your work, so I know you will continue to make terrific submissions in the future. You may submit for a second chance per the factory rules at your discretion.