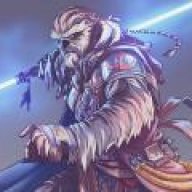 Strengths & Weaknesses​
​
​
(+) Physicality: Iakchi’s Wookiee lineage blessed him with greater strength and stamina than most species throughout the galaxy, something he uses to his advantage in combat with a lightsaber as he has the strength to put power into strikes that many Force users would need to utilize the Force to achieve.​
​
(+) Weapon Variability: Though his father wasn’t Force Sensitive, he was a great warrior with Wookiee traditional weapons, and aided Iakchi by training him with the bladestick and spiritblade. Iakchi utilizes this training though a double-bladed lightsaber or a single blade on the same elongated hilt.​
​
(+) Survival Skills: Jedi training aside, thanks to growing up in the temple on Kashyyk, Iakchi was trained in the classical Wookiee hunting and survival techniques, showing exceptional skill with a traditional bow rather than a bowcaster.​
​
(+/-) Mighty Glacier: Iakchi’s fighting style is very much one based on a mix of Form III and both sides of Form V, making him more of a defensive counter-attacking fighter than anything else, using his strength to throw off attackers while parrying to open them up for a counter-strike. While this leaves him vulnerable to more mobile and agile fighters who can open up various angles of attack, breaking through his defense is a tall order.​
​
(+/-) Pride: With a renowned warrior for a father, Iakchi hopes to live up to his example and be among the best fighters in the SJO. This eagerness to prove himself is both good and bad, however, as while Iakchi is a solid fighter, he doesn’t know when to pull back and quit or when not to engage an opponent far more powerful than himself.​
​
(-) Slow: Without the use of the Force to aid in movement, Iakchi’s movements are often slow and lumbering. While he makes up for this with skill in tight motion with a lightsaber to provide excellent defense, his other movements lack in speed and it isn’t hard for a smaller fighter to out-maneuver him.​
​
(-) Ranged Weapons: Archery aside, Iakchi abhors using blasters and slugthrowers, seeing such things as below the purview of a true warrior and disrespectful to the warrior’s ways. As such he is untrained in using them and if forced to will be horrible with it.​
​
(-) Flying: Iakchi is an absolutely terrible pilot, preferring to leave flying to droids or dedicated pilots. You’ll never see him in the cockpit of a fighter or a shuttle, and if he’s forced into one, it could end catastrophically.​


Biography​
​
​
Born to the Wookiees Ohlbi and Gremmayysh, Iakchi enjoyed a traditional Wookiee life for a time. It wasn’t long however before he was discovered to be force-sensitive, an incredible rarity amongst Wookiees. While he showed early aptitude for force powers, Iakchi’s true abilities began to shine when he crafted his own lightsaber, choosing a double-bladed saber to keep in line with his family’s traditional preference for the Wookiee bladestick as a weapon. His father, an excellent warrior, assisted Iakchi’s training where he could, further improving his capabilities with the weapon. ​
​
His sensitivity to the Force aided him in his Test of Ascension, a ritual allowed by the master he studied under, who sought to allow the Wookiee Jedi to keep a connection to his roots. He opted to not use these powers, however, seeing it as a form of cheating in an ancient tradition, something his prideful nature could not allow. This experience inflated that nature to a degree that his master disagreed with, though he continued to train the young Wookiee, now a fully-fledged adult.​
​
Shortly after Iakchi turned 19 he was administered his Trials, and after achieving success in them, was granted the rank of Knight. A young, prideful Jedi in his position, he now seeks to explore the Galaxy as a member of the Silver Jedi and improve his abilities to bring honor and respect to not only his family, but the Order as a whole.​
​