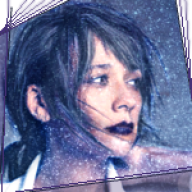 The Inquisition had a new initiate to enter into its folds. Her Shadow Superiors had called her in on the case, as her diligence and fluency in body language as communication was in order for the woman of whom Ahani was told had some form of being mute. The Echani lived lifetimes without speech, the way a shoulder moved, the intent of a look were sometimes all that was needed to the woman who was raised in a culture with little voice but the pungent sting of battle and spar.

So it was that Ahani came to the room in which Katar had been given, opening a side wall to the green laced refreshing patio outside with a button on her technological arm sleeve, which fit over the tight fitting high necked grey shirt she wore tucked into silver-grey cargo trousers folded into silver boots.

Ahani's silver eyes and hair were keenly groomed, hair pulled back from her face in a tight ponytail high atop her head. The Echani cocked her head to the side, shoulders low and bent her head with a nod, as if to say 'I am your superior, what state are you in?'

Katar was in a state of almost dead calmness. This place was so alive. She had never heard so many voices, smelled so many scents, or felt so many eyes watching her. As she heard someone come up behind her, Katar rose from her spot on the ground and turned to se who it was. It was a woman with silver har, and eyes to match. The woman nodded to her, as ifsaying hello, but spoke no words. Katar thought this most curious, as most people she met spoke at least a small word to her. She caught the woman's scent in the air. She didn't sense anything false about her. Katar tilted her head to the side, meeting the woman's eyes with her own.
@[member="Ahani Najwa"]

Character Bio
Ahani moved like an apex predator, claiming to domain under foot, yet cautious and aware of the happenings. She continued watching the shifts in @[member="Katar"]'s body as the pretty young thing moved and tilted, her green eyes shining in a way Ahani's never would, being vastly a monochromatic Echani.

She knelt down on her haunches, coming to look out at the wilderness beyond them as it to invite exploration. "So many new smells. Struck me, when I got here. Come with me. I will show you more."

Katar's eyes narrowed for a moment. Strangers were difficult to trust. Some were like open books, while others were perfect liars. Cautiously, Katar walked nearer to the woman, her eyes bright and alert. Her eyes darted to the woods. For a moment, she just stared at the green of it. So dense...... So living......... Her body tingled as she imagined running through it. The black soil beneath her bare feet. The breeze sending new scents into her nostrils at every twich of motion. Even now, Katar could feel it, see it, sense it. Then, she snapped back to the present.
@[member="Ahani Najwa"]

Character Bio
Ahani kept her body authoritative, yet open. The sort of behaviour many predatory species saw in their alpha females. She presented herself kindly toward this curious sentient, tilting her head in question as @[member="Katar"] sought the mercies and intricacies of the wild outside.

The Force in its glory opened up to the girl, and with it Ahani could sense the spirit in the curious silent maiden. Ahani grinned and hopped up on the patio railing, balancing with the poise of an acrobat on the ledge with both feet. She shrugged her shoulder for Katar to follow, knowing beyond anything that it was easier to follow one's animal nature and find that trust species intricately learned through action, and the run.

Run with me, Ahani seemed to express as she took off jumping from the second story to the ground and pouncing into a run on the path for Katar to follow.

Katar didn't hesitate to follow. With feline grace, she leaped over the railing, landing on her feet on the grass below. She ran with the woman, keeping a perfect pace with her. Together they sped through the dense wood. Every sense was heightened in Katar, catching the tiniest scents and sounds. The colors were vibrant and varied, blurring together as she passed them. In this moment, she felt some sort of wave move through her. It was like her human mind and her instincts were melting into each other to a point where there was no longer a distinction between them. She felt whole.
@[member="Ahani Najwa"]

Character Bio
The Force in this one was a worthy connection to be bolstered, and the Echani knew that sometimes one had to give more before they could receive any trust or obedience. Ahani didn't want to rule through fear. The powers of the Force would do this creature well, and Ahani knew how to get the animalistic girl to begin. Back on Munto Cudro, Ahani would run with her self-tamed Vornskyrs all the time. The canines ended up becoming pretty fast, but the Echani could take it farther with @[member="Katar"].

Pulling into the threads of her Force powers, Ahani began to run faster and faster, until the threshold of human endurance was passed and she was running through the Force at a speed no non-force-user could master. Her shoulders, her body language told Katar: Follow me.

Katar began to notice that the woman was speeding up, passing her. So it was going to be a race, was it? Katar delved deeper into her instincts. She allowed her mind to detach itself from the current situation, as she usually did in battle. She was all animal now. She leaned into her running, angling her head downward and using the claws on her toes for traction. As she pushed herself further, she began to feel something strange. It was a voice. No, many voices. They were far away, and to quiet to understand what they were saying. She could physically feel her footfalls becoming more spread out, like she was jumping more than running. What was happening to her? Was she flying? Was she losing her sanity? Katar didn't know. But, she did know that she was getting closer to the woman. So, instead of mulling over this new feeling, Katar concentrated on passing her.
@[member="Ahani Najwa"]

Character Bio
As @[member="Katar"] began to accelerate, Ahani kept increasing her speed to ensure the girl had no other recourse than to pull into the Force. Katar's mind seemed to burn with animalistic instinct, from what Ahani could glean from the top of it. Lifting from the run, Ahani took Katar deep into the Atrisian forest and pounced upward at a cliff face. Surging with her own connection with the Force, the instructor and Shadow Sword flew thirty six feet in the air to a small outcropping. The cliff was smooth. No hand holds, no places to cut in.

There was only one way up and Katar would need to trust in the Force. Ahani projected straight into the girl's mind. 'Feel the pull around you. Push it into your legs and jump.'

Katar watched, amazed, as the woman jumped all the way up a cliff. Even at her best, Katar could only jump about 20 feet upwards or forwards. This woman...... She was something else. Katar stopped running at the base of the cliff. She studied the rock for a moment, placing a hand on it. It was hard and smooth. The woman couldn't have grabbed anything on her way up. Katar was baffled. And then, a voice peirced into her mind, telling her to jump, too. She stumbled backward in surprise. How?........ She shook the creepy feeling out of her head. Maybe it was better if she didn't think about it. She flexed her leg muscles bendi9ng into position, she prepared to jump. She did as the voice had commanded her and used her senses. There was a pull. It was all around her. It was almost as if it was coming from her. If that were true, could she control it like the woman did? Katar didn't know. But she decided to try anyway. She squeezed her eyes shut, concentrating solely on the pull. There it was again. That feeling....... No, no, concentrate Katar, concentrate. She felt the pull coming from her like a pulse. Slowly, she pulled in bits and peices of that pulse. She took those peices and shoved them down, packing them into her legs like adding weight to a spring. Finally, Katar bent her legs, and jumped. She sailed through the air like she was a bird. She made it to the very edge of the top of the cliff before she fell. Grabbing the grass-covered rigde with her claws, Katar managed to pull herself up onto it. She was on the ground at the woman's feet now. Panting, Katar stood up.
@[member="Ahani Najwa"]