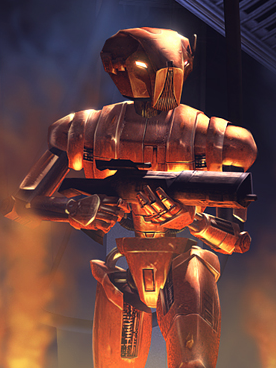 HK-40 displays several unique behavioral tendencies as a result of his programming. HK-40 has a definite sense of pride and considers himself to be superior to all organics and droids. The droid also has a peculiar and perverted idea of the concept of love, which he described as "making a shot to the knees of a target 120 kilometers away using an Aratech sniper rifle with a tri-light scope." He further mused that love was a matter of odds and found it odd that although most "meatbags" could not make such a shot, not many would derive a feeling of love from it. HK-40 has a unique speech trait and vocally prefixed every statement he made with a speech conditional that described the type of statement that it was. For example, if asking a question, he would first say "Query:" before beginning to speaking.
------------------------------------------
Abilities:
True to his design as an assassin droid, HK-40 is a dangerous opponent, able to fight effectively in a stealth operation as well as in open combat. His combat programming makes him a deadly combatant with a large variety of weapons, including blasters of any design as well as a multitude of droid weapons, such as flamethrowers and carbonite projectors. HK-40 has a particular affinity for blaster rifles, primarily using the Droid Assassin's rifle and often citing the satisfaction that he derived from using them in many combat scenarios.

As a Jedi hunter, HK-40 was knowledgeable in many techniques for assassinating Jedi, which he explained to Mela Tulik so that she could better defend herself against her enemies. When faced with a Jedi, HK-40 utilized various weapons specifically selected to be most effective against lightsaber techniques, such as grenades, sonic screamers, cluster rockets, plasma charges, poison gas, and mines, all of which exemplified the droid's versatility in combat. These weapons could not be deflected by a lightsaber, and sonic weapons were useful in shattering a Jedi's concentration, preventing one's use of Force powers. Mines and gas were useful in catching a Jedi by surprise, giving HK-40 the advantage in combat. HK-40 also mentioned using a sniper rifle to attack from long range in order to avoid detection. In addition to these weapons, HK-40 often attempted to erode the will of his opponents and make them doubt their beliefs, which he found to be an effective method for weakening their concentration and disrupting their connection to the Force. The droid also found attacking a Jedi's allies or Padawan to be a sound tactic, as Jedi would often sacrifice themselves to save an ally.

In addition to his combat proficiency, HK-40 possesses many other skills. Like many droids, HK-40 was experienced as a mechanic and had at least some knowledge in demolitions and slicing. During his journey with his previous owner, he could start a fighter simulation so that he could practice his skills at manning the turret of his ship. His prevoise owner also upgraded HK-40 on various occasions, increasing his overall efficiency. As much of his original programming was based on protocol subroutines, the droid is capable of acting as a translator, voice impersonator, and a protocol droid in many other respects. He is fluent in over 6,000 forms of communication, including Galactic Basic Standard, Tusken, Binary, and Jawa trade language.
-----------------------------------------------
Weapons:
Blaster Rifle
Droid Assassin Rifle
------------------------------------------
Ships:
Dynamic Class Freighter
------------------------------------------
HK-40 was developed by Darth Revan before the last battle of the Mandolorian Wars as a prototype for the Hunter Killer droid that would later go on to become HK-47 and was abandoned during the battle, left to be crushed into a million tiny little pieces when a Mandolorian found him. Seeing an opportunity for a untiring solider, so HK was taken under the mans wing. During this time HK learnt how to handle most weaponry.

One day there was a Mandolorian conquest on the planet of Tatooine that was doomed to fail and it did, but unfortunately HK somehow got deactivated and was inactive, a few hours after the battle he was discovered by a Jawa tribe and sold to one of the moisture farmers and was to be a simple translator droid.

That didn't last long and the farm was soon subject to a Sand person raid, he was assigned the position of security and did his job very well, until on day he accidentally traveled into the main city and climbed aboard a ship. Character Bio
I want one! Karkin Cira always gets the power toys

I have made my decision, live with it meatbag @[member="Ordo"]
You must log in or register to reply here.