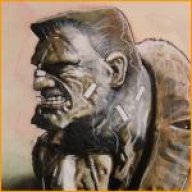 Coruscant
Near the Jedi Temple

For nineteen year old MacTavish, the indescribable waves of commotion and happening that pulsed across the planet were anything but ordinary. The towering city planet was almost the exact opposite of Glee Anselm, where they had roaring waves and deep caverns this place had waterfalls of decadence dressed up in tiny dresses walking the streets and mountains of steel replacing what was once likely very fertile land. Though the Nautolan Jedi hopeful understood the galactic importance of a central hub like Coruscant, he couldn’t help feel bad for all the potential lifeforms that will remain undiscovered, or that never had a chance to thrive.

It didn’t take him long to snap out of his little day dream, he knew the Jedi had no time to wait for someone to ponder what flowers might have bloomed had there never been these monuments to capitalism erected in their place. He knew little about the Jedi though, all he knew was that he had been given traditional brown robes when he left his planet by the Jedi Knight who discovered him, they were the same boring robes the Jedi Knight wore and they were the same boring robes that the group of masters who deemed Tav worthy of training wore. Though no matter how boring the matte coloring was, the robes were practical and functional, allowing the Jedi to maneuver their bodies while also providing some protection

The robes came in handy when hurried feet quickened their pace to catch up to where he would have been had he not stopped for lunch, or had he not stopped for a second lunch…so he likely was fifteen minutes behind, not uncommon for a nineteen year old in a big city for the first time. He knew where he was going, but the first day of class was always the most nerve wrecking. Had he not joined the Jedi, MacTavish would have been sent off to Coruscant to attend the university in a month or two anyways, so first day jitters on the biggest planet in the galaxy were unavoidable and thus he knew there was no turning back now, seeing as he’d rather be a Jedi than an in debt student any day.

The people MacTavish passed on the walkways dangling thousands of feet in the air were generally impressed with the speed in which he was hauling ass to the meeting room, even for a Nautolan Tavish was fast, he had reached speeds of nineteen miles per hour a few times, though he never felt the need to run that fast unless he was being chased or there was a surprise Red Hot Jawa Peppers concert. Pedestrians cleared the way for him as he catapulted through, he could tell he was getting closer to the temple when he noticed the boring brown robes paying attention to the padawan bolting through them.

It was a couple minutes later that he was inside the Jedi Temple, now he had to find his way to the giant meeting room across the way, though he saved enough time by running that he could afford to walk the rest of the way. He figured perhaps taking a nice stroll would lead him to his destiny faster than running would, considering it would happen either way, or maybe he started his first day with the wrong ideas about the Jedi…

Out of Character: Sorry if I did anything wrong, I'm still getting used to this XD
You must log in or register to reply here.
Share:
Share
Menu
Log in
Register
Install the app
Top