Character Bio
Ryloth was not a place Damien loved, but it was not a world he hated either. The nightbrother turned Mandragora would not complain about his lot ever. He could have been on Dathomir still the plaything of the witches, and being filled with the lies that he was some kind of savior and ruler. Being along the Confederacy had dispelled that notion quickly.

There was freedom in truth.

The night was cool, a gentle spring breeze rusteled through the trees. The scent on the air promised a shift to summer. This would be the last spring breeze for the season if Damien’s nose was right. It was a perfect night for a kill, a hunt, a game of sport.

His fur was black and his eyes red. The darkness of his lineage shown clear when he moved about as the wolf. It was Damien’s preferred state when he was among other people, and for his first few weeks among the Confederacy, his only state. For a while Katrine had been the only one to see his human form, and the markings which littered his body.

Damien caught the scent. He followed it to the beasts which made for good hunting. As he neared there was another scent on the air, a new scent.

A Lupine, a new Lupine.

Suddenly Damien felt an overwhelming sense of competitiveness. Another could steal his prey, and he was not going to let that happen. 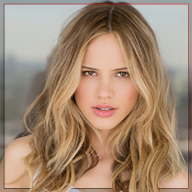 Character Bio
She loathed waiting for the weakest one. Every bone in her body reminded her of this as she made the attempt to wait and be patient. On Stewjon, it had made sense; they could not risk injury or be caught unawares by a third party while they hunted, and so they had always waited for the weakest prey to remain behind. But they were no longer on Stewjon now. She was no longer forced into submissiveness. She no longer bowed her head. She no longer had to hide the wolf that she was, and not the woman.

Alwine, the smallest wolf among her pack, crouched close to the ground as she looked at the animals. She would not go for the weakest one today. She didn't dare go for the strongest one, not yet. For that, she wanted at least one of her brothers with her. But she could take the second or third weakest one. She salivated as she imagined her jaw closing on its neck, ripping flesh and veins out, killing it quickly and then eating its meat.

And then the wind changed.

She caught the scent after the other Lupine had caught hers, and the tiny wolf became angry. She harbored no compassion or love for the one that had broken her pack, that had taken her brother away. By extension, the remaining Lupines were part of her pack. The pack to break packs. The pack of liars. The pack of homewreckers. A pack that she would try to remove from existence in the future.

And suddenly her prey had changed. She was no longer interested in the one that would feed her. Without thinking, Alwine darted from where she was, running on four towards where she knew the scent was coming from. She wasn't even trying to hide; her growling was as strong a she was, and the look in her dark eyes left very little room to question what she wanted to do.

Character Bio
The scent was getting stronger, which meant it was getting closer. Growling could be heard. Whoever this Lupine was, they were not hiding themselves at all. There was a deep seated anger, something Damien was not expecting. Why would a Lupine be angry toward another, especially one they had not met? It was the only thing he could assume because why else would the scent shift, come close and refuse to hide. It was a bold and brazen tactic, one which did not consider outcomes.

Damien knew his scent would give him away. There was nothing he could do to hide, and he was not going to harm another Lupine. He'd known about the culling, but still did not understand why his grandfather had thought it was necessary. They should not be trying to kill each other, especially when their numbers were so few.

What was worse, her movements scared off the beast he was hunting. The obvious presence had not just cost him his kill, but the entire herd. Now he was beginning to get upset. Friendly competition was one thing. Eliminating any chance at sport was another.

A low growl came from the depths of his throat. His paws dug into the ground ready to move, either to attack or defend. His red gaze kept a keen watch over where her scent was coming from. As if he could speak, he dared her to find him... in fact his mind invaded hers.

Character Bio
She was running at that point. Running as she never had on Stewjon; running free. The wind soared through her fur and she could taste the forest around her through the air. There was no hiding here. There would never be any hiding again.

But then came that... That attack.

Alwine stopped mid movement, changing from a blur in the wind to nearly a statue in less than a second. A whimper erupted from her as the violation entered her mind.

Regaining her senses, she was no longer idle. She lowered herself close to the ground, the drool of the wold coming out as she let a low and humming growl out. She was going to hunt all right.

She was going to hunt the Van-Derveld Lupine who was part of the bytch's pack.

Now she moved slowly, forward, stalking, sniffing him out. She would kill him and bring his fur back home, use it as a bathroom carpet.

There she was, in all the full glory of the angry wolf that yet managed to be only a little bigger than a cub. But she would never recommend anyone to underestimate her. Free of her Stewjon shackles, Alwine was going to kill.

Character Bio
Her scent was on the wind despite how quiet she sought to move. The silence, the fact she didn’t answer, it told him one thing, the Lupine he sensed was not friendly. He had to blend in. There was a stream, a body of water where his scent could be lost. Damien knew he could run to it if he needed, but he was also a Van-Derveld. If this one wanted a fight, then there would be a fight.

His mind pressed into hers again.

Character Bio
Again came that order. Alwine growled. The people outside of Stewjon had a horrible tendency to believe they had the right to invade her mind like that, to put thoughts in it that were theirs. Every single time it had happened, her mind had felt violated at the fact, trying to block the instance out. But she was untrained with the Force, and did not know how to do that. All that was left was to growl back.

A few more steps and she was in his view. Even in her wolf form, Alwine was as tiny of a wolf as she was a human. The adult proportions of the wolf were all there, but her size was barely bigger than that of a cub. And for all her tininess, the fierceness of the angry wolf could not be overlooked.

She growled again at the direction the other Lupine was in. She had no message to send into his head, would not have had one even if she had the ability. But for now, he was her enemy.

Character Bio
The wolf finally came into view. She was small. Damien canted his head looking at her stance. It was challenging, violent. Damien turned away from her. This was not worth his time or effort. He had no reason to fight this Lupine, and he was certain this Lupine had no real reason to fight him. This was not her territory any more than it was his. She was angry though, so Damien was still cautious as he began to move in another direction. It would likely anger the beast that he was not going to give her challenging position a response, despite his previous defensive posture. He knew that he should not underestimate the Lupine, but he was not going to give her the satisfaction of an undeserved or unreasonable confrontation either.

In the matter of time, he had lost the beast he was tracking, and with his nose to the air he picked up the scent again. Once he had it, Damien ran off. If the female followed him then that was her choice.

The run was something Damien enjoyed more than anything. Feeling the wind rushing through his fur was a delightful feeling, the best he could imagine. There was a freedom in what he was doing, but this time it felt empty. His mind was on the other wolf, and knowing he had to keep her whereabouts in constant check. It was ruining the hunt, but Damien was not going to let her presence rob him of his kill. If she was looking for a fight she was going to have provoke him further.

The pack of Rycrit were nearing their watering stop. Damien knew he would have to slow down, and he did so, taking a position within the thickets which surrounded the water. He looked for the other Lupine in the process... He was vulnerable for attack if she had kept up with him, and he was almost certain she had.

[member="Alwine Lechner"]
You must log in or register to reply here.

The Steal of a Lifetime!

To Steal From The Shadows