Character Bio
Anger. Betrayal. Hopelessness. A thousand emotions flooded through Sadrion's mind as he stood on the edge of the capital planet of Dromund Kaas. The dark, cloaked figure looked around tensely, as I someone would attack him from the shadows at any given second. His golden eyes full of fury, he gripped the lightsaber of his father in one hand. No, not his father. Xardus Folidaar was dead. The Darth had no family. No happiness, love, or compassion. Every horrible thing he had ever done was crammed into his head, a constant torturing reminder of his past. The only difference? He accepted it now. It was a part of him. Slowly scanning the city, the dark man began to walk past the outskirts and into the marching waves of imperials, Sith, and citizens alike. Some would give him looks, but the smart ones steered clear. They could see the utter insanity in his eyes, and had no intention of getting in his way. Good. 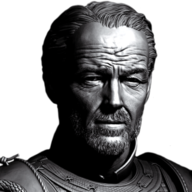 Character Bio
Setting foot back on Dromund Kaas enraged the Ashborn greatly. The site of his creation, escape, which resulted in his recapturing, spending years of being locked up deep within the vaults of the Sith, until finally freed and subjugated by his current master. People would often times regard their place of birth as a fond memory, something sacred to them. The Ashborn did not; it was a planet full of filth and degenerates, always raining and always dark and dank. It was not suitable for a man made of fire, only this time he was wearing his protective armour, eliminating some of his disgust, but not by a whole lot. Everywhere he turned there were people walking by, without even a hint of knowledge of the great machinations of the Empire or the Sith as a whole. They were sheep; thieves, smugglers, bounty hunters and mercenaries. None of them with any higher purpose in life, only thinking of themselves first and foremost. They could not speak the word 'loyalty' becuse they have never heard of it. Coin was their only loyalty, credits their only fealty. Disgusting creatures, only worthy of vaporisation or disintegration. They were ants to be squashed underneath his boot. Worthless. This whole planet was worthless.

Moving through the bazaar the Ashborn found himself in a less crowded area, much more to his liking. There was a lone, dark figure standing off to the side, overlooking the sheep herding themselves along the street. By looks of it, the man seemed to be of ill health, with gleaming yellow eyes being the only other colour than the pale white of his skin. Thyrian immidietly noticed him being a man of damaged psyche, not unlike himself from time-to-time, with the incoherent rambling and twitchy behaviour evident should people just stop and notice the man. While his master was in talks with the Emperor himself, the Ashborn had little else to do with his time awaiting her return, and so he stepped towards the sickly-looking man. As he got closer he sensed the man was Sith, and a glimpse of his lightsaber was given. Bowing his head towards the man, he introduced himself with his usual booming voice. "MY LORD, I HOPE YOU DO NOT THINK ME RUDE TO QUESTION WHETHER YOU ARE FEELING WELL OR NOT?"

Character Bio
Sadrion's reaction was a quick one. Lashing on the new arrival, he grabbed his throat and squeezed hard. What do you want, weakling? You have no business talking to me!" Anger and fear filled his voice. Inside himself, Xardus watched his actions helplessly as the darkness controlled him. He had nothing to do but shrink back if he tried to fight it. The fear in the Sith's eyes belonged to the former, not the current user of the body. While he grasped the man's throat, he immersed himself in the dark side, lashing himself out at anything nearby.

Character Bio
As the strange man clad in black robes grabbed hold of him, the Ashborn's temper flared. This Sith was clearly out of his mind, with little regards to whom he attacked. Luckily for Thyrian, he did not breathe nor did he feel physical pain, and so the assault on his person was only a minor inconveniance. Gripping the hand that attempted to choke him he forced it out of its grip, before shoving the seemingly frail man away from him. Furious at the man's reaction, he scolded him there and then. "GET AWAY FROM ME, SITHLING! I HAVE DONE NOTHING TO YOU, AND YET YOU ATTACK ME IN THE MIDDLE OF THE STREET?" Not wanting to cause more of a scene than had already been created, he took a few deep breaths to quench his desire to unleash his rage upon those around him, inluding his attacker. His every action reflected upon his master, after all, and she would not have him instigate inward fighting on the streets of the Imperial capital city. "YOU SHAME OUR ORDER, SITH. MORESO YOU SHAME YOURSELF IN THE FACE OF THESE PEOPLE." His yellow eyes pierced those of the stranger with a menacing stare.

Character Bio
Sadrion glared at the man who stood before him. "I am no Sith. I do not bind myself to a specific way of teaching, do you understand? You don't wan't to be near me." His glowing eyes bored into anyone who would dare look. The Sith was right, however. It wasn't smart to create a scene in the middle of the plaza. Turning his foot in the other direction, he walked to a secluded spot, and seemed to motion the other to follow him.

Character Bio
Able to compose himself, the Ashborn took a few deep breaths to suppress his built-up rage. This man had attacked him, and he had no reason to trust him, least of all on a rock like Dromund Kaas. Yet he chose to follow him; perhaps the man wished to settle their dispute by strength of arms in a more secluded area. His behaviour suggested otherwise, however, as once out-of-sight for the large crowds wandering the streets, he gestured for Thyrian to come closer than was traditional and necessary to enact lightsaber combat. This man had something else in mind.