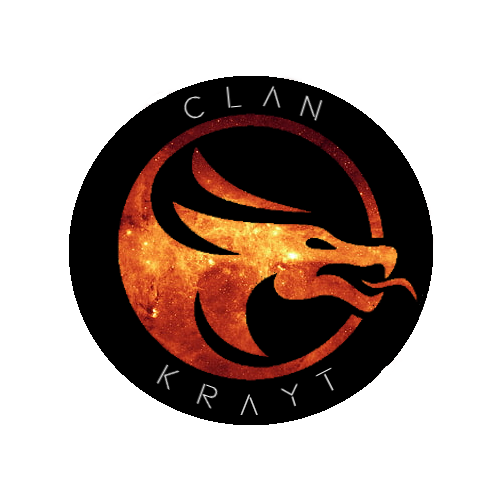 HISTORICAL INFORMATION
Clan Krayt was founded by Jaron Ozel, a former foundling and ex-member of Clan Ozel, who started his journey after being taken in by a Mandalorian who found the young man in a fighting ring in Mos Eisley after escaping an attack from a Canyon Krayt Dragon which decimated his remote mining village. The Mandalorian observed the man over a number of days, noting his passion and potential. After striking up a conversation, the Mandalorian introduced Jaron to a world beyond his small village on Tatooine and offered him a place in their clan.

Jaron thrived in the clan and adopted the ways of the Mandalorians as his own, soon becoming accepted by his peers. However, the open policy of the clan also proved to be its downfall. Not being selective with who joined the clan aside from having members show loyalty and commitment to the clan and lifestyle meant they freely allowed Force Users to join with no limitations but this proved to be a fatal error as many of the Force Using members succumbed to the Dark Side without proper guidance and put their own interests above that of the clan, even going as far as betraying members for their own sake, resulting in a civil war which left the clan scattered.

While escaping the conflict, Jaron returned to his home planet of Tatooine three decades later to challenge the Krayt Dragon which had taken his former life from him and upon successful completion of his mission he felt he no longer had a place in the galaxy after both former lives had resulted in failure so he sought to create his own clan, Clan Krayt, and base it off the similar acceptance that had allowed him his place among the Mandalorians, though with a healthy distrust of Force Users, and so he returned to Mos Eisley to continue the cycle.

In modern days, the clan is expansive and spans across many systems with not all members known to each other as any member has the power to recruit who they see fit. The wariness of Force Users is still evident in the clan as despite the vast number of members, the number of Force Sensitives dwindle. Though they are not forbidden nor discouraged from joining, they are warned that they need to give up their right to actively use the Force in order to be a member of the clan in the hope that it'll decrease the likelihood of falling to the Dark Side, though different Alors have different views on the severity of having Force Sensitives among their ranks so the rules fluctuate through the years.
Last edited: Nov 24, 2020

Under Image Credit you have this: Template Credit

Unfortunately that link is a direct link to the image itself and not the site where you found it. I will need the actual site for that one as well. If you have ha hard time finding it let me know and I'll try and help you out!