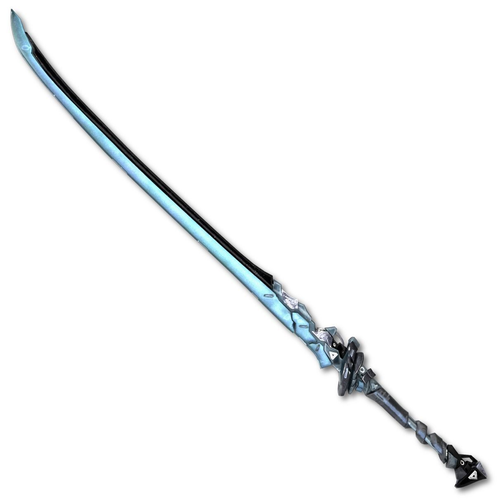 Intent: A personal weapon for Alkor, utilizing Ultrachrome to create a wicked weapon.

Modularity: Limited: parts that have been damaged or eroded by weathering can be replaced.

Blade filters Nitrogen from the atomsphere and directs it through compressed air at subzero temperatures, causing it to transition from gas to liquid state. The liquid Nitrogen is then vaporized as it passes over the blade edge and rapidly cools it.

Due to the Superconductive nature of Ultrachrome, while it is kept at extreme low temperature, it emits an Electromagetic field across its surface.

Plasma is uniformly conducted across the resulting field, preventing concentrated contact with the Ultrachrome and allowing for it to parry lightsabers.

The extreme cold temperature of the edge causes tissue death and nerve damage on contact with most sentient beings. There may be exceptions pending physiology.

Specialized sheath can contain blade at any temperature, and may divert accumulated energy to armor power supplies.

+ Resistant to Lightsabers, to a point: While the Electromagetic field is active, plasma will be conducted along the surface of the blade and distributed safely away from the Ultrachrome. This process allows for the weapon to block blows from the Jedi weapon, but beware should the power fail...

+ Frostbite: Strikes from the blade are so wickedly cold, even though slightest touch is enough to severely damage the outer layer of skin, kill tissue, and even deaden nerves. It is extremely effective at neutralizing enemy personnel. Given repeated blows, it can even hamper electronics that are not protected again extreme cold.

+ Failsafe: designed with the worst in mind, the specialized sheath allows for the wielder to safely stow the chilled blade when not in combat, or when it is rendered non-functional. While in the latter state it cannot be utilized for combat effectively, the energy stored in the capacitors can be cannibalized by the user's armor to restore expended energy stores, or as an auxiliary power source in a pinch. (For this function, the sheath must be actively worn and jacked into the armor.)

- What are you, a Jedi?: Despite the nature of Ultrachrome allowing it to reflect lasers and blaster fire, without Force enhanced reflexes and a weightless blade made of literal plasma, the wielder isn't going to be stamping any packages of that variety with "return to sender."

- Cold Snap: handling the blade is just as dangerous to the wielder as to the victim. Direct contact with the blade while it is at subzero will cause tissue and nerve damage indiscriminately.

- Critical Mass: while built to withstand intense electrical currents by way of the breaker circuitry, reaching peak levels will cause the blade to switch offline as a means of protecting the end user. During this downtime, the filtration and cooling systems cease their functions and the blade rapidly warms. This causes it to lose its electromagetic field, making it useless for deflecting lightsaber strikes.

-The Spirit is Strong, but the Body is Frail: While the EM field is offline, Ultrachrome is susceptible to direct contact from a lightsaber. Blows to the weapon in this way can warp, melt, and even render the weapon unusable entirely.

When a Smith begins the process of forging a weapon, they envision the end result in their mind and work toward giving it form. As he considered the lightsabers he used in the past, Alkor was reminded of the primal heat that radiated from them. It raged so hot that a mere touch could both rend limb from body and instantly close the wound.

The weapon had lethality, but it symbolized fire, warmth, and life. Jedi and Sith alike revered the blades, but the blades were anything but what Alkor wanted to emulate when creating a weapon that suited the Resol'nare.

Instead of warmth, Alkor decided to utilize a concept from Mandalorian mythology- the god, Arasuum, who governed stagnation and represented the ideals of peace, sluggishness, and laziness was far better suited as a fate for aruteiise.

Utilizing some of the brightest minds available to him, Alkor schemed to find a metal that would suit his purposes. As a superconductor, Ultrachrome taken to extremely low temperatures would create an Electromagnetic field around its surface area, while simultaneously performing the grim task that the man had in mind.

Constructing a prohibitively expensive prototype system, Alkor was able to successfully filter Nitrogen from the atmosphere through compressed air, shifting it from gas to liquid state. Once this system was functional, he set to work on translating the technology into a sword.

The liquid nitrogen that the blade converted quickly vaporized as it was reintroduced to normal atmosphere, rapidly cooling the Ultrachrome as it passed along the edge. This allowed the metal to maintain the Electromagetic field while causing the blade to be hellishly cold to the touch.

Strikes from the weapon were hideous, causing tissue and nerve damage from the severe cold, and prolonged exposure could even cause actual freezing. This worked to a lesser degree in mechanical devices not protected against the elements, causing disruptive frost to build up along them and even causing them to short until they were thawed.

Dubbed Ciryc'kar'ta, or Coldheart, the blade added a very dangerous weapon to the Deathwalker's arsenal.

Although I have no idea if the science behind this works at all, I believe the strengths and weaknesses create an effective balance.

Character Bio
Submission Archived per [member="Alkor Centaris"] as it was re-submitted here.