Gherron couldn't help it. He wanted-no, he needed- food. There was no question about it. So naturally, what did he do? He walked to the nearest food bar and ordered a huge foot-long sub. Jedi business was important after all, but so was managing his stomach. "Mmmm. Oh, that's good." Unfortunately for the young man, he was only half-way into the sandwich when his holocom chirped. Groaning, he swallowed his food and answered it.

"Knight Vael, you are needed in lower sector. Some kind of beast running loose."

Sighing, he acknowledged the command and paid for his food. He was taking it along with him, of course. There was no way he was letting such a masterpiece go to waste. 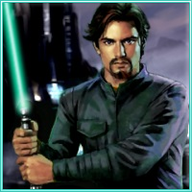 Character Bio
[member="Gherron Vael"]
Business in Coruscant... not that frequent anymore since he was no longer attending Jedi business like it was expected from him... now he had to attend to other business that were as important as the Jedi Order's business.

Today, he had to walk a bit throughout the lower areas of the massive city in order to achieve his goal today; a goal that was definetely hidden from those in view... however, they would definetely notice that he was wearing robes, dark brown robes... anyone would mistaken him for a Jedi... and technically he was.

The corellian walked with haste, his mission was short and to the point; he had to check on a beast and provide as much information about it as possible... reports indicated that it might be a darkside entity... and although Vex suspected that the Order would be sending a Jedi, he had to make sure that the job was completed.

"Might be ackward..." thought while he scratched his beard for a bit, he was sure he would be caught and questions would be asked "...but it was to be expected" said to himself while he walked straight to the lower levels.

Today, he didn't even bothered in concealing his Force signature nor his visual presence... he knew that he was in a safe planet and for that reason, he even thought that it would be a nice idea to show up with his Jedi attire.
"Wounds do not heal by ignoring them"

Character Bio
By the time he reached the outskirts of lower Coruscant, Gherron had only a bite left of his sandwich, and was now satisfied. Unfortunately for him, a small womp rat had leaped up and grabbed the piece right as he was about to finish it off. "Hey! That's mine!" The rat paid him no mind, instead scurrying off. A sound came from the creature, and he could swear it was laughing. "Oh, you little...." He took off after the pest in a flash, dodging and weaving through a few pedestrians as he did so. "Get back here with my food!" He was close. Just as he just about wrapped his fingers around the little mongrel, he smacked head-first into an older man, nearly knocking him down. 'Great. Perfect example to set as a Jedi, idiot',he thought to himself. Looking back up at the man, he gave an awkward smile. "Umm.... Hi? You okay sir?"

Conflict theme|Main theme|Passive theme​
Gear
You must log in or register to reply here.