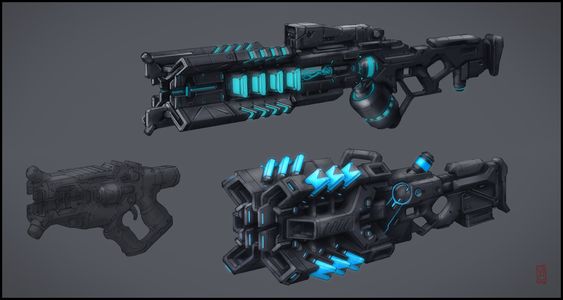 PRODUCTION INFORMATION
TECHNICAL SPECIFICATIONS
SPECIAL FEATURES
Strengths:
Weaknesses:
DESCRIPTION:
​The weapon itself is an upgrade upon a previous design, which was held-back by its use of human troopers. Now, under the use of strictly Dravalan Warriors, the weapon is allowed to evolve to its truest potential. It mirrors the savagery of the brutes who use them. It excels in close quarters combat, like their armour; being able to be utilized against multiple opponents and mow down infantry.

However, the weapon is practically useless at long range, whilst the weapon does have a single shot option; this is more so in use for executions and use against civilians rather than in actual combat.

As far as I can tell this is basically a light machine gun with a grenade launcher. That's not really troubling.


Just you know...don't go crazy with it.