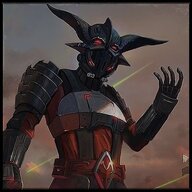 
APPEARANCE:
Braan has short brown hair that he tries to keep down, though it naturally spikes on its own. He has light green eyes that darken occasionally, though this depends highly on the world he is on at the time. He is built broadly across the chest, with two massive scars running across it, starting just above his right hip to below his left shoulder. Sprouting out from these scars are dozens of tattoos, each one inspired by a planet he has visited. Each one is different, and yet flows smoothly into the pattern working across his body. Much of his chest and left art are taken up by these tattoos. He wears orange and yellow war paint on his face, with designs that change depending on what he plans to do that day.


BIOGRAPHY:
Braan was born on The Wheel, a massive space station controlled by the mining guilds in the Outer Rim. His parents were both indebted slaves to the mining guilds, and so to help pay off their burden, they sold their newborn son to the guilds. Raised among children in a similar situation as himself, Braan quickly emerged as a brute among his peers. Despite his harsh language and boasting, other children flocked around him. Even back then his sense of honor was evident, as he protected those he saw in need with a vicious fury. Many of the older slaves knew not to come near Braan or his little pack. Seeing an issue, and not wanting to lose such a skilled worker, the overseers had Braan transferred from the mines to the freighter fleet of the mining guilds.​
​
For the next decade, Braan served aboard numerous vessels, learning much about the inner workings of starships, how best to fix them, and even to fly them. he quickly became one of the best pilots in the mining guild fleet, and was eventually promoted to Captain of a vessel at the age of twenty. On his first mission, he was ordered to transfer a new batch of slaves to one of the guilds mining stations in the Mid Rim, a task Braan despised, yet followed at the time. On the way to their destination, the freighter was attacked by Mandalorian warriors of Clan Australis, eager to free the slaves. Despite his best efforts, Braan's freighter was shot down over a small habitable moon, crashing lightly into an empty field. Mandalorian warriors stormed the freighter, though Braan was able to defeat several of them in hand to hand combat before he was eventually brought down by a stun shot. Impressed by his ferocity and combat skills, and seeing the mark of slavery on his neck, they offered him a chance to take his own freedom. Seeing little other way of escaping the moon, Braan accepted.​
​
He would go on to join the Clans 11th regiment, specializing in boarding actions against starships. After nearly a decade of service, Braan departed Clan Australis, seeking to establish himself in the greater galaxy. ​
SHIP:
N/A