Black Horse and a Cherry Tree

It'd been several days since he'd hunted down @[member="Eryn Xaltyr"] to run tests on his blood, find out the source of the things which ailed him. The bloodwork was still inconclusive, but he knew at least that he wasn't contagious - a bonus if he'd ever heard of one. Although, she'd had to have known that before the work went in.

Brow furrowing at that peculiar thought, he shook his head and adjusted the course of the ship towards the surface of the Mandalorian homeworld.

Beskar. Mandalorian Iron. A fabled metal; one the lightest in existence, expensive and hard to forge with a rarity that'd make even a Hutt think twice about purchasing it in any large quantity. It was found only in two locations; the planet below, and its moon. He'd preferred Mandalore, though, as it was a world he'd put on his bucket list of places to visit.

"Where's the mine again?", he asks, turning towards the woman he'd dragged along against her will and without her consent. Maybe he was kidding. Maybe he wasn't.

Regardless, he needed to know so he could land nearby. He'd told @[member="Jorus Merrill"] to meet him on planet, although he'd not really informed him of why. In truth, he just wanted to visit his old friend, see what he'd been up to. Hell, all he knew was that Jorus had been hunting Daxton - he knew nothing else of the man he'd once called friend.

Character Bio
@[member="Sarge Potteiger"] would find Jorus's signal pretty easily. For once, the Gypsymoth wasn't flying under the radar. Jorus had made enough enemies that irking Mandos wasn't on the list. Not today, and not with CIS breathing down his neck. He'd moved the portion of Silk Holdings on Ukio out to Drogheda, long before Roon was on the list.

The YV-929 had put down on the outskirts of Keldabe, not far from the edges of the radiation area that had turned the plain to glass. Rach Kol-Rekali had died there, unlamented, and Jorus couldn't help a bit of satisfaction that peeked through his awareness of the atrocity. Rach had needed to die, more than any man he'd known. Except maybe Daxton Bane. Most other villains of his acquaintance deserved justice, but some men aggressively pursued further crimes more than others.

He tossed his baseball and waited for Sarge.

Blinking as his ship registered Jorus' code, and with no response from his erstwhile captive, Sarge manuevered his way through the Mandalorian fleets, heading for Keldabe and his old friend. Watching as he descended through the atmosphere, he came in low and slow towards where Jorus was to be waiting.

It had been some time since he'd flown the Hotel, and Jorus hadn't seen it in Stars knew how long. Easing the ancient YT-1300 to a landing on the plains, he was treated to the sight of what had to have been a nuclear device going off some distance away. Standing and tossing his headset aside, he lowers the exit ramp and heads outside, more than a little happy to be breathing completely fresh air instead of the recycled stuff you got aboard starships.

And the ship wasn't the only curiosity Jorus would find today. Sarge still hadn't found out what was wrong with him, and he'd kept his face entirely covered during the debacle with Daxton. Coming down the ramp in a long sleeved plaid button-down and a faded pair of jeans, Sarge was a far cry from the mercenary figure he usually cut.

Except, of course, for his shockball cap and sunglasses, glowing as they always did with blue scrawls of information. "JORUS.", he barks, grinning ear to ear. "We don't need to shoot anyone do we?" 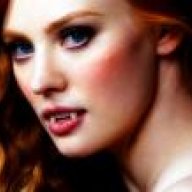 To say she was livid was an understatement as the young Garhoon remained silent behind her would be captor, a petulant look upon her face. Despite her natural strength, enhanced senses, and speed she couldn't go up against Sarge as he was now a far cry from the human he had been. To top it all off, he didn't exist in the Force so she couldn't even use her minimal training against him. Eryn Xaltyr was beyond enraged and she could only assume that her Master was somewhere in the shadows laughing at her predicament.

Cold eyes watched the man move by her, but she remained seated for a long moment. Finally, with a deep growl rumbling low in her chest, she rose from her seat and followed after. Dressed in a simple sundress of soft white material with a yellow floral pattern, she exited the ship behind Sarge. Her appearance bellied how deadly she truly was, but as her eyes fell upon the man named Jorus she knew it didn't matter. The man was far more powerful than her and likely knew exactly what she was despite how she was hiding her true nature. Deciding to forgo playing any games she let the mask she'd had over her presence to slip away, a slight nod of her head the only greeting she offered the man.

Character Bio
@[member="Eryn Xaltyr"] was guilty of the second greatest tactical flaw: Overestimation. Jorus had essentially zero sensory abilities in the Force, basically no Force powers whatsoever. All he saw was a hot girl with an edge, and thought happily of Alna for a moment.

No, Jorus's Force skillset on solid ground basically boiled down to hand-to-hand and good instincts. All his gut showed him was, well, a hot girl with an edge. Insofar as Sarge had a type...

"If we're shootin' things, I'll start with those glasses, bro," said the Lord of the Hyperlanes. He'd left his shell gun aboard, and kept only the Czerka in its hip holster. "Who's your..."

He trailed off eloquently.

Character Bio
Sarge smiled, although the answer he gave back probably wouldn't be what Jorus had expected. "Doctor, actually.", he says, completely honest. It wasn't out of the question that there was more, and Jorus would likely assume there was, but Eryn was his doctor. Although that still didn't explain why he'd dragged her along.

"And she knows where the mine is. Beskar mine." Walking over to Jorus, he gave the man a hug for literally no reason.

A field trip to the Mandalorian homeworld was not what she had wanted, but Sarge had been rather persuasive. Calming a bit she flashed Jorus a smile that easily revealed her fangs. She held her hands up as if to say she was guilty as charged, moving a bit closer to the embracing men. "Just call me Eryn." She held a hand out for Jorus to take once he was free of Sarge's embrace. In a matter of seconds her demeanor had shifted entirely and for the moment she seemed as harmless as a kitten.

There wasn't much to be done but return the brohug and the handshake, in that order. "Not gonna lie, I've always had a thing for beskar." The shell gun he'd left aboard was a Mandalorian antique, mastercraft, veteran of duels against lightsabres and exploding capital ship reactor cores. "Everyone's all up in the ultrachrome and the songsteel and cortosis alloys and whateverthefeth. Gimme some beskar, some cortosis ore, and that's about all you'd need to ruin the Jedi Council's day.

"So where's this mine, Pointy?"

Her brows raised in question, but she said nothing to indicate she was annoyed with her newest nickname. Sighing she looked to the west and pointed toward an outcropping of rugged looking hills that would likely be mountains thousands of years down the road. "There." Shooting Sarge a look she flashed Jorus another smile, though it didn't reach her eyes.

"I guess the question, then, is do we walk or do we fly? I'd rather not stick around too long if it's at all possible." Something told him he'd be underground before long, and with all likelihood, the Mandalorians would have him do something immensely stupid to prove he was worthy of their ore.

Hopefully, he'd not have to go on some ridiculous hunt for some strange shadow beast that no one had seen in decades. He doubted it would come to that, though.
You must log in or register to reply here.
Share:
Share
Menu
Log in
Register
Install the app
Top