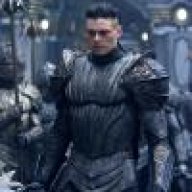 Intent: To facilitate further power of the Sith Empire, specifically Lord Depravious
Development Thread: (Not mandatory on creation, but helps give insight to a submission and shows effort. If not included, depending on the submission, a development thread might be asked for before final judgement)
Manufacturer: Mon Calamari Ship Yards, Kuat Industries.
Model: Super Star Destroyer Model
Affiliation: The Sith Empire, Lord Depravious.
Modularity: Has the capacity to be Modified.
Production: Minor, such a large ship and large production cost that only few are able to be made. Lord Depravious's will be the first.
Material: Durasteel, Metal Alloys.
Description: The strength to this massive vessel is obviously its size, along with it's massive fire-power capabilities. With the Superlaser upon it, and the massive amounts of turbolasers it can take down nearly any Star Destroyer in the galaxy in the blink of an eye. This planet destroyer has the ability after hours of battering planets with its Axial Laser to destroy them. It's size however is also a major flaw, it can be out manuevered by smaller star ships, making the lead of said ship have to usually have multiple plans should it be flanked by a number of ships. It's sole purpose is to strike fear into those who would dare defy the Sith Empire, and under the commission of Lord Depravious it will do as such

Please scale your vessel down to 2KM long and it's armaments and what all it's carrying and then we will begin to talk further edits from there.

Character Bio
Denied due to not conforming to the sites rules and none of the edits were made.