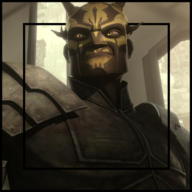 STRENGTHS AND WEAKNESSES (Required: 2 Weaknesses Minimum) :
+ physically fit from martial arts training
+ purpose driven
+/- emotional
- aggressive, sometimes to his own endangerment
- living a double life... the stress is tremendous to remember the lies
+ believes in sacrificing for the greater plan
+ understands he is not the master planner, nor will he ever be
- lacks ranged weaponry training
+ decent pilot
SHIP: YJX-1200 Heavy Freighter

BIOGRAPHY:
Arthos simply doesn't know much of his early childhood other then that his father and brother left one day and never returned. From then on he was raised by the community as some type of crippling illness ate away at his mother's mind. This created greater communal loyalty for the people of Iridonia as a whole in him. He believed heartily in the ideas of Iridonia dominance and that once more it should be colonizing the worlds around it.

He entered the political scene fairly young, pushed by the realization that if the government didn't act soon to strengthen its independence it would be swallowed up by either the Republic, or possibly even the Mandalorian crusade. His dream ended in failure but before the Republic had managed to gain the planet the young Iridonian had grown to be very popular amongst young hotheads, and the more prideful of the planet.

As such he surprisingly would be able to take the senator seat granted to Iridonia by a thin margin, but it the seat was his. He had plans for Iridonia dominance, and if neccisary he would use the Republic to get it. In his eyes the pacifistic Republic was merely a pack of cowards hiding behind numbers. He would make them throw that aside or see Iridonia join a nation which could bring it the glory it deserved.


ROLE-PLAYS:
Taken 2(Triko's Fungeon)
Triko attempts to kidnap the senator of Iridonia
Looking for a way in
Trash from the Tahv

Training Threads:
Crux of the plan
The plan remains, but the tools change