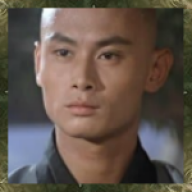 Having been trained from a very young age, his body is strong and toned, in contrast to his short stance. Being trained as a warrior monk, his head is traditionally shaved, with 3 small incense burns on the back of his head. His sharp features are quite striking, however it is mainly his fists that are his main asset. His knuckles are extremely conditioned, having a rock-like effect on his fists. He wears iron rings around his forearms, differing in sizes, to help him improve his arm strength and attack speed, being in a state of constant training. He traditionally wears a dark grey robe when he isn't training, however it is also weighted, traditional of someone who trains in Gand martial arts.

However, his most recognisable feature is the tattoo on his back, the image of a fist breaking through a steel board, meant to imitate the famous "Piercing touch" technique, being able to break through all assortments of materials, a sign of someone who has trained as a Gand Monk. As a byproduct of this however, most of the time he wears heavy wrappings on his knuckles, as they are in a state of healing for most of the time, due to his lack of care for the condition of his joints during training.

He is very light on his feet, due to both the limited diet on the Gand homeworld, and because of the necessary stature needed to achieve some of the feats expected to be performed as part of his old training regiment. 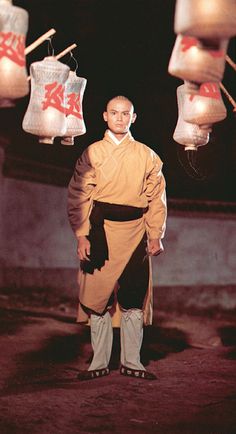 
- Personality -
Those who know anything about him, will know Aoman is one of the most irritating men alive. One of those men who come once a thousand years, born to constantly irritate the strong, and be a nuisance to all he follows. But this is not due to an annoying personality, this is due to his incredible ego. He relishes a moment to talk of his feats and skill and let all around him know of his superiority, his skills and his agility.

Even taking all of this into consideration however, he is an extremely hard worker, almost to obsession. He starts training at 6 am, and finishes at 5 pm, working every part of his body, and focusing his mind, which has given him a strong will, believing he can complete any task by simply applying himself to it. However, this has made him foolish and rash, and makes him strut his bravado wherever he goes, to whomever he talks to.

He hasn't any real social skills to speak of if you ignore his quick wittedness. Being a monk for 24 years doesn't develop a great orator or smooth-talker, but he thinks his martial arts skills make up for it. He's never been in a relationship, mainly due to the fact he has never met a female of any other race apart from Gand, which can get... dull. Although, he doesn't think it holds him back, but hopes it's something he develops now he has left the temple.


- Strengths and Weaknesses -
+ Extreme Fist Strength: One of his main assets is his hand and fist strength. Although he is still considered an amateur in the eyes of the gand monks, he can still punch through wooden boards cleanly, and dent metals.

+ Seasoned Martial Artist: Being trained in Gand martial arts from a very young age, he has since become an adept fighter in its style, being swift and agile, strong and cunning. Although his experience is lacking, the groundwork for a strong fighter is there.

+ Unbreakable Will: Due to many different reasons, his willingness to carry on in the least likely and most unhopeful situations is unmatched in his eyes. If he were to draw his last breath, he would go out fighting, still spouting his egotistical and foolish nonsense.

+/- Rash Decisions: His massive, insatiable ego hasn't made his decision making skills all that good either. However, this can aid him in certain situations, as he can get a job done that everyone would think would be foolish or all-out stupid. But most of the time, this is a big burden, especially in the middle of a fight.

+/- Pain Tolerability: One byproduct of his intense training regiment is his body conditioning, which has left most pain unnoticeable to him, which is a blessing and a curse. He can ignore most pain in a fight, and keep at top condition for longer, but this can leave him in a bad state post battle, meaning he has long healing times, which - ultimately - only makes matters worse.

- Buried memories: Some of the events that occured during his time at the temple have left deep scars, tracing all the way back to his childhood. The training, the lifestyle, the sacrifices. He's been stripped of many things, many he consented to, many he didn't. Sometimes this can seep into battle, having lapses in memory or personality, forgetting where he is, or who he is.

- Ego: His life of proving himself to others has left an impression of blind ego. He believes he is the best at all he does, and challenges many, thinking he can succeed. This can lead him into less than likely situations, which can often get him killed. It also doesn't help him build any relationships either, being hated or resented for his personality.

- No social skills: Living with a bunch of incoherent monks for most of his life hasn't made him even a little charismatic. He hasn't made any friends since he travelled to coruscant, mainly because no one wants to speak to a short, robed monk, either because he looks like a homeless Jedi, or a homeless man.

( OOC Comment: Basically i want to leave his life before training in the temple out of this, and let is bleed through role-play, want the mysterious vibe )

Life was rough. The Gand were not gentle, kind, or careful. They weren't going to make exceptions for a small boy, no matter where he had come from. The temple was massive, an overbearing structure that dwarfed anything Bak had seen. Its grand beams in the main hall spanning for 200 metres, a testament to the time, effort and sweat put into building it. As Bak would walk through, the monks would give him dirty looks, a human in such a sacred place. Disgraceful. He was given only the bare necessities to survive, a very small room, no windows, and nothing but a stone floor to sleep on. Hopefully some sleep, he thought, would make the day better.

5 AM he was woken from his sleep, and dragged into a courtyard. It had clearly been there for 100's of years, the stone floor being engraved with hand symbols and finger paints. The leader of training stood at the front, the yard filled with similarly robed monks. He got more than a few odd looks, as all of the complex movements and sets were lost on him, and he desperately tried to copy what he saw, he didn't want to be punished, the last thing he wanted was to be punished. They then moved onto running, 9 kilometres a day... As a 7 year old, he clearly couldn't run that much, and fell behind as quickly as they began running. They all scowled at him with their sharp, lifeless eyes. There he was. The man who brought him here. He grabbed him by the arm, clearly angry, he dragged Bak into a dark room, deep in the temple. it stunk. It was an empty room, apart from a few dark shadows in the background, and what looked like red marks on the walls... "Learn" Is all he was told, as he was stuck in front of a large and think wooden slate. The man looked at him, and struck the board with such force, his fist passed through it, not snapping it in to, but creating a perfect hole through the centre. "Hit".

Role plays:
You must log in or register to reply here.