Another round for ya ​
​
​
A Cantina located somewhere on Mandalore buzzed with life, various species from all over the galaxy socializing and enjoying their drinks. As people continued about their lives without a care there sat a man in the back corner in a booth that was dimly lit. Red and black Beskar'gam. His Buy'ce sit on the table a drink in his hand as he sat and watched the life around the cantina listening to the music as he enjoyed his drink. This man was A'den Kyr'am, a member of the Mandalorian Empire, a war veteran and hero. He was also the Alor for the Mandalorian clan Prudii Kyr'am. A'den took another sip of his drink watching a green twi-lek dancer flirting with some human smuggler, probably trying to swindle him out of credits. A'den simply smirked and shook his head. A'den has always thought the female Twi-Leks were beautiful creatures, hell his first wife was a rare red twi-lek.​
​
A'den then turned his attention to the bartender serving various drinks to other patrons, one thing he noticed was that there was none of his kind, mandalorians no vode in this cantina, or none that he could see over the vast variety of people buzzing about in the place. Kind of interesting that this place was on Mandalore and he was the only Mandalorian in here, but oh well, he simply shrugged it off and continued to watch the other people as he took another sip of his drink. This time A'den's attention turned to a Sabacc game being played by two alien species across the cantina. Good game sabacc, A'den was at one time good at it but he gave it up.​
​
A'den sighed relaxing his thoughts now dwelling on the past, surprised at how grown [member="Ginnie Dib"] and [member="Yasha Mantis"] have grown, little Yashy now Mand'alor, holy crap, and Ginnie getting married, WTF. He remembered them when they were young, but hey it's been a while and he was gone for a while, but in this new Mandalorian Empire he is glad at least two people remember him and what he has done for his people, his culture, his vode. Now he just has to show all these new guys what he's made of, a task that won't be easy but will come in time. A'den nodded to his thoughts and then took another sip of his drink and sat back and relaxed in his chair continuing to watch everyone have a good time.​
​
(Open to anyone in the ME)​

How often did she visit mandalore? As of late it was not much, in fact it had been nearly a year since she had visited its surface. She stepped out of her ship and looked about. Helmet on her side as she took a deep breath in then out and started forward. On her armor now was the mark of Australis, her new family. She stopped in front of a cantina and gave a smile. She could use a good mandalorian drink wine only went so far she needed to feel the burn.

She pushed open the door, music hitting her ears as she smiled, she made her way towards the bar and sat down as she relaxed. Looking around the place noting she didn't see many vod around...except for that one in the corner couldn't miss that red armor like crimson blood had stained it. She looked ti thr bartender and spoke

strongest you got please

Character Bio
A'den noticed the green twi-lek walk in and go to the bar. He noticed her look his way and he nodded to her and raised his glass to her and took a drink smiling happy to actually see another vod in the cantina, A'den then went back to watching the other patrons thinking it's nice to see another mandalorian in this place.​

She glanced back to him and gave a smile nodding as well, she took her drink and stood, it had been some time since she had mingled with other mandalorians. She came up to his table and gave a smirk

room for another vod?

She said with a smile motioning to the seat across from him. She had on her side her helmet, two sabers, two westars, and a sword. Normal outing for her honestly something she always kept on her side

Character Bio
A'den nodded waving his hand to the seat. be my guest vod, pleasure to share a drink with you. A'den took another sip as he looked her up and down and awaited her to take a seat, his twin beskads in the Booth next to him, his scar may not be attractive but he was after all a war veteran and a hero but very little actually knew it. A'den admired the twii-lek's features as he was always fond of the female version of the species.

She herself even with such wonderful features was marred with scars, herself a veteran of many conflicts and many many wars. She nodded and took a seat setting her helmet down and sighing as she relaxed back

thank you been some time since I could share a drink with a vod, too long in fact

She took a long drink, grimacing at the burn then smiling as it relaxed and simply warmed up her body before she turned her attention back to the man before her

so what's up with you vod? And might I know your name 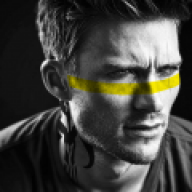 Character Bio
Zevos was visiting his parents on mandalore when he needed a drink so he went down to the cantina. He walks in the cantina immediately the music filled his ears he went to go order his drink but on the way up there he saw A'den

Oh you have company sorry about that i'll leave you two to it.

Zevos walked across to the other booth and took a seat and waited for his drink stretching out his legs and relaxing.

Character Bio
A'den noticed his verd'ika and nodded to him and then watched him go take his seat and then A'den turned his attention back to the elegant twi-lek and nodded to herself. Indeed my name is A'den Kyr'am, the Alor of the aliit Prudii Kyr'am. Might I ask for your name darlin'

A'den takes another sip of his drink enjoying his present company as he relaxes and sits back, takes a breath and again starts admiring the twi-lek again.

Character Bio
Stardust Australis Skirae of clan Australis, queen of zeltros and imahalyan just so many titles honestly none that matter but my first and last name

She said and took a drink, she pushed the glass back a bit to set up so she could properly talk to the man before her, she offered a friendly smile

pleasure to meet you, A'den I'll admit my shame of not knowing your clan at all...I have barely begun to work with the clans again

Character Bio
A'den nodded to her statement it's not unusual that newer people would remember his aliit because of the past. it's alright most people haven't, my aliit faded into darkness a few years back after I was presumed dead from a self sacrifice to save the mandalorians, and it's a pleasure to meet you as well.

A'den took another drink then waved the waitress over for another drink.
You must log in or register to reply here.

[Mandalorians] Shades of the Past
2