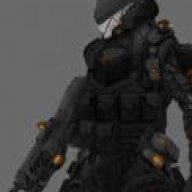 Description: The Khmali class of weapons was created to be the successor to the Khopesh line. Thus, these weapons are a great improvement over the older designs. The K-Mart in particular sports a rigid body that holds a familiar shape for rifle and scattergun users alike. Also improved with this weapon is its modularity, as there are four separate rail lines that can be used as mounting points.
The MAR Type A also features a dual magazine system. The first magazine holds the energy for firing the weapon. The second acts a heatsink. As the weapon is fired, the heat is vented into the thermal magazine. The thermal mag is automatically ejected once temperatures reach high enough levels. This allows for the user to fire the weapon for an extended amount of time before having to reload the weapon, as all heat is directed away from the energy magazine.
The KMart excels in medium range combat, with a heavy accuracy dropoff after about 500 m. In close range combat, the rifle has the ability to perform well, as a scattergun could easily be mounted underneath, however, this can compromise the weight distribution, affecting comfort and accuracy.
Since the weapon is designed to withstand continuous fire over a relatively long period of time, the barrel has excellent accuracy when hot. When cold, however, accuracy suffers. First, second, and sometimes third shots can be off-target, which is why rapid fire is recommended when the rifle hasn't been fired in a while. Once the barrel heats up, it retains its heat for quite a while, so sustained fire becomes more accurate over time.

Interesting quirks to the weapon. I don't know why the weapon would be inaccurate while cold, but I like it.