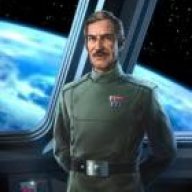 Character Bio
There you go...


Ship and item's : until our dev thread moves along I have no official ship.... so ya , just an average blaster pistol, remnant uniform for an officer, clearance codes for command

Niesa was always a die hard ambitious man, no matter where he went in life he would just simply be the best at it if he could. This caused him to graduate in the sith academy before the imperium rose. because he was revered as a good and devious leader many of his own men followed him wherever he went. So when he was sick of having to listen to self proclaimed god's. They went along with him, he closely works with tyrock the commander of the ground forces. giving him the air support he need's and the coverage to land on the planet and do their thing. So logically when the imperium fell as stated before he went into the imperial remnant doing what it takes to fight for what he believes in. If he ever were to get into a gun battle or a close quarter fight alone, he may not be able to strategize against them but he certantly can use his wit's to slip away from his enemies. When niesa was made an adirmal it was not threw bribery or corruption but leverage and black mail. So yes could you kill him openly probably.... but would you get the chance to ever come close enough to him to do it ? most likely not.