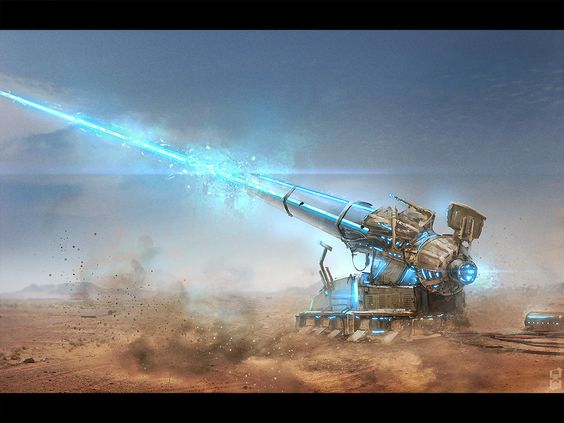 DESCRIPTION
The AAC-42 is a heavy artillery machine that can only barely move on its own, but which can take down capital ships and fortresses before they’re even within visual sight. The raw power behind each shot is enough to break most shields and easily rip through armoring, if not break the entire ship itself due to the impact. Because of it’s massive size and armoring, it’s very hard to damage. But also very hard to miss. Transporting the AAC’s is an incredible trouble, aside only from getting them planet to planet requiring considerable sized ships, making disguising their use almost impossible, the AAC’s are probably some of the slowest vehicles available. They require the combination of tracks and hovercraft technology to get moving, and use the hovercraft tech to try and prevent the AAC from slamming itself into the ground when firing. These extremes of power at the loss of discretion and speed make it excellent for lasting battles, but would be a liability in short land locked battles that required maneuverability of forces. Since it has no other weapons than the main cannon, it also needs to be supplemented by allied forces. Often both on ground and in the skies. Detro
Hi there I will be looking at your sub today

Ravenfire Hello and thank you.

I don't suppose I could make anything extreme for that? I didn't want to make it over-powered and knew that I was effectively making a weapon you'd normally find on a capital ship, or which couldn't move at all. If I can't make one extreme for the exchange of the -4 then I may move something a little bit, but it'd probably just be moving up the speed.

You could bring up your cargo capacity to a very high which would re-balance everything out just right
You must log in or register to reply here.