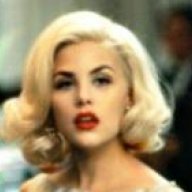 The stage was set. Thick velvet curtains hung across a large semi-circle, the outer edge adorned with lights that glowed a dim yellow. Behind them a lone woman stood, clothed in a black dress that hugged her figure and trailed just below her feet. Alice's white blonde hair hung at her shoulders in her usual fashion and her lips had been painted in a crimson red. A shocking contrast against the dark colour of fabric and her pale skin. Just another night in another club, just another song. Though Alice enjoyed her work greatly the same scene's were getting dull. She was looking forward to the long awaited Galaxy tour, though it hadn't been announced yet.

The Host, a well respected club, was a large building designed for none other than the rich and famous. It's interior had been decorated with the most spectacular furnishings. Polished wooden tables were placed randomly around the large open space and balcony above, each with a various amount of chairs surrounding it. Around them sat well dressed men and women, discussing typical matters of money and world trades. The lights began to grow dim and the hum of the club slowly died down.

The curtains drew back and she drew in a heavy breath of smokey air. A gentle, seductive melody began pouring out of the band, settled a little way to the right of the stage. The spot lights drew in to focus on Alice and an all too familiar smile spread across her lips. After a few moments, they parted, and the first few words began to pour from her mouth like honey. The notes comforted the young woman, her body instantly relaxing to the music coupled with the sound escaping from her chest. To Alice, this was heaven.

There was something about upscale nightclubs that drew the rich and powerful like moths to a flame. The Host was no different. Seated around the tables strewn about the darkened club were men garbed in the finest suits. On their arms were women; some wives, some escorts...and even some secretaries attempting to get a promotion through entertaining the boss. Prior to the parting of the curtains, there was laughter and conversation filling the room; and cigar smoke made the air putrid and cloying. Yet these facts did not deter the sharply-dressed Enforcer this evening, for he was more than used to them. With a single vibroknife in hand, Ishmael Verd calmly strode about the Club, carefully scanning the patrons who were present. The face of the target was burned into his mind from the information read beforehand, and so it was simply a matter of making out his rather unremarkable face: old, fat, and riddled with liver spots.

His eyes, stained orange by the Dark Side, continued to sweep the room...until finally, the target was found. 'Twas an aid to a Republic senator, one who had crossed the wrong businessman. Ishmael did not much care about the who and the crime, however; only the paycheck. Taking a spot of cover behind a counter, he then raised the knife through the Force; hovering it before his eyes. He then, relying upon the darkness of the Club for cover, launched the weapon through the air and burrowed it into the rear of the man's head. He, already drunk, slumped over; causing laughs to erupt from his fellows. Then, all eyes were placed upon the stage, for the curtain was rising. Ishmael, too, looked on and rose from his hiding place. What he saw...took his breath away. He had heard of a rising star that sang across the Galaxy at concerts and clubs, but he had yet to see her.

Though the job was finished, he tarried just so he could hear the woman sing. Calm steps bore him through the tables and to the front, where he claimed one of the seats closest to the stage. Looking up, he then smiled, listening to the sweet melody that came from the goddess on stage.

Alice sang two or three of her most well known songs. Her choices fit in with the crowd almost perfectly and her voice accompanied the music as if it were made to be. At the height of her last song, her eyes seemed to drift to a close as the long, proud note filled the lounge. As the music faded into nothing, her eyelids flickered open to catch the face of a very handsome man. All at once a very blushing grin appeared on her face, directed at him. For a moment, she almost forgot she was standing on that varnished wood, in front of a few hundred people. As the applause erupted she was snapped back into reality and the flushed pink of her cheeks faded into nothing. She made a few customary curtsies, a few waves and a quick thank you, before walking at a pleasurable pace off the stage.

She was in a particular rush to get out of the bodice that stopped her from taking a proper breath, but she wasn't sure the bodice was the reason any more. Instead of heading for her dressing room, Alice headed straight out of the stage door and into the lounge itself. Turning her head and scanning the crowd, she made a quick inspection of the crowd. She cursed mentally as she scanned, it was always so damn hard to find people in this place...

Character Bio
Although the sordid deed of taking a life was done, which would typically prompt a swift exodus from the establishment...Ishmael found himself rooted in place. The voice of the woman standing upon the stage quite literally captivated him; so much so that he was comparable to sailors ensnared by the songs of Sirens. As the minutes rolled by, the clone found himself on the edge of his seat; eagerly awaiting one song after the next...until the final note rang out. This moment was both somber, yet a source of exhilaration; for Ishmael thoroughly enjoyed the symphony which escaped the lips of [member="Alice Shaw"]...yet felt a cold in his heart when he realized that the show had come to an end. The reason being, he had deluded himself into thinking that he saw something...amazing...whilst she serenaded the crowd with her angelic voice. He honestly believed that she looked at him and that a crimson touched her cheeks for the briefest of moments. However, as the music concluded and the applause rang out, Ishmael began to address reality.

Of course she wasn't looking at him. She was looking at the whole crowd. He was nothing special, after all...simply a copy.

Having risen to his feet in order to give a proper ovation to the rising star, Ishmael then began to follow the crowd and head for the exit. However, as he began to ascend the small flight of stairs that led towards the establishment's front, he turned to look at the stage once more. 'Twas a simple act that placed his eyes right upon the woman who had captivated him for several minutes...which then prompted his fanciful thoughts to return. With boldness characterizing his steps, Ishmael turned around and strode calmly towards the singer. As he drew ever nearer, a light (and nervous) smile formed upon his face. "Miss," he began, giving her a polite nod, "I have never heard anything as beautiful as your singing in all my days...You are phenomenal at what you do."

Alice caught him from the corner of her eye, though a little too late. He was already standing in front of her when she managed to manoeuvre the crowd enough to see him properly. She inhaled. Her heart was in her throat. For a few moments it felt like the din of the club faded into nothing. They were the only two there. A nervous smile touched the corners of her lips as he addressed her. She could do nothing but widen the smile on her face, till the whites of her teeth flashed in the dim light of the lounge. His voice had forced her legs to turn to jelly, and Alice had never been more grateful for the feeling. "Thank you..." She paused, lifting a brow as if she were expecting something. It took her a few moments before she came to the conclusion that she should actually ask.

She shook her head, closing her eyes as she fought to regain her focus. When she finally managed to speak the faded pink colour had returned to her cheeks. "I'm sorry, what was your name? I haven't see you around before..." She couldn't help but nibble on the plump flesh of her lower lip while she waited. She felt lost in his eyes, drawn in by the marble effect the atmosphere created.

[member="Ishmael Verd"]
You must log in or register to reply here.

A jedi, but not officially [Private - Ben]