A Meeting of the Minds... Sort Of 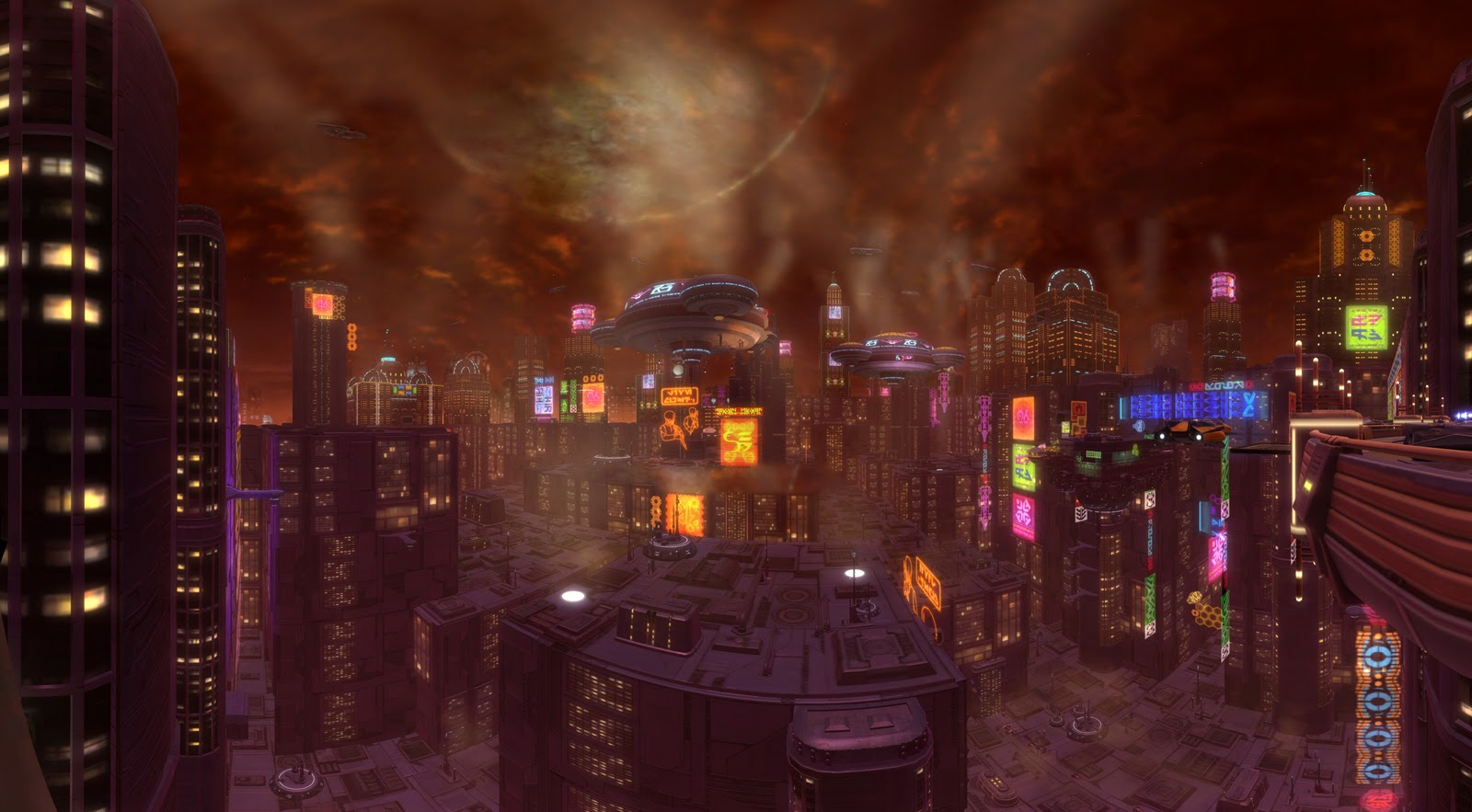 ​
Nar Shaddaa. The Smuggler's Moon. No matter who you were, or who you worked for, most came through here at some point. Whether looking for something, or simply trying not to be found. Without a doubt, it was the one place in the galaxy where anyone could be no one. That made it the perfect hideaway..

Arms swaying loosely at her side, Ventasia moved through the crowded streets. With no particular destination in mind, her eyes simply watched her feet they alternated steps. One look at the normally upbeat Corelian and anyone could tell there was something off about her. The usually vibrant crimson hair was dull and listless, even unkempt. Her eyes nearly matched the hair, an obvious sign of a significant lack of sleep. Though above of this, there were two things that stood out. First off, Ventasia was on Nar Shaddaa and sober. That was a bad sign no matter how one looked at it. Secondly, there was no running after dancers. No chasing the women of ill-repute that surrounded her. Completely and utterly, it was like she was a different person.

A small sigh slipped from her lips as her feet finally came to a rest. Her head rolled back as she looked up a the lights and moving speeders above. Why was she here? What was the point of seemingly hiding in plain sight? Who knows.. Stopping in the middle of a Nar Shaddaa street was usually a very bad move. If one wasn't knocked over one might be pick-pocketed or accosted. However even the denizens of the Smuggler's Moon seemed to have enough sense to avoid picking trouble with Ventasia.
All except one person anyway, and she wasn't exactly a denizen!

A woman suddenly appeared in front of where Ventasia stood, but respectfully enough away so as not to be a threat. "Ms Terana? Apologies for the interruption, but do you have a moment t talk? " she asked with a smile. "Name's Tamara, pleased to meet you."

A voice... A large part of her was hoping that no one would attempt to garner her attention. That she could simply and easily slip into the society of this planet without any unnecessary or extra attention. Sadly, that was not to be the case on this night. Apparently, even on a planet known for its seedy habitants, she could not escape those whose tongue knew her name.

Ventasia's eyes shifted form the skyline of the night to fright in front of her, falling upon the brunette who stood there. Two things were obvious immediately. One, this one was easy on the eyes. Very easy. In fact, if not for recent events, the chances that she would have pounced on the woman and buried her face in her chest was extremely high. Secondly, this one was unfamiliar to her. She'd made her way about the stars quite a bit, she kept herself as low a profile as she could. If for no other reason than to avoid awkward meetings like this. But lets be honest for a moment here, folks. With a personality like her's, it was unrealistic that her name wouldn't get around. Not to mention the way she acted towards others. Nope, she screwed herself from the day she started acting like....herself. Anyway! Back to the situation at hand..

With a heavy sigh, her head returned to its normal, upright position, eyes still fixed on the attractive brunette. "Tamara, huh? I guess, even without doing a thing, my reputation proceeds me. If your here to fight, I don't have it in me, so do as you will. If your trying to collect some type of bounty, just say so. I'll probably come along. And if you from the Republic.." Ventasia pressed forward a few steps, closing the distance between the two. "Feel free to go to hell." Her eyes remained locked on Tamara's, a historic first for her, having said her peace.

Tamara laughed. “None of the above, actually. I’m not really a part of anyone, and I don’t fight unless I absolutely have to, and bounty hunting is, well, a bit crass. No, no, I’ve actually been looking for you, and a mutual acquaintance pointed out you’d like be on this planet. Did you want to get a drink? I won’t detain you long.”

Well, this was...unexpected. But what could she say to the woman? She certainly wasn't in the mood to argue, nor did she want to have someone following her about in a wild attempt to gain her attention. It wasn't like she had any weapons, so the chances she could actually do any harm were pretty slim. And it wasn't like she didn't need a distraction from the recent events. If she believed in fate, she'd think this was it. But, since it wasn't. she could at least get as drunk as possible.

Her hand rose to her face, rubbing at her eyes. Once more, she sighed before motioning towards the woman. "Fine. Whatever. Lead the way. Try anything funny though, and I'll send you flying halfway across the planet." Even her threat lacked the usual zing that was her signature. In her condition, she probably wouldn't lay a hand on someone screaming obscenities in her face.

Tamara did indeed the way, stepping over an unconscious being of indeterminate race. "Only halfway? How disappointing, I was hoping at least for three quarters!" she said with a backward smile.

A cantina lay before them. It was of the traditional 'gloomy cellar' variety. Smoke of various sorts hung in the air, drinks of many colours were laid out on bars or tables. It was a place where every table contained a shadowy figure, every alcove a wanted person. It was not the sort of place which put candles and flowers out...not unless they wanted them eaten anyway.
Tamara gestured to the bartender that she wanted two of whatever was served. When it was delivered she handed over credits.
"Hmm, the local rotgut, it seems. Well, it could be worse." She downed the glass of alcohol in one, twitching just a little. "Well...it could be worse, but I'd have to search hard to find something which is worse!" she joked.

"Ha, ha, ha." She mocked the woman with a false laughter as she eyed the unconscious being on the ground below. For the first time in ages, watching the helpless and obviously drunken alien, she felt pity for someone. It wasn't feeling that she really new that well. The loss of her friend had seemingly opened her heart up. She kneeled down, patting the being twice before digging into its pockets, pulling whatever credits she found within and shoving it in her own pockets. Indeed, she felt pity for the poor sap, but not that much pity. You snooze you lose. She moved forward to keep relatively close to Tamara.

Ventasia sauntered into the cantina behind the woman, eyes looking about. It was a crappy place, but she'd definitely been in worse. As far she was concerned, it was normal for this planet. Following behind, she reached the bar counter just as they were served the two drinks. Looking over to the woman, she could only watch in horror as she actually guzzled down the viscous liquid. Seeing her reaction, she grabbed the glass pouring the drink onto the floor between them. Her eyes widened slightly as it began to bubble a bit upon contact with the grimy floor. No way that was going in her.

Returning the glass to the bar, her head shook slightly, forcing an odd grin. "Yeah, anything worse would probably have you pushing up roses. So, what brings you all the way out here to find me?"

The Red Scar​
You must log in or register to reply here.

A Meeting Of Minds

A Meeting of Minds [Vexander]

A Meeting of Minds

Crimes of the Mind