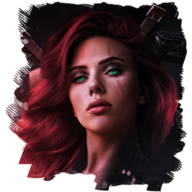 The Ascendant Circle hall. It was a place very few knew of, and even fewer had seen it for themselves. Only those who rose up to claim the mantle of Sith Lord or Lady were permitted entry and inside matters pertaining the empire were discussed, Knights were elevated to become their equal much like how Darth Avacyn herself had been, and other events that required the presence of the empire's most powerful took place. To say she trusted all those who had shared this hall with her this meeting however, or rather any meeting at all, couldn't be further from the truth. Some she knew they could be trusted for as long as the empire thrived, but the group was exceedingly small.

One of those people was the Dark Lord himself. Darth Carnifex and Darth Avacyn had met on a small number of occassions in the past, and there was a clear mutual respect between the two. Although perhaps their reasons for wanting to ensure the empire's position within the galaxy were different, they were unifiable and without a doubt close to the core of their beings. For the woman it was a simple wish to keep her wife from harm, but soon it would not just be Ishana she wanted to create a safe home for.

What was kept hidden from the other Lords and Ladies, was the fact she was pregnant.

Soon that would require her to take an extended leave of absence from her duties as a Lady of the Sith, but as long as her figure didn't betray her Avacyn would remain active. When the time came though, it would be only Kaalia that showed herself to the outside world. Darth Avacyn would only return when she could be amongst her peers without being forced to reveal she had a family.

Still, that was something to be dealt with in the future. For now, as she walked through the hallways that lead to and from the hall itself, her focus lied on slipping back into being Kaalia again, for Avacyn no longer needed to be there until she once more had a reason to embody the Sith that lived within her.

[member="Invicta Zambrano"]
You must log in or register to reply here.

Of Pirates and... Pregnant Ladies?

A
Private Lights, Ladies, and Depression