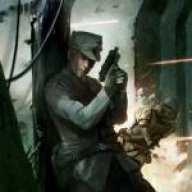 OUT OF CHARACTER INFORMATION
Intent and Role: As a mechanized force under the writer's primary character, this unit will be filling a RRF/mechanized assault capacity for the Sith-Imperial Legion; whether fighting alongside other units as part of a wider campaign, or individual elements peeled off for minor skirmishes across the various battlefronts.

Description:
The 209th's personnel follow the trends of armament, dress and insignia among the wider Imperial Legion, with the only variations relating to their battalion iconography and the settlement on urban environment camouflage for their armour and BDUs. Companies are denoted over comms. by Aubesh alphabet, following by the relevant unit and squad position number (eg: 'Kappa 3-6' would denote the commander of the third AT-HE squadron's commander.

Their battalion's emblem - aside from the standard Legion crest - is a brazier surmounting twin crossed swords, with their battalion numeral written in Imperial Aubesh beneath.

Combat Function: While broadly similar to the organisation, armament and tactics of the wider Sith-Imperial Legion, the 209th Battalion is primarily specialized in mechanized warfare - utilizing effective use of fire support, walkers and fast-moving infantry - and in urban operations. Semi-independent command by their CO, in conjunction with other forces, allows them a degree of flexibility to pursue their objectives with minimal 'locking in' of their unit into otherwise-disastrous assaults. On garrison duty, the 209th follows variations in Legion occupation doctrine laid out by their commander, which is comparatively lenient compared to some within the Empire.

HISTORICAL INFORMATION
[ Include a description of the unit’s history here. How they were formed and by whom, past noteworthy battles, moral affecting defeats, where they are stationed if applicable, etc. ]

I am archiving this submission for inactivity. Please contact a member of codex staff to have the submission removed from the archives if you wish.

[Work In Progress] To Arms!